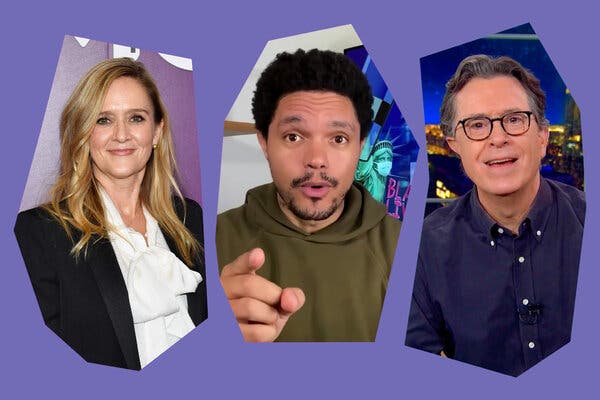 Despite Donald J. Trump’s loss to Joseph R. Biden in the presidential election of 2020, late-night hosts still couldn’t shake the former president in 2021.

Trump’s last day in office was cause for celebration on many shows, but the Capitol riot on Jan. 6, Trump’s subsequent impeachment and his supporters continued promotion of the lie that the election had been rigged meant that the former president remained a fixture of monologues and other late-night bits.

Also, Biden apparently is just not as easy to send up. The hosts’ impressions of him lacked the cartoonish verve of their Trump takes — Stephen Colbert in aviator shades is the only one who makes much of an effort — and while Biden’s age and occasional gaffes were frequent targets, such jokes rarely occupied more than a few minutes of the nightly monologues.

Another defining trend this year was the hosts’ return to their studios after shooting their shows from home for most of 2020 and much of 2021. Colbert, the Jimmys (Fallon and Kimmel) and others brought back audiences (with Covid-19 protocols in place), live bands and in-house guests who offered a bit of normalcy to viewers looking for an escape from the coronavirus and its variants, or at least a way to commiserate through comedy.

Not so Quiet Riot

The events of Jan. 6 were particularly of interest to Colbert, who went “unexpectedly live” for that evening’s “Late Show,” chastising Trump supporters.

​​“Hey, Republicans who supported this president — especially the ones in the joint session of Congress today — have you had enough?” Colbert said. “After five years of coddling this president’s fascist rhetoric, guess whose followers want to burn down the Reichstag?”

Hosts also stayed on top of the fallout, including the prosecution of rioters like the so-called QAnon Shaman, Jake Angeli; and yet another Trump impeachment, for “incitement of insurrection.”

As the ensuing trial in the Senate neared its end in February, the “Late Night” host Seth Meyers pointed toward an outcome that was never really in doubt — an acquittal thanks to Trump’s Republican support — despite the presentation of even more disturbing and explicit video from the assault.

Over on the “Late Late Show,” James Corden deadpanned: “We’re so close to figuring out who’s responsible for this. What a mystery.”

Samantha Bee took a different angle on the forces that led to the Capitol riots. In a segment on “Full Frontal,” she focused on the women of the movement, highlighting who they were and their role in the dark moment in U.S. history.

“White women are playing a massive part as well, particularly when they tell themselves they are protecting families,” Bee said. “The messaging they use is insidious, pervasive and loaded with undertones of white supremacy. It may look pretty, but it is dangerous.”

In March, hosts commemorated the one-year anniversary of the coronavirus shutdown, as the virus raged on. On “Jimmy Kimmel Live!,” the host celebrated the occasion with a gag that called back to the panicked early days of the pandemic.

“The traditional gift for a one-year anniversary is paper, so I figured toilet paper makes the most sense,” Kimmel said as he tossed out rolls to his audience.

Covid and its ongoing impact came up throughout 2021, of course, especially as vaccines became widely available and extremely politicized. Even Big Bird couldn’t escape conservative attacks after “posting” on Twitter that he had received his shot. At around the same time, the Green Bay Packers quarterback Aaron Rodgers was skewered for having fibbed about getting his. On “The Tonight Show,” Jimmy Fallon found a way to thread both stories into one monologue joke.

“It’s a big day, actually, for Big Bird,” he said. “Because immediately after getting vaccinated, he was signed by the Green Bay Packers.”

As the virus ramped up internationally with variants like Delta and the new Omicron, hosts frequently took anti-vaxxers to task.

“I mean, how did that happen after everything we did?” Trevor Noah asked on “The Daily Show.” “I mean, for two years now, people, we wore masks for some of the time, we social distanced when it was convenient, then like half of us got vaccinated — what more is it gonna take?”

Try as he might to enact sweeping legislation, Biden struggled to get anything past (or passed by) Republican lawmakers in 2021, including enormous stimulus and infrastructure packages. Late-night hosts sympathized with the president and lauded efforts like the $1.9 trillion coronavirus relief bill, which passed in March with no support from Republican lawmakers.

“It will give Americans more access to health care and boost the vaccination rate,” Kimmel noted. “So naturally, Republicans are against it.”

As the infrastructure package was whittled by Democratic intraparty disagreement and negotiation — much of it involving Senator Joe Manchin III of West Virginia — Meyers quipped that the bill’s health care proposals had been trimmed to “a 30-day trial for WebMD Plus, and they’re going to paint some tunnels on a rock like Wile E. Coyote.”

The American public hasn’t given President Biden much support either, at least not in opinion polls; his approval ratings have dipped substantially. Even still, hosts try to find the funny, as when Kimmel used yet another age joke to call for patience.

“We’re also not even a year into his presidency,” Kimmel said in November. “Don’t worry, he’s like Grandpa at the wheel. He’ll get us there, it’ll just happen very slowly, with the blinker on the whole ride.”

As the rare Black late-night host — and the only one with a nightly show — Noah continued to speak for people of color, putting the spotlight on racially motivated attacks. He employed a somber tone, but pulled no punches in criticizing America’s gun policies and systemic racism.

“Why are people so invested in solving the symptoms instead of the cause?” he asked after a gunman shot and killed eight people in Atlanta in March, including six women of Asian descent. “America does this time and time again. A country that wants to fight the symptoms and not the underlying conditions that cause those symptoms to take effect — racism, misogyny, gun violence, mental illness. And, honestly, this incident might have been all of those things combined, because it doesn’t have to be one thing on its own. America is a rich tapestry of mass-shooting motivations.”

During an April show, Noah addressed police brutality after the deaths of Daunte Wright and Caron Nazario, dryly suggesting that Black people “start singing ‘The Star-Spangled Banner’ when they get pulled over.”

Kimmel maintained a connection with some of Trump’s biggest supporters, including Senator Ted Cruz of Texas and Mike Lindell, the excitable chief executive of MyPillow. Cruz, in particular, was a regular target of Kimmel’s ire, especially when he flew the coop for Cancun during a debilitating winter storm in Texas in February.

“While his fellow Texans are freezing with the power out, Ted Cruz did what any great leader would do when his state needs leadership most — he booked a flight to Mexico and said, ‘Adios, amigos!’” Kimmel said. He called the senator a “snake on a plane headed, ironically, to the very place he tried to build the wall around.”

While Cruz lashed out at Kimmel on Twitter in response to the host’s gibes, Lindell seemed to see Kimmel as a worthy adversary of sorts, confusing the host’s mockery for true admiration.

“I have no idea what he is doing, but I love it,” Kimmel said in May, after Lindell brought him up several times on his newly introduced livestream “yellathon.” Kimmel then invited Lindell onto his show, which he happily accepted.

“Have you been vaccinated?” Kimmel asked as Lindell sat down across from him.

“No, I have not,” Lindell responded.

Kimmel clarified: “I meant for rabies.”

Kimmel also expounded on why he invited Lindell in the first place. “A lot of people didn’t want you to come on the show,” he said. “Liberals and conservatives, everybody said, told me, don’t have you on the show, and they told you, don’t go on the show. But I think it’s important that we talk to each other.”

In May, after 28 years of hosting his own late-night show and 11 years on TBS, Conan O’Brien announced that he was leaving late night and had plans to move on to a variety series on HBO Max. During that address, O’Brien made clear what he wanted for his last few months on air.

“I’m very proud of what we’ve accomplished here,” O’Brien said. “I’d like these last couple of weeks to be a fond look back at all the absurd madness that my team and I have concocted. Best of all, I just want to point out, there will be shockingly few, if any, references to Donald Trump.”

During his final monologue in June, O’Brien elaborated on his feelings about his career and comedy, but also his philosophy on living, saying, “I think when smart and stupid come together — it’s very difficult, but if you can make it happen, I think it’s the most beautiful thing in the world.”

Kimmel gave O’Brien a shout-out on his own show that night, joking, “Congratulations to Jay Leno on his new time slot at TBS.”

Best of the Rest

With a move to Sundays from Mondays and the addition of another weekly episode on Thursdays, Showtime’s “Desus & Mero” continued to thrive, and the Bodega Boys — as Desus Nice and The Kid Mero are known — continued to be some of the most hilarious interviewers in late night. Case in point: their conversation with Jeff Goldblum, in which the actor had just as many questions for the hosts as they did for him.

“Do you guys sing or do music at all?” Goldblum asked.

“The Amber Ruffin Show” debuted in September 2020, with Ruffin bringing the same engaging energy she first displayed as a writer and performer on “Late Night with Seth Meyers.” She and her talk show — new episodes premiere Fridays on Peacock — were even more entertaining in 2021, as seen in musical segments such as “White Celebrities, It’s Time to Wash Your Kids.”

“White celebrities/wash your kids’ booties/white celebrities/it’s your only duty/your child smells like blue cheese/and it’s your fault,” Ruffin and company sing in a Jackson 5-esque chorus.

In 2022, late-night hosts can look forward to Trump and Covid lingering on, but hopefully they can find some new material, too. Failing that, here’s hoping they at least work on their Biden impersonations.

Tags
Li̇ke Show That Who Year

Lucille Ball on the Big Screen, the Small Screen and Offscreen

How the Copy Cats Came for Clubhouse

Stephen Sondheim Leaves Rights to His Works to a Trust

‘The Hang’ Review: Taylor Mac Enfolds Us When We Need It Most