The holiday weekend is here! We want to help by taking one thing off your plate. We’ve gone through Netflix, Hulu, Amazon Prime Video and Disney+ to find the best titles that are suitable for the entire family.

Here’s one of the 50 best movies on Netflix 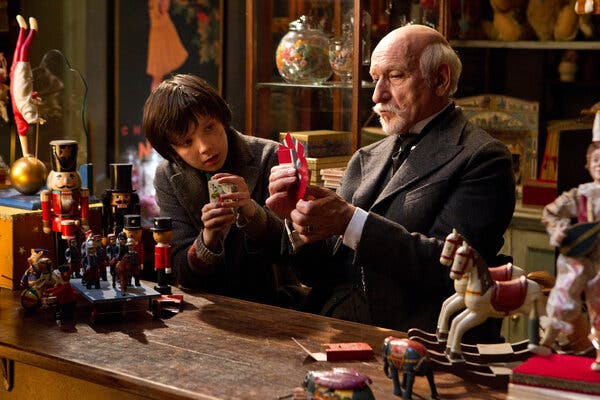 A film directed by the maker of such violence- and profanity-laden classics as “Taxi Driver,” “Raging Bull,” and “Goodfellas” isn’t an obvious choice for family entertainment. But the source material for this 2011 charmer from Martin Scorsese centers on another of his obsessions: cinema history. The titular novel by Brian Selznick concerns a young orphan boy’s love of the then-nascent motion picture form, forged in the tiny cinemas of 1930s Paris. By exploring the boy’s unexpected bond with a bitter shopkeeper, Scorsese mixes heartfelt storytelling with film history. But it won’t bore the kids, thanks to the generous helpings of slapstick comedy, jaw-dropping effects and full-on movie magic. Manohla Dargis called it “serious, beautiful, wise to the absurdity of life and in the embrace of a piercing longing.”

These are the 50 best movies on Netflix.

Here is one of the best TV shows on Netflix

A handful of home bakers gathers in a tent in the English countryside, where they make baked goods in front of demanding judges and supportive comedians. The cooking competition show has been done dozens of different ways, but there is something special about “The Great British Baking Show,” a life-affirming series in which contestants of various ages and socio-ethnic backgrounds hug one another, cry together and enjoy one another’s company. Writing for The Times, Tom Whyman called it “the key to understanding today’s Britain.”

Have a Hulu subscription? It’s a lot to wade through. We can help!

Fred Savage and Danica McKellar in “The Wonder Years.”Credit…ABC

Nostalgia tends to run in 20-year cycles, so filmmakers and television writers spent a good deal of the 1980s meditating on the 1960s — particularly the idealism of the Woodstock era, and how it faded away in the years that followed. This six-season family dramedy certainly trafficked in such wistfulness, but filtered it through a contemporary lens, as the adult iteration of its protagonist (voiced by Daniel Stern, played as a teen by Fred Savage) narrated his journey through middle and high school during this turbulent era. And the show is now seen through a prism of dual nostalgia, recalled with fondness by those who were themselves teenagers when it first aired, confirming that its stories of first love, teen awkwardness and familial rebellion aren’t confined to any specific era.

You will surely find something to watch on this list of Hulu’s best movies and TV shows.

Amazon Prime Video doesn’t make it easy to find stuff. Luckily, we have done the work for you.

The director Frank Capra and the actor Jimmy Stewart took a marvelously simple premise — a suicidal man is given the opportunity to see what his world would have been like without him — and turned it into a holiday perennial. But “It’s a Wonderful Life” is too rich and complex to brand with a label as simple as “Christmas movie”; it is ultimately a story about overcoming darkness and finding light around you, a tricky transition achieved primarily through the peerless work of Stewart as a good man with big dreams who can’t walk away from the place where he’s needed most. Our critic said it was a “quaint and engaging modern parable.”

Here are a bunch of great movies on Amazon.

Disney+ is full of older classics. Like this one.

A scene from “Snow White and the Seven Dwarfs,” the first feature-length animated film.Credit…Disney

‘Snow White and the Seven Dwarfs’

The first full-length animated feature remains a treasure and an institutional touchstone, establishing the outsized clashes between good and evil, the comical interludes and the lush house style that would endure as Disney hallmarks for decades. A princess’s beauty, a queen’s vanity, a magic mirror, a poisoned apple and a cottage full of diminutive miners are among the classic elements plucked from the Grimm Brothers’ fairy tale. Our critic called it “sheer fantasy, delightful, gay and altogether captivating.”

The 50 best things to watch on Disney+ right now.

‘I Savor Everything’: A Soprano’s Star Turn at the Met Opera

A Dollhouse You Could Call Home

Broadway Meets the Avant-Garde in a Juilliard Music Festival

Jon Bernthal’s Guide to Making It as a Supporting Actor

Aoife O’Donovan’s Songs Poured Out When Touring Shut Down