TOKYO — Yoshiaki Yamanishi set out to create the most boring toy imaginable.

In the booming universe of Japanese capsule vending machines, the competition is strong. Anyone with some pocket change could have been rewarded in recent months with a miniature toy gas meter that doubles as a step counter, a bar code scanner that emits a realistic beep or a doll-size plastic gasoline can with a functioning nozzle.

But when Mr. Yamanishi landed upon the idea of making a series of ultrarealistic split-unit air-conditioners late last year, he was confident he had a hit. Aficionados across Japan rushed to snatch up the tiny machines, complete with air ducts and spinning fans, just like the colorless rectangular units mounted outside buildings the world over.

To the list of unlikely winners of the pandemic add Japan’s hundreds of thousands of capsule vending machines. Called gachapon — onomatopoeia that captures the sound of the little plastic bubbles as they tumble through the machines’ works and land with a comic book thump — they dispense toys at random with the turn of a dial. Hundreds of new products are introduced each month, and videos of gachapon shopping sprees rack up millions of views. 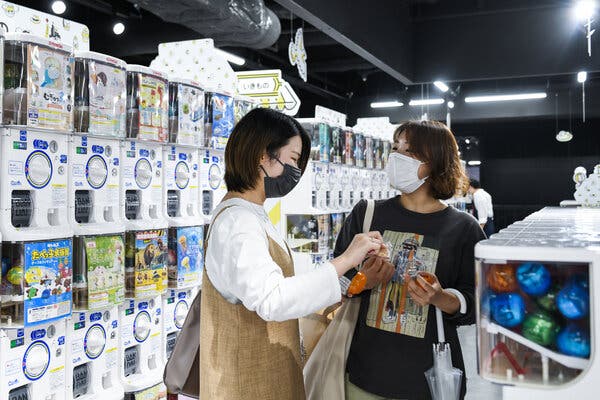 A new store in Tokyo, with more than 3,000 “gachapon” vending machines, is the largest of its kind in the world.Credit…Noriko Hayashi for The New York Times

The toys, also known as gachapon, have traditionally been aimed at children (think cartoon and video game characters). But their exploding popularity has been accompanied, or perhaps driven, by a surge in what the industry calls “original” goods geared toward adults — everything from wearable bonnets for cats to replicas of everyday objects, the more mundane the better.

Isolated in their plastic spheres, the tiny reproductions feel like a metaphor for Covid-era life. On social media, users — as gachapon designers insist on calling their customers — arrange their purchases in wistful tableaus of life outside the bubble, Zen rock gardens for the 21st century. Some have faithfully recreated drab offices, outfitted with whiteboards and paper shredders, others business hotel rooms complete with a pants press.

For Mr. Yamanishi, whose company, Toys Cabin, is based in Shizuoka, not far from Tokyo, success is “not about whether it sells or not.”

“You want people to ask themselves, ‘Who in the world would buy this?’” he said.

It’s a rhetorical question, but in recent years, the answer is young women. They make up more than 70 percent of the market, and have been especially active in promoting the toys on social media, said Katsuhiko Onoo, head of the Japan Gachagacha Association. (Gachagacha is an alternative term for the toys.)

That enthusiasm has helped double the market for the toys over the last decade, with annual sales reaching nearly $360 million at more than 600,000 gachapon machines by 2019, the most recent year for which data is available. Industry watchers say that interest has continued to surge during the pandemic.

“You want people to ask themselves, ‘Who in the world would buy this?’” said Yoshiaki Yamanishi, managing director of Toys Cabin.Credit…Noriko Hayashi for The New York Times

The products are not particularly profitable for most makers, but they offer designers a creative outlet and find a ready customer base in a country that has always had a taste for whimsy, said Hiroaki Omatsu, who writes a weekly column about the toys for a website run by the Asahi Shimbun, a Japanese newspaper.

“Creating gachapon for adults is all about devoting yourself to making something that’s worthless,” he said. “‘This is ridiculous’ is the highest form of praise.”

Gachapon machines trace their roots to the United States around the turn of the 20th century, when the contraptions dispensed candy, peanuts and trinkets. Japan supplied many of the cheap toys that filled them, but it wasn’t until the 1960s that the devices hit the country’s shores.

In the late 1970s, the machines had their breakout moment when Bandai — now one of the world’s largest toy companies — sparked a national craze with a series of collectible rubber erasers based on “Kinnikuman,” a popular comic book about professional wrestlers.

Gachapon have since become a fixture of Japan’s pop culture, a symbol of the fun-loving side of the country that dreamed up Hello Kitty and Pokémon.

Ikebukuro — a bustling hub of Japanese urbanity and pop culture in central Tokyo — has become the unofficial center of gachapon culture, with the machines spilling out of seemingly every storefront. Sunshine City, a shopping mall and theme park, features two gachapon “department stores.” The second, opened by Bandai in February, has been certified by Guinness World Records as the world’s largest, with more than 3,000 machines.

Fuchiko, dressed like a Japanese office worker, set off a frenzy when Kitan Club introduced the toy in 2012.Credit…Noriko Hayashi for The New York Times

Selling gachapon is not too different from buying them: It’s a lottery. Predicting what people will like is nearly impossible. And that gives designers license to make any toy that strikes their fancy.

Novelty is a key competition metric for the industry. The pleasure of gachapon comes not so much from the toys themselves — they have a brief half-life — but the fun of buying them: the joy of encountering each month’s unexpected new products, the slot-machine thrill of not knowing what you’re going to get.

To keep customers coming back for more, even the smallest companies put out as many as a dozen new toys each month, sending distributors stacks of paper describing new products on offer for their growing networks of gachapon machines.

The Tokyo toy company Kenelephant has made a niche for itself with detailed reproductions of products taken from the middle strata of Japanese consumer brands — objects that are more familiar than desirable.

Displayed on walls of white gallery shelving around the company’s office, the tiny replicas of Yoshinoya beef bowls and Ziploc plastic containers are positioned as a kind of pop art. Its stores, found in Tokyo’s busy train stations, are decorated like high-end coffee shops with brushed steel, concrete and a monochrome, industrial palette.

Kenelephant initially selected products aimed at professionals and hobbyists, said one of the company’s directors, Yuji Aoyama, but it quickly moved on to objects with broader appeal.

Nearly a decade later, the company receives emails every day from companies eager to have their products miniaturized.

Mondo Furuya, the chief executive, in Kitan Club’s office, which is designed to look like a Japanese schoolhouse.Credit…Noriko Hayashi for The New York Times

The seeds for the current gachapon boom were planted in 2012 when the toymaker Kitan Club set off a frenzy with Fuchiko, a tiny woman dressed in the austere and slightly retro uniform of a female Japanese office worker — known as an O.L., or office lady — who could be perched on the edge of a glass.

Popular toys used to sell over a million units. Now, with competition so intense, anything over 100,000 is a bona fide hit.

The new producers “seem to have been under the mistaken impression that we made a lot of money,” Mr. Furuya said during an interview at the company’s headquarters in central Tokyo, where employees gather once a month to brainstorm ideas.

The office is a shrine to whimsy, designed to look like a Japanese schoolhouse and stuffed with toys and artifacts seemingly plundered from a pirate’s cave. The entry hall is lined with the company’s gachapon collections, including a pile of lumpy, discolored allergens — mostly different kinds of pollen. The line, a spokeswoman said, was a flop.

The company’s perfectionism meant it lost money on its early products — Fuchiko’s elbow pits are hand painted, a detail most people would never notice — but over the years, it has learned to keep costs down without sacrificing quality. Still, the toys remain a labor of love: Kitan Club relies on revenue from other products — high-end licensed toys aimed at adult collectors — to subsidize its capsule business.

Keita Nishimura, the chief executive of another gachapon maker, Toys Spirits, describes the process of designing the toys as half art, half engineering challenge. It’s a three-dimensional haiku defined by price (cheap enough to be sold profitably for a few coins) and size (the capsules are generally about two inches wide).

At Toys Spirits, the focus is on usable items. Recent hits have included a water cooler that dispenses ant-size droplets and a shaved ice machine that makes real shaved ice — syrup not included. In search of maximum authenticity, Mr. Nishimura had both toys certified kitchen-safe by Japan’s food safety regulator.

The challenge of making gachapon lured Keita Nishimura from a leading toymaker to Toys Spirits, where he is chief executive.Credit…Noriko Hayashi for The New York Times

Making big things is easy, but making small things is tough, he said. Three years ago, he left his job making high-end toys at a leading company to pursue the challenge.

Although Mr. Nishimura dresses like a Japanese salaryman, when he describes his work he sounds like Willy Wonka — each empty capsule is a world of pure imagination.

“I put a lot of effort into making each one,” he said. “I just keep trying to squeeze something wonderful in there, something that makes you dream.” 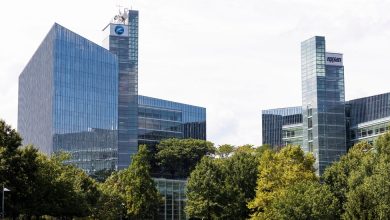 Gannett Starts Another Round of Staff Cuts