It’s just 60 miles from El Dorado Dairy in Ontario, Calif., to the nation’s largest container port in Los Angeles. But the farm is having little luck getting its products onto a ship headed for the foreign markets that are crucial to its business.

The farm is part of one of the nation’s largest cooperatives, California Dairies Inc., which manufactures milk powder for factories in Southeast Asia and Mexico that use it to make candy, baby formula and other foods. The company typically ships 50 million pounds of its milk powder and butter out of ports each month. But roughly 60 percent of the company’s bookings on outbound vessels have been canceled or deferred in recent months, resulting in about $45 million in missed revenue per month.

“This is not just a problem, it’s not just an inconvenience, it’s catastrophic,” said Brad Anderson, the chief executive of California Dairies.

A supply chain crisis for imports has grabbed national headlines and attracted the attention of the Biden administration, as shoppers fret about securing gifts in time for the holidays and as strong consumer demand for couches, electronics, toys and clothing pushes inflation to its highest level in three decades.

Yet another crisis is also unfolding for American farm exports.

The same congestion at U.S. ports and shortage of truck drivers that has brought the flow of some goods to a halt has also left farmers struggling to get their cargo abroad and fulfill contracts before food supplies go bad. Ships now take weeks, rather than days, to unload at the ports, and backed-up shippers are so desperate to return to Asia to pick up more goods that they often leave the United States with empty containers rather than wait for American farmers to fill them up.

The National Milk Producers Federation estimates that shipping disruptions have cost the U.S. dairy industry nearly $1 billion in the first half of the year in terms of higher shipping and inventory costs, lost export volume and price deterioration.

“Exports are a huge issue for the U.S. right now,” said Jason Parker, the head of global trucking and intermodal at Flexport, a logistics company. “Getting exports out of the country is actually harder than getting imports into the country.”

Agriculture accounts for about one-tenth of America’s goods exports, and roughly 20 percent of what U.S. farmers and ranchers produce is sent abroad. The industry depends on an intricate choreography of refrigerated trucks, railcars, cargo ships and warehouses that move fresh products around the globe, often seamlessly and unnoticed.

U.S. farm exports have risen strongly this year, as the industry bounces back from the pandemic and benefits from a trade deal with China that required purchases of American agricultural products. Strong global demand for food and soaring commodities prices have lifted the value of U.S. agricultural exports more than 20 percent over last year.

Still, exporters say they are leaving significant amounts of money on the table as a result of supply chain problems. And many farmers are now struggling to keep up with soaring costs for materials like fertilizer, air filters, pallets and packaging, as well as find farmhands and drivers to move their goods.

A survey by the Agriculture Transportation Coalition, which represents exporters, found that 22 percent of foreign agriculture sales on average were being lost as a result of transportation challenges.

Delays at ports have particularly hurt products that move in corrugated metal containers, like cheese, butter, meat, walnuts and cotton.

One company, Talmera USA Inc., which exports milk powder, cheese and dairy ingredients like lactose, had a shipment delayed so many times that its load finally wound up on the original vessel it was assigned to after the ship had left the port in Seattle, circumnavigated Asia and returned weeks later.

Mr. Anderson said that his company’s customers were beginning to look to suppliers in Europe, New Zealand and other countries for their purchases, even though the U.S. dairy industry has a reputation for high quality. “Frankly none of that matters to the customer if we can’t get it there,” he said.

Part of the problem is that shipping companies are able to charge far more to ferry goods from Asia to the United States than vice versa, so they don’t want to waste time waiting for a less lucrative load departing from the West Coast.

According to data from Freightos, an online freight marketplace, the cost to ship a 40-foot container from Asia to the U.S. West Coast soared to $18,730 in November — more than 17 times what it cost to make the reverse trip.

As a result, more than 80 percent of the 434,000 20-foot containers exported out of the Port of Los Angeles in September were empty — up from about two-thirds in September 2020 and September 2019.

Mario Cordero, the executive director of the Port of Long Beach, said that the price differential encouraged shipping companies to get their containers “back to Asia A.S.A.P. so you can load it with import items.”

“And unfortunately the American exporter is impacted by this approach,” he said. 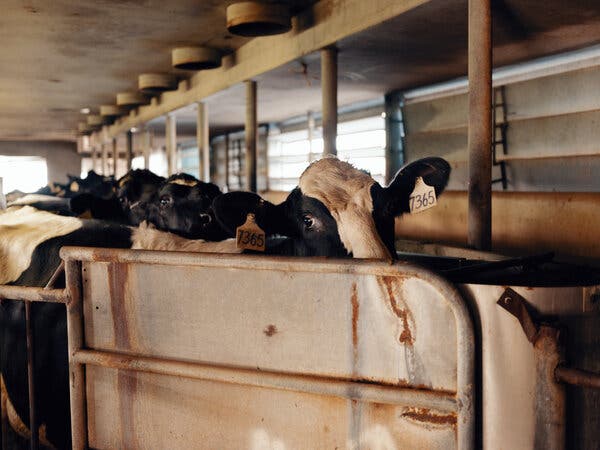 In recent months, up to 60 percent of the company’s bookings on outbound vessels have been canceled.Credit…Adam Perez for The New York Times

A supply crunch in the trucking industry is also affecting farmers, as truckers find better pay and hours delivering holiday gifts than hauling soybeans and swine.

Tony Clayton, the president of Clayton Agri-Marketing Inc., in Jefferson City, Mo, exports live animals around the world for breeding. He said the company is competing at both ports and airports for space for dairy heifers, swine and goats. And many livestock truckers have found that they can earn more hauling dry freight.

“It is a challenge,” Mr. Clayton said. “We’re all fighting and competing for those people who will sit behind the steering wheel.”

The infrastructure bill that Congress passed on Nov. 5 aims to remedy supply chain backlogs by investing $17 billion in American ports, many of which rank among the least efficient in the world.

The bill also includes funding to improve railways, roads and waterways, as well as a provision to fund pop-up container yards outside the Port of Savannah, in Georgia, to ease congestion. It will also lower the minimum age of truckers who can cross state lines to 18, in a bid to attract more workers to a profession that has become a key bottleneck in supply chains.

In September, the U.S. Department of Agriculture also announced it would dispense $500 million to help farmers deal with transportation challenges and rising materials costs.

John D. Porcari, the Biden administration’s port envoy, said farm exports are a “primary focus” for the administration, and that the White House was trying to encourage private sector companies, including ocean carriers, to get the supply chain moving.

The White House held a round table with agricultural exporters on Friday, and Mr. Porcari plans to visit the Port of Oakland, in California, one of the biggest export points for agriculture, this week.

“We know that some sectors have had more trouble than others, and we’re working to eliminate those bottlenecks,” Mr. Porcari said in an interview.

Mr. Anderson — whose company is responsible for nearly 10 percent of America’s milk supply and a fifth of American butter production — said he had been frustrated that much of the public dialogue from the government and in the media had focused more on consumer imports.

“Are we going to get toys for Christmas? Are we going to get chips for automobiles? We think those are real concerns and they need to be talked about,” he said. “What’s not being talked about is the long-term damage being done to exporters in the world market and how that’s going to be devastating to our family farms.”

Agricultural exporters have had to get creative to bypass congested ports and warehouses. Mr. Anderson said his company was considering rerouting some shipments more than a thousand miles to the port in Vancouver.

Mike Durkin, the chief executive of Leprino Foods Company, the world’s largest maker of mozzarella cheese, told House lawmakers this month that nearly all of the company’s 2021 ocean shipments had been canceled and rebooked for a later date. More than 100 of the company’s bookings this year had been canceled and rebooked 17 times, Mr. Durkin said, equating to a five-month delay in delivering their cheese.

In the interim, Leprino Foods has had to pay to hold its cheese in refrigerated containers in carrier yards, racking up an additional $25 million in fees this year.