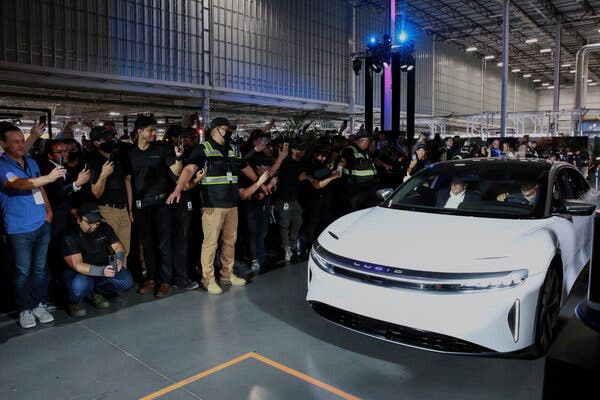 President Biden visited a General Motors factory in Detroit yesterday that will start producing electric cars next year. He gave a speech to highlight how his recently signed $1.1 trillion infrastructure bill will accelerate America’s transition to electric vehicles, or E.V.s.

The stocks of E.V. companies have already risen to shockingly high levels. And some have yet to make any cars, let alone profits. The push by policymakers to encourage E.V. sales has helped the sector, as has climate consciousness among some car buyers. But the mania also reflects the general bullishness that has swept up many assets, which can be hard to link to traditional financial fundamentals.

The run up in share prices illustrates investors’ enthusiasm, The Times’s Niraj Chokshi and Jack Ewing report. Take Lucid Motors, which started delivering sedans in a 520-car limited edition last month and plans to make 20,000 vehicles next year. Lucid’s shares, which have more than doubled in the past month, give the company a market value of nearly $90 billion, or $10 billion more than Ford, which sold nearly 4.2 million cars last year. Rivian, an electric pickup maker that has yet to start selling vehicles, went public last week and is now worth $127 billion, or more than G.M. And then there is Tesla, of course, worth over $1 trillion, or as much as nearly every major carmaker combined.

Wall Street appears eager to go along for the ride. In a report to clients this week, Morgan Stanley’s lead auto analyst, Adam Jonas, said Lucid could be worth as much as $100 billion. Here’s what it would have to do to get there:

Jonas, for the record, said this wasn’t likely. “We believe the market is pricing in extraordinarily high probabilities of success,” he wrote, referring to Lucid’s valuation.

Dan Ives, a tech analyst at Wedbush Securities who follows the electric car industry, said Lucid could be worth as much as $150 billion. How does he get there?

Aswath Damodaran, a New York University professor who is considered an authority on valuing companies, isn’t so sure about all of this. “Let’s be quite honest,” Damodaran told DealBook. “Wall Street analysts are not valuing Rivian or Lucid. They are chasing the price, and finding ways to rationalize it.”

Activision Blizzard’s C.E.O. faces more pressure. The head of Sony’s PlayStation group asked the video game developer to explain a Wall Street Journal article about how its chief, Bobby Kotick, reportedly downplayed sexual harassment and assault claims against employees. The company’s stock has fallen 9 percent since the report was published.

Alibaba misses expectations on the top and bottom line. The Chinese ecommerce giant reported a 38 percent drop in third-quarter profit and lower sales growth than analysts expected, as it faces a crackdown on tech companies by Beijing and a slowing economy. Its shares were down 4 percent in premarket trading.

Deere employees end a five-week strike. About 10,000 workers who had gone on strike over pay ratified a new six-year contract that improves terms over a previous offer. It’s the latest instance of workers flexing their negotiating muscle amid a labor shortage.

Biden’s pick as a top financial regulator faces tough scrutiny. At her nomination hearing today, Saule Omarova, the White House’s choice to lead the Office of the Comptroller of the Currency, will face questions from a Senate committee about her commitment to capitalism, positions she took as an academic and a 1995 arrest on a misdemeanor charge.

Apple backtracks on DIY iPhone and Mac fixes. The company will sell parts and instruction manuals to consumers starting early next year, in a victory for the “right to repair” movement. Regulators have put pressure on tech giants to let customers more easily repair their own devices, instead of pushing them to buy new ones after a malfunction.

At the event to promote the future of electric vehicles yesterday (see above), President Biden also acknowledged a more immediate concern: the pain that Americans feel from higher prices at the pump. He proposed to address it via antitrust policy, by looking at the market power of big oil companies.

Biden asked the F.T.C. to investigate “anti-consumer behavior” by oil giants, arguing that “gasoline prices at the pump remain high, even though oil and gas companies’ costs are declining.” The two biggest U.S. producers, Exxon Mobil and Chevron, are set to double their net income while embarking on billions of dollars’ worth of stock buybacks and dividend payouts.

The move is a warning shot. The F.T.C., under the leadership of the trustbuster Lina Khan, likely won’t take action anytime soon, and Biden’s announcement probably won’t push down prices in the short term. But it could prompt the agency to investigate how oil companies set prices, providing evidence for future regulatory actions. And it’s the latest sign that the Biden administration is willing to use antitrust enforcement more aggressively to rein in the power of big businesses across the economy.

“The past is the past, and the country is now in a contest to define the future.”

— Rupert Murdoch at News Corp.’s annual shareholder meeting, in which he said that conservatives should play an “active, forceful role” in debates about education, welfare and economics. “That will not happen if President Trump stays focused on the past,” he said, alluding to Trump’s sway over the Republican Party and his preoccupation with the 2020 election.

Oprah Winfrey, Reese Witherspoon and the Bumble founder Whitney Wolfe Herd are joining Blackstone by investing in Spanx, DealBook hears. Blackstone is closing its deal to acquire the shapewear brand for $1.2 billion today.

It all began with Oprah. Founded more than 20 years ago, Spanx has become synonymous with the product it sells. Winfrey helped put the brand on the map in its early days when in 2000 she named Spanx her favorite product of the year. (Sara Blakely, Spanx’s founder, said that Winfrey had earlier validated her business idea when the talk show host told the audience one day that she cut the feet off her pantyhose.)

It’s the latest investment deal for Winfrey and Witherspoon, whose financial backing is valued as a stamp of approval for consumer brands. The TV and film stars are also familiar partners for Blackstone. Winfrey invested alongside Blackstone in Oatly, the oat milk brand that went public earlier this year. Blackstone also recently acquired Witherspoon’s Hello Sunshine production studio, adding her to the board of its parent media company. Wolfe Herd’s Bumble, a dating app, was acquired by Blackstone in 2019 before going public earlier this year.

Senator Elizabeth Warren sent a letter to the S.E.C. chair, Gary Gensler, yesterday asking whether he is looking into the recent deal between former President Donald Trump’s media company and a special purpose acquisition company, DealBook is first to report. Among the Massachusetts Democrat’s concerns are issues uncovered by a recent Times investigation, which found that the deal may have skirted securities laws and stock exchange rules, specifically the prohibition against blank-check firms going public with a merger target already arranged.

To recap: Digital World Acquisition, the SPAC, announced a deal with Trump Media and Technology Group within weeks of going public, an unusually short period of time, and it did not disclose that Patrick Orlando, who leads the SPAC, previously held talks to acquire Trump Media with a different SPAC. Some securities lawyers said those earlier talks should have been disclosed, while bankers said that if serial SPAC sponsors, like Orlando, have conversations with a merger target on behalf of one SPAC, it does not preclude them from buying that company with a different SPAC. There is still relatively little known about Digital World and Trump Media, and the SPAC didn’t file a quarterly report by a Nov. 15 deadline, saying it needed “additional time to gather necessary information.”

Warren’s letter adds more scrutiny to the deal — and SPACs in general. The Trump Media merger was already likely to attract regulatory attention, given the former president’s involvement and the trading frenzy it generated. (The SPAC’s shares are up nearly 500 percent since the deal was announced.) “I have been concerned for some time about the misaligned incentives underlying SPAC deals, which are often structured to exploit retail investors to the benefit of large institutional investors,” Warren wrote. The S.E.C. under Gensler has made regulating SPACs a priority and Congress also has stricter rules in its sights.

A Resilient Team for a Broken Nation