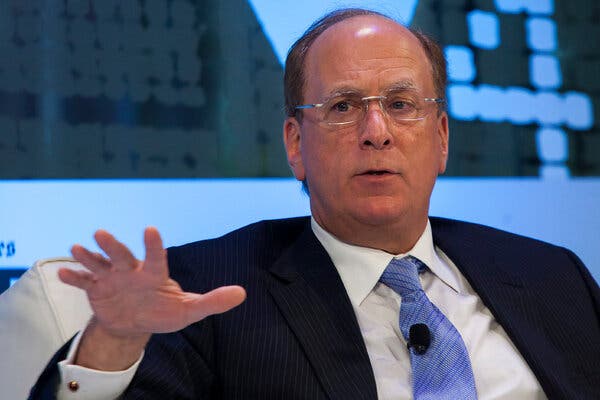 Stakeholder capitalism isn’t “woke,” according to Larry Fink of BlackRock.Credit…Michael Nagle for The New York Times

As the founder and C.E.O. of BlackRock, Larry Fink commands the attention of business leaders, thanks to the $10 trillion that his investment firm manages. After years of pushing corporate America to look beyond profits and embrace a broader social purpose — which has attracted criticism from all corners — he is using his latest annual letter to C.E.O.s to clarify, and defend, his approach.

Stakeholder capitalism “is not woke,’” Fink wrote in the 3,300-word letter. “It is capitalism.” It was a rebuke to those who say that BlackRock’s new focus on environmental, social and corporate governance concerns, known as E.S.G., is either bowing to anti-business interests or merely marketing. Reducing a company’s carbon footprint, for instance, ensures long-term viability, something investors and executives should care about, he wrote.

He again stressed that E.S.G. was crucial for BlackRock, after writing in 2020 that climate change would be a “defining factor” in its investment assessments. Failing key E.S.G. tests could lead BlackRock to sell its holdings in a company: “Access to capital is not a right,” Fink wrote.

He also rebutted criticism that BlackRock isn’t doing enough. Environmental groups have argued that the firm should divest its holdings in fossil-fuel producers, but he asserted that this alone wouldn’t get the world to net zero, and urged governments to step up their efforts. “Businesses can’t do this alone,” Fink wrote, “and they cannot be the climate police.”

One thing Fink didn’t address is pushback from the political right. Texas, for instance, passed a bill last year that would block the state’s agencies from doing business with financial firms, like BlackRock, if they were to “boycott energy companies.” (To date, Texas hasn’t cut off BlackRock.) Fink said BlackRock would give individual investors the ability to vote their shares on corporate matters, something Republican lawmakers and others have urged, arguing that the firm has too much influence.

Tech stocks slump as oil prices and bond yields rise. Sharp moves in early trading suggest it could be an eventful day in the markets. The shift away from tech stocks continues, with Nasdaq futures falling as much as 2 percent, amid expectations that central banks will soon raise rates to fight inflation. To that end, the price of oil hit a seven-year high.

China’s economy continues to slow. The country’s G.D.P. rose just 4 percent in the fourth quarter, held back by the pandemic and tighter regulations. Though China’s central bank lowered interest rates to spur the economy, the country faces a long-term problem: an aging population.

Credit Suisse tries to move on after replacing its chairman. António Horta-Osório resigned after the Swiss bank’s board investigated his breaches of quarantine rules and use of corporate jets. It’s the latest challenge for Credit Suisse, which has struggled to move past scandals like the collapses of Archegos and Greensill Capital.

U.S. antitrust regulators are announcing something today. It’s unclear what the news conference is about, but observers speculated that it may involve revamped guidelines for mergers. That would be the next step in the Biden administration’s effort to step up antitrust enforcement.

Electric vehicle sales in Europe outpace diesels. More than 20 percent of all cars sold in Europe and Britain last month were electric, as diesel — once the most popular engine option there — declines in popularity. The best-selling brand of electric car was Tesla, which is opening a factory in Germany this year.

The first big takeover battle of the year

Unilever yesterday pressed the case for buying the consumer health joint venture owned by GlaxoSmithKline and Pfizer, despite being rejected three times. A deal for the maker of Advil and ChapStick, most likely worth more than 50 billion British pounds ($68 billion), would probably be one of the biggest takeovers of 2022 — but it faces plenty of skepticism.

The fate of the joint venture has been up in the air for months. Glaxo, which owns about 68 percent of the business, said it planned to spin off the venture into a separate public company so that it can focus on higher-margin pharmaceuticals. But it has faced pressure from investors like Elliott Management to explore a sale, in hopes of collecting more. (Glaxo said Unilever’s bids “fundamentally” undervalued the business.)

Will others join the fray? Other consumer goods companies, like Procter & Gamble, have been mentioned as potential suitors for the venture. The prospect of a bidding war helped push shares in Glaxo up nearly 5 percent yesterday.

Unilever investors appear unenthusiastic. Shares in the company fell close to 6 percent after Unilever said it remained interested in a takeover, talking up the merits of expanding in consumer health. (One broker’s note about the potential deal was titled, “Please Don’t.”) That could ultimately limit Unilever’s ability to strike a deal.

“Airplane manufacturers have informed us that there are huge swaths of the operating fleet that may need to be indefinitely grounded.”

— Letter from a group of airline chief executives to federal officials, warning of chaos if a deployment of 5G mobile technology goes ahead this week. The F.A.A. and telecom companies reached a deal to roll out the technology, which airlines say can interfere with aircraft instruments, if the power of 5G transmitters was reduced near airports.

Whom do you trust?

Despite the repeated, public and sometimes catastrophic failings of big businesses in recent years, the general public still appears to have more faith in corporations than in governments or the news media. That’s according to the latest edition of a long-running survey by the public relations firm Edelman, which surveyed more than 36,000 people in 28 countries. The report, released today, painted a dispiriting picture for institutionalists of all stripes:

When Pattie Sellers helped start Fortune’s list of the world’s most powerful women more than two decades ago, it served as a showcase of women at the top of their fields. Now, Sellers and Nina Easton, who helped grow the franchise, are starting an initiative to ensure that there are more women who rise.

Today, Sellers and Easton are announcing Journey, a nonprofit group aimed at addressing the “pyramid effect,” in which the share of women shrinks as they rise up the corporate ranks.

The new group connects 25 fellows with 25 champions, which include some of the country’s most influential executives such as Mary Barra of G.M., Mellody Hobson of Ariel Investments and Dina Powell McCormick of Goldman Sachs. “Because of who they are and their own journeys to the top,” Sellers said, “they know how to address the problem because they’ve lived it.”

“It’s about building bonds,” Easton said. Journey will select 25 fellows each year, kicking off the program with a retreat, followed by monthly gatherings of fellows and mentors. Journey is seeking women across the private sector, with a focus on minorities or those facing challenges, socioeconomic or otherwise. “We’re looking to help them get beyond the barriers,” said Beverly Kirk, Journey’s executive director. The group hopes that fellows will develop long-lasting relationships with a variety of mentors that will help guide their careers.

Women hold less than 10 percent of Fortune 500 C.E.O. spots. Journey wants to expand that number, along with women in power generally. “That’s really what I think will be the judge of if it’s successful,” said Ginni Rometty, the former C.E.O. of IBM. “If we can accelerate their timelines to be in real positions of influence.”

Millions of women have left the work force since the start of the pandemic. Journey’s intentionally small fellowship class is intended to allow for open discussion about personal and professional challenges. “We began to think about how these conversations need to be much more intimate, so that we could drill down and have very candid conversations,” said Rosalind Brewer, the C.E.O. of Walgreens. Exploring “how we change this trajectory” is important, she said, “because it doesn’t look good.”

Relationships developed via the program are intended to open doors. Companies founded solely by women in the U.S. raised only 2 percent of total venture funding last year, according to PitchBook.“Until there is more diversity at the top, you’re going to have less money going to female founders and certainly to diverse female founders,” said Susan Lyne, a co-founder of BBG Ventures. “For people to give you an opportunity where they have to take some risk,” said Amy Chang, who sits on the boards of Disney and P&G, “they need to have heard about what you can do, and they need to trust that they should take this risk on you.”