Hindsight is a series from the Headway team looking back at predictions and promises from the past.

Robert C. Seamans, the man President Gerald Ford had entrusted to deal with the energy crisis of the 1970s, didn’t think wind power had much of a future. In 1975, at the dedication of an experimental turbine in Ohio, Seamans opined that wind would never account for more than 1 percent of the U.S. energy supply.

Solar power, on the other hand, was one of Seamans’ great hopes for energy independence. It had been two long years since the OPEC oil embargo, and gas prices were still high. Six months into his term as president, Ford formed Seamans’ agency — the Energy Research and Development Administration — to galvanize homegrown fuel industries and end reliance on foreign oil.

The same year that Seamans scoffed at wind energy, his agency issued a report asserting that the sun’s “virtually inexhaustible potential supply of energy” could represent a quarter of the nation’s energy use by 2020.

Nearly 50 years later, wind and solar farms have sprouted across the country — but solar power accounted for less than 3 percent of American electricity last year, while wind made up around 8 percent. President Biden is aiming to run the U.S. energy grid entirely on clean energy within 15 years, and he has set a goal of cutting the cost of solar energy by 60 percent over the next decade. To hit these targets, policymakers might do well to explore why Seamans’ predictions were essentially upside down. 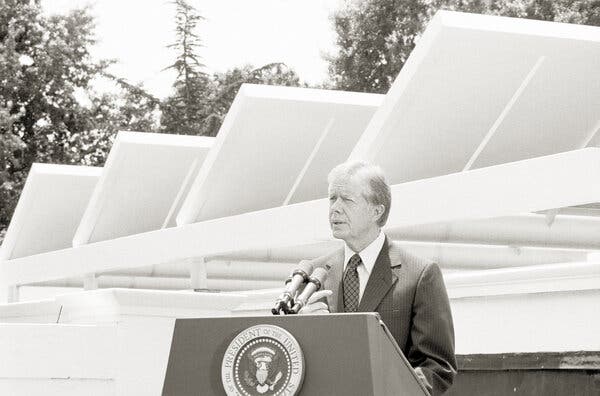 President Jimmy Carter, who had solar panels installed on the White House roof, invested in research on solar technology in the 1970s. President Ronald Reagan reversed many of his initiatives.Credit…Bettmann, via Getty Images

How did wind eclipse the sun?

Jay Hakes, who was an adviser to President Jimmy Carter and the head of the Energy Information Administration at the Department of Energy from 1993 to 2000, has spent a lot of time examining why the optimistic forecasts about solar power didn’t pan out. He concluded that the answer was complicated, but a big part of it was about inconsistent government support.

New technology can require decades to pay off, so “early research and development is often done by the government or not at all,” Mr. Hakes said. When Mr. Carter took office in 1977, he established the Department of Energy and doubled down on energy independence. Mr. Carter declined to fund major federal purchases of solar panels, saying in 1978 that it was “still too early to concentrate on commercialization of photovoltaics.” But he did dedicate millions for research on new solar technology. In a symbolic show of support , solar panels were mounted on the roof of the White House a year later.

But Mr. Carter’s successor did not endorse these efforts. In the 1980s, President Ronald Reagan cut Mr. Carter’s renewable energy research budget by 85 percent. “The Reagan administration fired most of the scientists working on solar energy,” Mr. Hakes said. In 1986, the White House’s solar panels were removed to fix the roof; Reagan decided not to put them back. Reagan chose instead to subsidize the nuclear industry, shifting funding from alternative sources of energy into the nuclear weapons program and streamlining regulations for commercial power plants.

As the United States dialed back support, countries like Germany and Japan forged ahead with solar power. In the 1990s, Germany invested billions in renewable energy research and passed a national law requiring utility companies to buy renewable energy at a fixed rate, which increased demand.

“The whole world benefited from its investments in solar cell technology,” said Samantha Gross, director of the energy security and climate initiative at Brookings Institution, a think tank based in Washington, D.C.

In the late 1990s, Japan also provided significant government subsidies for residential solar panels and it pioneered the use of semiconductors, material that helps conduct electricity, to manufacture photovoltaic cells, the individual units that make up the solar panels.

Policymaking at the federal and state level incentivized the production of wind energy in the United States in the 1990s and helped make wind power less costly.Credit…Tamir Kalifa for The New York Times

Which way does the wind blow?

In the late 1990s, the Clinton administration announced a modest wind push. Emphasizing the benefits to rural areas, it authorized federal agencies to spend more on energy from renewable sources. Clinton’s energy secretary, Bill Richardson, pledged that by 2020, 5 percent of the country’s electricity would be provided by wind power.

In a boon to both technologies, individual states began enacting policies called renewable portfolio standards, which, as Germany had done, required some electricity to come from renewable sources. Relatively conservative states like Iowa and Texas “realized they were part of the wind belt” and became early adopters, Mr. Hakes said. With this guaranteed demand, wind installations boomed in the 2000s.

American solar energy also began to flourish, thanks in part to the efforts abroad to make solar technology better and cheaper. In the aughts, Chinese solar companies ramped up production, first to meet German demand, and then to build Chinese installations. In 2005, during the presidency of George W. Bush, the U.S. Congress passed a tax credit that made it cheaper for individuals to install rooftop solar panels on their homes. President Barack Obama extended those credits and pumped $90 billion into renewable energy. Altogether, over the last decade, increased global production has contributed to the plummeting of solar energy prices by 89 percent.

What’s in store. The Hindsight series looks at past efforts to improve our world to learn how society can best can achieve progress in the face of accelerating dangers. Here’s some key examples that can help us forge our path forward:

Clean water in Ethiopia. In 2015, an initiative to dig wells and install communal taps seemed to be a turning point for a country struggling to provide safe drinking water to its people. But villagers continued to get sick. What went wrong?

A pledge to cut poverty. In 2000, the United Nations vowed to reduce dramatically the number of people living in extreme poverty. They met the goal, but the pandemic and dire conditions in sub-Saharan Africa show how fragile these gains can be.

The battle against H.I.V. In 2001, U.N. estimates suggested 150 million people would be infected with H.I.V. by 2021. That fate did not come to pass, and AIDS has become a manageable chronic disease for many. Here’s how it happened.

East River Park. A plan to protect residents of Lower Manhattan after Hurricane Sandy, shows that even when money is at hand, convoluted systems make it difficult to find consensus and work at the speed and scale required.

The climate quandary. In 2009, the European Union promised to reduce carbon emissions by 20 percent from 1990 levels. It succeeded, but many experts question the accounting methodology.

Ms. Gross is among the many experts who are predicting that solar energy will continue to expand quickly and become more affordable, along with offshore wind power. “Solar cost is still dropping rapidly,” she said. The U.S. solar industry grew 43 percent in 2020, and the price for both wind and solar electricity are now less than that of coal.

Solar power didn’t begin to flourish in the United States until the 2000s, when legislation made it cheaper for Americans to install solar panels on their homes.Credit…Gabriella Angotti-Jones for The New York Times

A turbulent path ahead?

The American electrical grid is divided into three separate networks, making it impossible to send solar or wind energy from California to, say, Delaware or Alabama. And despite plummeting renewable costs, U.S. energy policies remain fragmented, with no federal renewable portfolio standards, which would require that a certain amount of electricity come from renewable energy.

This uneven policy has had repercussions: Mr. Hakes notes that both wind and solar “have hit significant bumps along the way due to inconsistent policy support.” The United States also lags behind other developed countries, like those in the European Union, in instituting a carbon price or making companies pay for the carbon emissions they produce. “If we price carbon,” Ms. Gross said, “you get out of the realm of subsidies, and at least the prices the consumers see are right.”

The Biden administration’s Build Back Better bill included $320 billion in tax reductions for producers and buyers of wind, solar and nuclear power. But now that the bill has hit a dead end in the Senate, the package hinges on the administration’s efforts to break it up. Mr. Hakes believes that had federal policies of similar scale been instituted earlier, solar prices might have become competitive with gas and coal at least a decade earlier.

“If you give smart people a financial incentive,” he said, “you’re going to see progress.”

Headway is an initiative from The New York Times exploring the world’s challenges through the lens of progress.

The Headway initiative is funded through grants from the Ford Foundation, the William and Flora Hewlett Foundation and the Stavros Niarchos Foundation (SNF), with Rockefeller Philanthropy Advisors serving as a fiscal sponsor. The Woodcock Foundation is a funder of Headway’s public square.

Funders have no control over the selection, focus of stories or the editing process and do not review stories before publication. The Times retains full editorial control of the Headway initiative.

Tags
Had Power President Solar That

A Birder Is Back in the Public Eye, Now on His Own Terms

Europe Rethinks Its Reliance on Burning Wood for Electricity

JetBlue goes hostile in its takeover bid for Spirit Airlines.