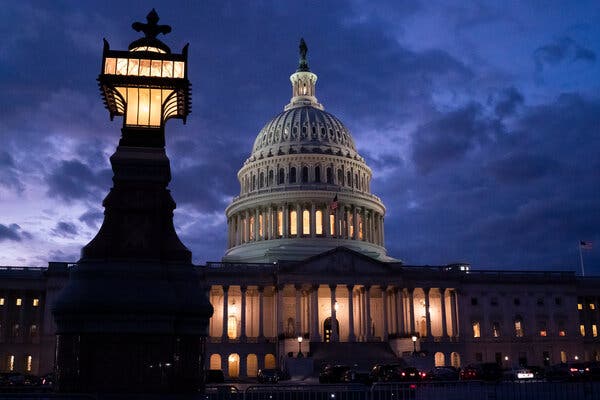 This year, Democrats were drawn to shares in technology companies, while Republicans favored the energy industry.Credit…J. Scott Applewhite/Associated Press

Lawmakers traded fewer company stocks this year compared with last, perhaps because of the increased scrutiny that the questionable practice brings. But they are still active buyers and sellers, courting controversy over potential conflicts of interest between their private financial dealings and public influence over rules and regulation. They are also dabbling more than ever in options and crypto, based on estimates provided in official disclosures, compiled by researchers at Capitol Trades for DealBook.

Politicians and their immediate families bought $267 million and sold $364 million worth of assets this year, both down on levels in 2020 despite rising markets. About 60 percent of these trades were in company stocks, with the rest split among funds, bonds and other assets. Republicans bought $100 million worth of stocks this year, versus $75 million for Democrats, according to the average of ranges that lawmakers provide in filings.

Democrats are really into tech stocks, which accounted for some $35 million, or nearly half of all purchases by the group (versus only 14 percent for Republicans). Microsoft was the most popular big-ticket buy: The husband of Representative Suzan DelBene of Washington is a former Microsoft executive who sold between $5 million and $25 million in the company’s stock in October, which she reported past the 45-day deadline, prompting criticism. House Speaker Nancy Pelosi’s husband is a real estate and venture capital investor who is active on the stock market, making a pair of million-dollar purchases of Microsoft stock during the year, among other trades.

Republicans are more about energy, buying $32 million worth of stock in companies in the sector during the year, about a third of all purchases (versus a mere 1 percent for Democrats). Representative Mark Green of Tennessee was associated with many of the biggest energy trades, spreading six-figure purchases across a range of firms.

Lawmakers embraced the latest trends. Mirroring a boom in options trading among individual investors that has worried regulators, congressional trades in stock options doubled in value this year, to about $26 million. More legislators and their families also got into crypto, with total purchases of about $300,000, versus $16,000 the year before. Green and his Republican House colleague Barry Moore of Alabama bought Dogecoin. (Republicans accounted for almost all of the crypto trades.)

All of this trading raises concerns about conflicts. This week, Pelosi rejected the idea of banning politicians and their families from trading stocks while in office. She was asked about it by a reporter from Insider, which recently published an investigation about lawmakers’ trades. And when The Times’s Ron Lieber asked lawmakers newly elected to Congress a few months ago if they would pledge not to trade individual stocks while in office, few were willing and most didn’t respond.

A sweeping opioid settlement is overturned. A federal judge said the painstakingly negotiated pact between Purdue Pharma, the maker of OxyContin, and state, local and tribal officials shouldn’t go forward because it releases the billionaire Sackler family — who own Purdue — from liability in civil cases. An appellate court will now likely weigh in.

The Senate votes to ban imports from Xinjiang. Lawmakers approved a bill that would ban goods made “in whole or in part” in the western Chinese region unless companies can prove that the products weren’t made with forced labor. Companies like Nike, Coca-Cola and Apple had lobbied to weaken the standard at the core of the bill.

A former insider alleges fraud in Donald Trump’s SPAC deal. The financier, Brian Shevland, said he was dropped as a nominee for the board of Digital World Acquisition Corp., which is taking the former president’s media venture public. In his lawsuit, Shevland asserts that he helped orchestrate the deal — and his claims may aid an investigation into whether the SPAC’s executives broke securities laws.

Investors are shocked by Rivian’s first earnings report. A month after its I.P.O., the electric vehicle maker announced plans to build a second factory. But markets seemingly focused on its growing losses — $1.2 billion in the third quarter alone — and an expected miss on its 2021 production targets. Rivian’s stock is down nearly 10 percent in premarket trading, after falling 5 percent yesterday.

A private equity giant finally moves to go public. TPG yesterday filed for an I.P.O., seeking to cash in on a bonanza for leveraged buyouts that has lifted shares in rivals like Apollo, Blackstone and KKR. TPG said its shares will be controlled by just three men: David Bonderman and Jim Coulter, its co-founders, and Jon Winkelried, its C.E.O.

Coronavirus cases are spiking across the country, and the world, at a pace that matches if not surpasses the worst periods during the pandemic. A second winter of Covid has produced a familiar sinking feeling among those who were growing more bold in their plans, which includes many businesses.

Employers are bowing to the Omicron reality. Wall Street giants like Citigroup told employees they could work from home, while Goldman Sachs postponed any remaining holiday parties. At least a dozen New York City restaurants and bars closed temporarily this week. And Broadway was hit by a raft of canceled shows, some at the last minute.

What about boosters? As many Americans rush to get additional shots, experts have begun to raise the possibility of vaccine mandates being revised to require booster shots to meet the definition of fully vaccinated. (Some companies, like The Washington Post, are doing just that.) The current wave also raises a bigger question: At what point do we reckon that this is the new normal, and how do we adapt to it?

“This is a matter of national security and financial stability.”

— Jay Clayton, the former S.E.C. chairman who is now an adviser and director to cryptocurrency companies, writing in The Wall Street Journal about why the U.S. should adopt blockchain and other crypto technologies in its financial system.

After two years of pandemic uncertainty, resolutions for 2022 may seem futile. Why make plans that will inevitably be disrupted? Whitney Johnson, the C.E.O. of the consultancy Disruption Advisors, says this is an opportunity — and next year will be “really exciting.” She spoke with DealBook about how to apply the science of learning to work and life, and discussed her coming book, “Smart Growth: How to Grow Your People to Grow Your Company.” The interview has been edited and condensed.

Where do we begin?

With reflection and rest. Growth is seasonal. Now, when the days are shortest and things lie a bit fallow, is a time for us to admit it’s been difficult and to feel hopeful. Let’s understand we are planting the seeds for tremendous growth.

What makes you so optimistic?

I think 2022 will be a really exciting time personally and professionally for many people. Growth happens on an S-curve, and we were all on different curves and stages when we got pushed off because of the pandemic. We are primed for post-traumatic growth. There is talk about “the great resignation” but I see “the great aspiration.”

If you know how growth works, you know where you are and where you want to go. Developing a vocabulary, individually and on teams, normalizes struggle, restlessness and sweet spots. Starting something new is scary, but a master might feel cranky and find the ennui confusing unless they know that learning, properly calibrated, is oxygen for the brain.

Is this just for work?

No. We can each approach growth methodically. I make ridiculously small goals so I will keep going. For example, I wanted to be a runner, so I started with five minutes every day and alternated between walking and running for 30 seconds. I added 10 seconds a day and could feel my brain and identity shifting. Now I am a runner and can do a 5K.

Tags
All New Pro That This

In Defense of Venture Capitalism