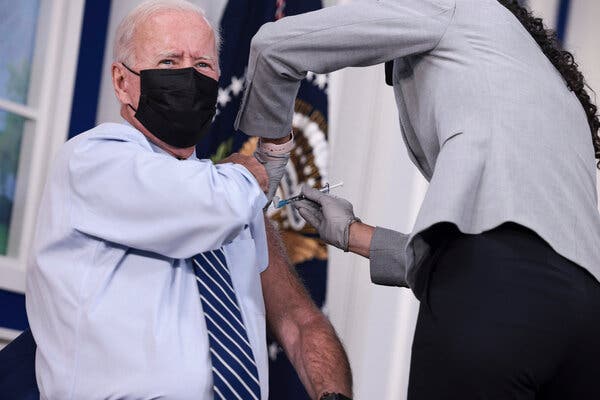 President Biden is headed to Chicago today, where he will make another push for companies to announce coronavirus vaccine mandates. He plans to meet with Scott Kirby of United Airlines and to visit a construction company considering a mandate, a White House official told DealBook. Throughout, the president will stress the message that vaccine mandates are crucial to the economic recovery. To bolster its case, the White House released a report this morning on the effects of corporate vaccine mandates to date.

In September, the president asked the Occupational Safety and Health Administration to write rules that would require companies with more than 100 employees to mandate vaccinations or weekly testing. While OSHA goes through the lengthy rule-making process, which could take several more weeks, the White House is urging companies to act now.

OSHA is working on standards that pass legal muster. That includes a number of rigorous, time-consuming steps, like demonstrating that workers face a grave danger at work and that a rule is necessary to address the danger. The agency is also working through the long list of questions that business groups have sent seeking guidance on the finer points of vaccine mandates. A few of the thorny issues:

The White House says early evidence shows that vaccine mandates work. United Airlines, which announced a mandate in August, recently reported that 99 percent of its workers had been vaccinated and that it had received 20,000 applications for about 2,000 flight attendant positions, a much higher ratio than before the pandemic. Tyson Foods reported a 91 percent vaccination rate ahead of a November deadline, compared with less than half before its mandate announcement in August. Those figures will probably be cited in efforts to address concerns among employers that mandates would cause workers to quit, particularly in industries facing labor shortages.

The White House argues that vaccine mandates are good for the economy. In its report, it cited a Goldman Sachs report estimating that the government order could lead to an increase in vaccinations that would encourage “many of the five million workers that have left the labor force since the start of the pandemic to return.” The administration also highlighted the economic burden that hospital stays for the unvaccinated put on the system.

The OSHA standards would give reluctant companies even more cover. Several big employers have imposed mandates since Biden’s announcement, including 3M and Procter & Gamble. Others, like JPMorgan Chase and Walmart, have yet to issue broad requirements. But even after OSHA finalizes its rules, some employers wary of mandates may not act, betting that they won’t be punished because of the agency’s limited enforcement resources or that the standards could get bogged down in court.

“Some companies are looking at it and saying, ‘Great that those employers had a good experience. I don’t know if we’ll have the same experience,’” Douglas Brayley, an employment lawyer at Ropes and Gray, told DealBook. “Or, they may look at it and say, ‘Great, they had a 91 percent vaccination rate, but we are so thinly staffed we couldn’t possibly lose 9 percent of our work force.’”

Democrats and Republicans approach a two-month debt limit extension. The short-term deal took shape after President Biden met with finance executives who said that the threat of a government debt default this month was already hurting the economic recovery. “The latest plan to stop the U.S. defaulting for no reason whatsoever is taken directly from the Greek default crisis handbook — kick the can down the road,” Paul Donovan of UBS wrote in a research note.

A data breach hits Twitch. An anonymous hacker published what appeared to be an enormous trove of data from the Amazon-owned video streaming service, including the history of Twitch’s source code, information about payouts to streamers and an unreleased online game store. Twitch confirmed that a breach had taken place.

The Facebook whistle-blower takes her case abroad. Frances Haugen, who testified at a Senate hearing on Tuesday, has also spoken with policymakers in Brussels, London and Paris about the need for more oversight of the social media giant. Facebook is slowing product upgrades amid the scrutiny, as well as limiting how much information is shared within the company.

Moderna plans to build a vaccine factory in Africa. The pharma firm said that it would invest $500 million in the plant, in a location not yet decided, where it will make up to 500 million doses a year of mRNA vaccines, including its coronavirus shot. Separately, Asian countries have joined the U.S. in making deals with Merck for supplies of the antiviral pill that the company says cuts risk of hospitalization and death from Covid.

General Motors announced an ambitious plan yesterday to more than double its revenue by 2030. The target is based on investments G.M. has made in electric vehicles and self-driving technology, as well as on its push into services, like auto insurance. It also reflects the grand ambition of Mary Barra, the C.E.O., to transform G.M. and defend its business from the tech companies that have been trying to outmaneuver it.

“Think about the vehicle not only as an electric vehicle, but as a software platform,” Barra said, sounding a lot more like Steve Jobs than the G.M. legend Alfred Sloan. To that end, the automakers’s plan includes:

By the numbers: Barra’s time at the top of G.M. has generally been seen as successful. She took over in 2013, steered the company through an ignition scandal, and nearly doubled profits in her first four years at the helm — though that growth came through cost controls, not increased revenue. The company’s stock has risen more than 30 percent this year, nearly double the gain in the S&P 500 but about half the rise in Ford’s shares over the same period.

G.M.’s sales last year were $122 billion, or about $30 billion lower than when Barra joined. The company’s new goal is to reach $280 billion of revenue in nine years. Wall Street analysts have projected that G.M.’s sales will rise to $175 billion by 2025, as compiled by the data service Sentieo. That path would leave the company about $50 billion short of its 2030 goal. And that goal is complicated by another company priority: G.M. said that it wanted to phase out sales of gas-powered vehicles, which comprise the bulk of its sales, by 2035.

“We have to make agriculture sexy.”

— Xavier Niel, the French tech billionaire who is the main backer of Hectar, a start-up based on a century-old farm west of Paris. The company is using algorithms and robots to try to make farming better for the environment and more attractive to younger workers.

The wrangling over spending bills and debt-ceiling dramas may be generating the biggest headlines in Washington, but the race to regulate the fast-growing cryptocurrency industry is also ramping up. Here’s a tour of some of the key developments this week:

Activist groups target crypto’s environmental impact. Today, more than 70 nonprofit groups, including the Sierra Club, the Open Markets Institute and the Action Center on Race and the Economy, urged Congress to consider crypto’s energy use when writing new rules for the sector. “As you explore legislative and regulatory responses to ensure investor protection in the industry, it is critical that you also consider the financial stability risks that climate change presents,” they wrote in a letter shared exclusively with DealBook that took particular issue with many cryptocurrencies’ energy-intensive “mining” process.

Industry players make the case for balance. The venture capital firm Andreessen Horowitz submitted a proposal to the Senate Banking Committee outlining its view on the future of digital assets and decentralized technology. The firm, which runs a big crypto fund, urged lawmakers to “ensure that the private sector can experiment and build” as it protects against “the real downside risks that might otherwise harm individuals.”

They also complain about burnout. Brian Armstrong, the C.E.O. of Coinbase, a large crypto exchange, tweeted yesterday that company chiefs in the U.S. were under too much pressure from officials, the news media and the public. He likened this to the crackdown on companies in China, “putting something that gets too successful in its place.”

Crypto notches a win. The S.E.C. approved Volt Equity’s exchange-traded fund that tracks companies whose values swing with Bitcoin prices, with an emphasis on firms that hold Bitcoin on their balance sheets. It’s not quite a pure Bitcoin E.T.F., but it brings the industry closer to that long-sought goal. Investors want “exposure to Bitcoin price movement,” Volt Equity’s Tad Park told DealBook, without necessarily buying crypto directly.

Collectors Who Caught the Bug

In a Surge of Military Flights, China Tests and Warns Taiwan