Winter Heating Bills Loom as the Next Inflation Threat

After plunging during the pandemic as the economy slowed, energy prices have roared upward. Washington is already moving to offer homeowners relief.

Chimney smoke over Belfast, Maine. Heating costs could rise to levels not seen a decade, even if there isn’t a severe winter.Credit…Tristan Spinski for The New York Times 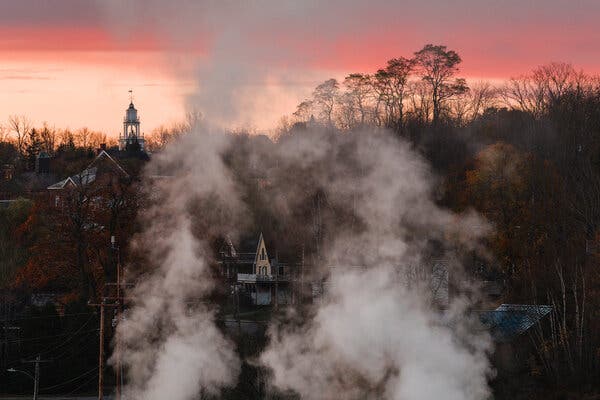 Chimney smoke over Belfast, Maine. Heating costs could rise to levels not seen a decade, even if there isn’t a severe winter.Credit…Tristan Spinski for The New York Times

With consumers already dealing with the fastest price increases in decades, another unwelcome uptick is on the horizon: a widely expected increase in winter heating bills.

After plunging during the pandemic as the global economy slowed, energy prices have roared upward. Natural gas, used to heat almost half of U.S. households, has almost doubled in price since this time last year. The price of crude oil — which deeply affects the 10 percent of households that rely on heating oil and propane during the winter — has soared by similarly eye-popping levels.

And those costs are being quickly passed through to consumers, who have become accustomed to cheaper energy prices in recent years and now find themselves with growing concerns about inflation this year.

In the United States, the winter months account for about 50 to 80 percent of residential fuel consumption. And there is “a significant chance” consumers could face a “marked increase” in prices for heating, said Nina Fahy, an analyst for Energy Aspects, a research consultancy.

Last winter was warmer than average, which led to residential energy bills that were comparatively low. This season, heating costs could rise to levels not seen a decade, even if there isn’t a severe winter. Several factors — lower global fuel inventories, incentives for producers to let prices rise and a mismatch between supply and demand as economies emerge from the pandemic — may combine to push bills higher regardless.

Mark Wolfe, executive director of the National Energy Assistance Directors’ Association, a group of state officials administering aid to low-income households, says those living paycheck to paycheck, or just trying to save, aren’t going to be soothed by complex explanations about inventory levels, supply chains or global demand. When the bills start coming in December or January, he said, “the public’s going to get angry.”

Expert forecasts suggest that the southern half of the country, which has milder winters and relies on relatively cheap electricity for home heating, may enter spring largely unscathed. But the Northeast and the Northern Plains, as well as rural areas nationwide, are far more dependent on heating oil and propane, which are highly exposed to price spikes in commodity markets.

Reflecting the particular concern in their region, a bipartisan group of senators from New England — led by Susan Collins, Republican of Maine, and Jack Reed, Democrat of Rhode Island — sent a letter to the White House last week urging “targeted actions” to provide relief “given the current state of energy markets.”

Last week, the Biden administration released 90 percent of the $3.75 billion in funds dedicated to the Low Income Home Energy Assistance Program, which provided an average of $439 to more than five million families the year before the pandemic. It received $4.5 billion in additional emergency grants this year. Usually, funding for the program isn’t released until all budget items for the fiscal year are approved, but Congress recently made an exception as cold months approached and sparring over spending bills continued.

Mr. Wolfe’s group has urged Congress to include $5 billion more for the program in the social safety net package being negotiated in Washington.

The increase in home heating costs is sure to hover over economic debates in Washington about inflation. White House allies, fighting to push through the president’s sweeping agenda, assert that the current surge in consumer prices mostly reflects pandemic disruptions that will dissipate next year. Federal Reserve officials, who have been trying to put in place a policy framework less keenly sensitive to inflation, will be pushed to gauge whether that contention is well founded.

The latest outlook from the National Oceanic and Atmospheric Administration suggests a decent chance of a milder-than-average winter. But according to projections by the U.S. Energy Information Administration, if winter is somewhat colder than usual, energy bills could rise 15 percent for households heated by electricity, 50 percent for those depending on natural gas and 59 percent for those that mostly use heating oil. Propane users would be in for the biggest blow — a 94 percent increase, or potentially hundreds of dollars over the six-month heating season.

As with other price shocks stemming from the pandemic, the pain will be particular acute for those of limited means. Twenty-nine percent of those surveyed by the Census Bureau have reported reducing or forgoing household expenses to pay an energy bill in the last year.

Before the pandemic, Jamillia Grayson, 43, of Buffalo, had a successful event-planning business. Her work dried up, and even with unemployment insurance, she couldn’t meet household expenses while supporting her 8-year-old daughter, who has sickle cell anemia, as well as an older aunt, who depends on a home oxygen tank and lives with them.

Electricity and gas bills piled up throughout this year, and by the end of the summer, she owed $3,000, she said.

Ms. Grayson applied for funds from the Emergency Rental Assistance Program, part of the American Rescue Plan passed by Congress in March, which eligible renters can use to cover their utility costs. “But the paperwork was so long, it was so hard,” she said. “So as my last resort, I’m like, ‘OK, let me just try Catholic Charities.’”

Within three weeks of reaching out, she received a letter from Catholic Charities of Buffalo notifying her that their staff had helped her get approval for about $3,600 to address her unpaid gas and electric bills through New York’s Home Energy Assistance Program.

Ms. Grayson estimates that about half of her neighbors are struggling to some degree to cover bills along with rent, especially since the federal supplement to unemployment benefits has expired. And she said she hoped more of them find some measure of help as she did: “You might have to do some research, but there are people who are helping.” 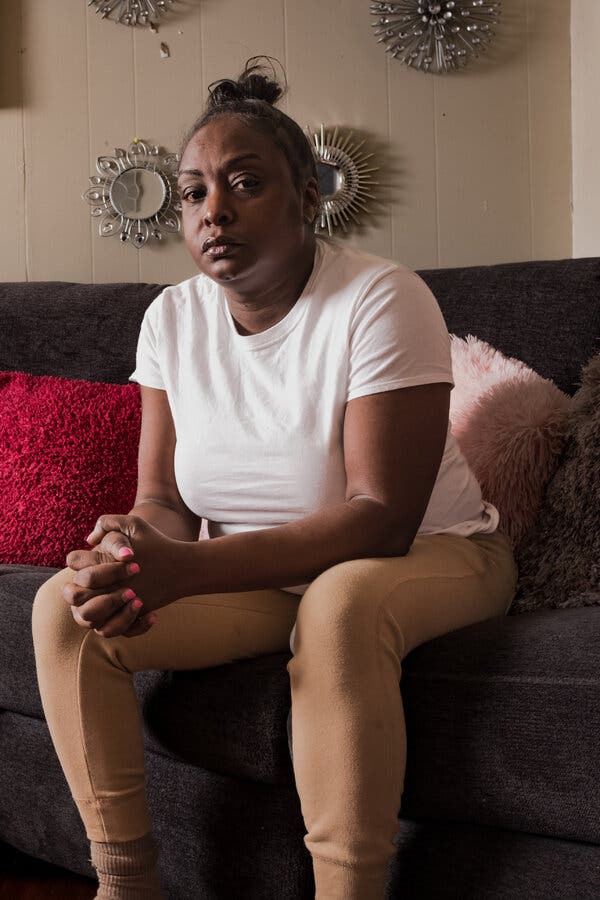 Jamillia Grayson got aid to pay off her gas and electric bills after her work dried up during the pandemic.Credit…Malik Rainey for The New York Times

But Jeffrey M. Conrad, a senior director at Catholic Charities of Buffalo, is worried that both nonprofit and government assistance programs could be overwhelmed once New York’s moratorium on utility payments expires in December.

Covid’s impact on the supply chain continues. The pandemic has disrupted nearly every aspect of the global supply chain and made all kinds of products harder to find. In turn, scarcity has caused the prices of many things to go higher as inflation remains stubbornly high.

Almost anything manufactured is in short supply. That includes everything from toilet paper to new cars. The disruptions go back to the beginning of the pandemic, when factories in Asia and Europe were forced to shut down and shipping companies cut their schedules.

First, demand for home goods spiked. Money that Americans once spent on experiences were redirected to things for their homes. The surge clogged the system for transporting goods to the factories that needed them and finished products piled up because of a shortage of shipping containers.

Now, ports are struggling to keep up. In North America and Europe, where containers are arriving, the heavy influx of ships is overwhelming ports. With warehouses full, containers are piling up. The chaos in global shipping is likely to persist as a result of the massive traffic jam.

No one really knows when the crisis will end. Shortages and delays are likely to affect this year’s Christmas and holiday shopping season, but what happens after that is unclear. Jerome Powell, the Federal Reserve chair, said he expects supply chain problems to persist “likely well into next year.”

“Once January hits, that’s where the rubber is going to meet the road, and we need to be prepared for an influx of people coming to us,” he said.

Power companies, Mr. Conrad said, are bracing for a “March wave” of missed payments and requests for grace periods — especially since moratoriums on utility payments have expired in many states. Although in many instances it may be against state law for a utility company to cut off customers’ heat during winter, “some people are going to be on the hook for, in some cases, thousands and thousands of dollars,” he said.

There are some somber ways for consumers to bring down their bills. The Energy Department says that turning the thermostat down 7 to 10 degrees from its normal setting can cut winter energy costs 10 percent.

Larry Dawson, chief executive of the Illinois Association of Community Action Agencies, which provides energy assistance to people with lower incomes, emphasized that some of the steps that best reduce bills — retrofitting homes for energy efficiency, or installing heating insulation — tend to have the highest upfront costs.

“Most of the folks we serve are below 200 percent of the federal poverty level,” he said. “They don’t have the money to be able to make the upgrades to these homes.” And lower-income families are more likely to live in poorly weatherized dwellings that lend themselves to high energy bills in summer and winter.

Decisions by energy companies have also shaped this winter’s prospects. Producers could have more quickly ramped up production to create more supply once it became clear that the economy was reopening. But several industry experts say that would have been out of line with the retooled profit strategies of oil and gas companies and their investors, who are hungry for financial returns after several years of underwhelming performance.

So far, despite a relative uptick in production compared to pandemic lows, companies are mostly practicing that discipline: a savvy business move that may nevertheless intensify the increase in consumer bills.

If energy bills do create widespread hardship in the coming months, planning and organizing assistance may largely fall to locally based nonprofit groups like Catholic Charities of Buffalo — a challenge Mr. Conrad says he accepts as a duty. “It’s what our faith is based on,” he said. “It’s really what all of our religions are based on. It’s helping your neighbor.”

Tags
Home House Over Sai̇d She

Retailers Scramble to Attract Workers Ahead of the Holidays