A Senate panel on Tuesday intensely questioned Dr. Robert Califf, the nominee for commissioner of the Food and Drug Administration, on pressing issues like the coronavirus pandemic, the opioid crisis, his financial ties to the pharmaceutical industry and possible changes in the rules for medications used for abortion.

Ranking members of the panel expressed solid confidence in Dr. Califf, 70, signaling that his confirmation to the commissioner’s post for a second time might receive bipartisan support by the full Senate. Dr. Califf is familiar to most members of the Senate: He had been F.D.A. commissioner in the last year of the Obama administration, confirmed by the Senate by a vote of 89-to-4.

If confirmed this time around, Dr. Califf would assume command of an agency that has been led on an interim basis by Dr. Janet Woodcock for nearly a year. It is unlikely that he would be confirmed before 2022, as the United States heads into its third pandemic year and anticipates vaccines for children younger than 5 and new Covid-19 treatments. 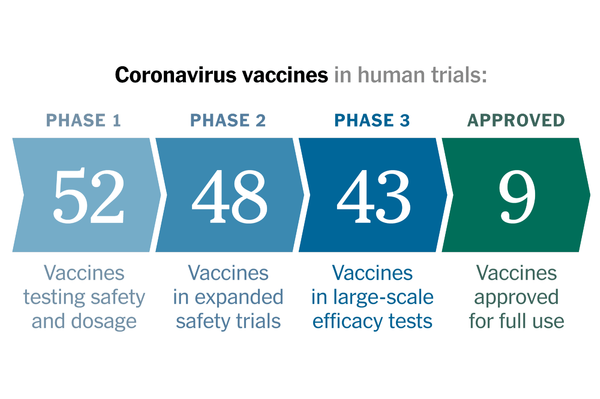 A look at all the vaccines that have reached trials in humans.

During the Trump administration, the agency came under scrutiny for caving in to political pressure as the pandemic unfolded. A flurry of decisions that allowed questionable treatments and other products to flood the market stirred concerns. Dr. Califf would also inherit frustrations over the cost and scarcity of rapid tests, the challenges posed by a mutating coronavirus and a demoralized staff. At the hearing, Dr. Califf said emergency preparedness and response would be his first priority, but he offered few specifics.

Members of the Senate Committee on Health, Education, Labor and Pensions expressed satisfaction with the agency’s pandemic response so far. Senator Richard Burr of North Carolina, the panel’s ranking Republican member, said the next commissioner could “not take their foot off the gas.”

Senator Patty Murray, a Washington Democrat who led the hearing, said she received 13 letters of support for Dr. Califf from 90 signatories, including six former agency commissioners.

The Senate hearing grew emotional when some members delved into the devastating toll wrought by the opioid epidemic. Fatalities are at a historic peak, with 100,000 deaths through the 12 months that ended in April. Critics in Congress are bitter over the agency’s handling of the potent painkillers.

Even before the hearing, Senator Joe Manchin, a West Virginia Democrat whose state has felt the drug crisis acutely, announced on Tuesday that he would oppose Dr. Califf’s confirmation, noting that opioid deaths have only mounted since Dr. Califf’s previous term as commissioner. In 2016, Senator Manchin delayed and voted against Dr. Califf, citing the same concerns that Dr. Califf would do little to curb the opioid epidemic.

“It is abundantly clear the F.D.A. has failed to keep Americans safe,” Senator Manchin said in a statement on Tuesday. “How many more Americans have to die before we see a culture change at the F.D.A.? If there was ever a time for a change in leadership at the F.D.A., an institution with such direct impact on the American people, it is now.”

Another senator, Richard Blumenthal, a Democrat from Connecticut, said he had “grave reservations” about Dr. Califf’s nomination. He had voted against him five years ago, too.

At the hearing, Senator Maggie Hassan, a New Hampshire Democrat, criticized the agency for failing to change opioid policies as the death toll soared for years. She called for an overhaul of opioid medication labeling. Senator Ben Ray Luján, a Democrat from New Mexico, expressed outrage about the 2013 approval of the medication Zohydro, which was authorized over the objection of an agency advisory committee.

“Something’s got to change,” Senator Luján said. “And I’m hoping, doctor, that you can be that person.”

The senators’ concerns drew a pledge from Dr. Califf that he would undertake a “comprehensive review” of the agency’s opioid policies if he were confirmed. He said he would look at options for addressing the crisis, including a change to the labeling of opioid medications. “If I’m confirmed, I’m going to take a very aggressive approach on this,” he said.

The hearing concluded without a vote. The panel will take one at a later date, and that would be a precursor to a full vote in the Senate, which has not yet been set. Dr. Califf’s earlier stint as commissioner lasted nearly a year, until President Donald J. Trump was sworn into office.

Dr. Califf’s other experience at the agency as deputy commissioner for medical products and tobacco may help guide him as the agency considers how to proceed with new vaping products and whether to allow Juul to stay on the market. The F.D.A. recently authorized an electronic cigarette to be sold in the United States, a decision that weighed the benefits of helping some adults quit smoking against the risk of youth addiction. Dr. Califf described the level of youth vaping as an “alarming rate,” noting that the appointment of a new leader of the agency’s tobacco unit would be a key decision.

The agency has a role in approving and ensuring the safety of an array of products, including prescription and over-the-counter drugs, medical devices, food and tobacco products. It touches on goods that account for 20 cents of every dollar Americans spend.

Another issue at Tuesday’s hearing, raised by Republican lawmakers, was the F.D.A.’s imminent decision on mifepristone, the first of two drugs given to terminate a pregnancy in the initial 10 weeks of gestation. The abortion drug had been highly restricted by the F.D.A., which for years required it to be dispensed to patients in person by specially certified medical providers.

In April, the F.D.A. temporarily lifted the in-person requirement for the duration of the pandemic, writing in a letter to doctors’ groups that a review of medical literature showed few adverse events from the treatment and noting the risk of Covid-19 transmission during office visits. The letter, signed by Dr. Woodcock, allowed dispensing through the mail, making it easier for patients to get the pills. Biden administration officials have been concerned that Republicans’ objections to that decision could strengthen opposition to Dr. Califf’s nomination.

“I can assure you the staff will be looking at the latest data and apply the best science and make the best possible decision,” Dr. Califf told the Senate panel. “I have confidence in that staff and I know them well.”

Throughout the hearing, Dr. Califf emphasized the importance of generating and relying on thorough data and using it to advance therapies that work and abandon those that fail. He outlined his contributions as a researcher to cardiology drug and device development that had “helped millions of Americans.” He said, “I learned firsthand that it is essential that we produce high-quality evidence to sort the effective and ineffective treatments.”

Pfizer’s Covid pill. A study of Pfizer’s oral Covid treatment confirmed that it helps stave off severe disease, even from the Omicron variant, the company announced. Pfizer said the treatment reduced the risk of hospitalization and death by 89 percent if given within three days of the onset of symptoms.

The Omicron variant. The latest Covid-19 variant, which has been detected in dozens of countries, seems to dull the power of the Pfizer vaccine, but the company said its boosters offer significant protection. Omicron appears to spread rapidly, though it may be less severe than other forms of the virus.

A new wave in Europe. Prime Minister Boris Johnson of Britain said that the country’s vaccine booster program would be accelerated to counter a “tidal wave of Omicron,” while authorities in Denmark and Norway predicted the new variant will dominate both countries in a matter of days.

But Dr. Califf’s career was also held up as an example of the “revolving door” nature of the agency, where officials one day are regulating major drug and device companies and upon leaving, accepting lucrative jobs in the industry. Since Dr. Califf left his post as F.D.A. commissioner, he has shifted from mostly academic leadership at Duke University to executive and consulting roles with pharmaceutical and biotech companies.

Senator Bernie Sanders, of Vermont, noted that nine out of the last 10 F.D.A. commissioners went on to work for or served on boards of directors in the pharmaceutical industry.

“Unfortunately, Dr. Califf, you are not the exception to that rule,” Senator Sanders said, asking how the American people can “feel comfortable you’re going to stand up to this powerful special interest.”

“I have a history of doing that,” Dr. Califf replied, noting that he agreed to comply with the agency’s ethics pledge.

In May 2017, Dr. Califf joined Verily, the life sciences arm of Google, and reported $2.7 million in income and between $1 million and $5 million in stock from his role as head of clinical policy and strategy, according to an ethics disclosure. In another government ethics filing, he said he would resign from the position upon confirmation.

Dr. Califf’s pledges to modernize the F.D.A., though, echo arguments of his supporters, who say working in the industry provides critical knowledge and insight into lifesaving technology. He nodded to his recent experience in technocrat medicine, repeatedly invoking the need for better data to guide decision making.

“All F.D.A.’s actions regarding the products the agency regulates must focus on protecting consumers and patients,” he said. “Safety matters.”

His income disclosure indicated that he retired in November 2019 from Duke University, where he had been a tenured professor and founding director of the Duke Clinical Research Institute. He continued to serve as an adjunct professor, but said he would resign from that role as well if confirmed.

Dr. Califf also said that he would resign from leadership roles at pharmaceutical and biotech firms, divest his stock and refrain from direct decision-making related to companies where he served as a compensated board director. He was awarded more than $1 million in unvested stock options as a board director of Centessa Pharmaceuticals, the disclosure shows, some of which will be “accelerated” so he can cash them out; other shares will be forfeited. The company is working on therapies for hemophilia, narcolepsy and other conditions. He earned at least another $850,000 from stock options in Cytokinetics Inc., a South San Francisco company developing therapies for people with impaired muscle function.

Tags
New Off Sai̇d Senator That

As Omicron Crests, Booster Shots Are Keeping Americans Out of Hospitals

Can Omicron Cause Long Covid?

Why Are Men More Likely to Die of Covid? It’s Complicated.

In Sewage, Clues to Omicron’s Surge