Artists, models and fashion people crowded into Holiday Bar in Greenwich Village on Sunday to toast the latest issue of Paradigm Trilogy, a digital publication started by Katharina Korbjuhn, a creative director who has led ad campaigns for the Italian luxury brand Tod’s, the French couture house Schiaparelli and other fashion companies.

Ms. Korbjuhn, 29, who worked as a model when she was a teenager, described Paradigm Trilogy as “cultural theory wrapped in fashion.” Because it has no print edition, she said, she prefers to call it a publication, rather than a magazine. The first issue, which came out in December 2021, began with an article headlined “How Stalin Predicted TikTok.” It was distributed via a QR code printed on matchboxes left at the Odeon, Lucien and other Lower Manhattan hot spots.

As its name suggests, Paradigm Trilogy is scheduled to have only three issues. The party on Sunday was for the second one, built on the theme “Man vs. Machine.” Guests could access the new issue by hovering their smartphones over miniature hydrostone sculptures depicting the head of the model Paloma Elsesser.

Images of Paradigm on a table at Holiday Bar in Greenwich Village.Credit…Gabby Jones for The New York Times

“Man versus machine does not exist,” said Ms. Korbjuhn. “There is no such thing. We are the machine. The machine is us. The tree is me. If we dissolve binary thinking, we’re going to answer all the questions.”

“This issue is quite political,” she continued. “But I can use fashion to glitz over it, make it sexy.”

Party guests were packed around the travertine bar at the back of the restaurant during dinner service. They drank sparkling Brazilian wine while they mingled. Jak Ritger, a writer and artist who contributed to Paradigm Trilogy, wore a seven-layer silk-screen T-shirt painted by another contributor, Tobias Spichtig, over a long-sleeve mock turtleneck. He called it his “go-to fine-art raver outfit.”

In the latest issue, Mr. Ritger helped create a feature that combined vintage Schiaparelli ads with images made by artificial intelligence programs like Midjourney and DALL-E. “There is a big backlash against these kinds of images,” he said. “It’s like, ‘Oh, this is so hideous and ugly.’ But hideous and ugly is actually beautiful.”

Paradigm Trilogy’s coder, Ian Glover, took out his phone to show off works that were on display at his nascent Lower Manhattan art gallery, Blade Study, in an exhibition called “Better World.” A problem was that Instagram kept deleting pictures of the artwork. A scenic painting of a utopian New York City was banned twice for so-called “critical posting,” he said, and a collage of vintage pornography was taken down six times. Mr. Glover reposted increasingly blurred versions. The permissible shots were illegible.

It all seemed very apropos: The “Man vs. Machine” issue includes a piece that nods to the 2009 essay “In Defense of the Poor Image” by the filmmaker Hito Steyerl. The text, superimposed on modified ads for high-fashion brands, asks if we are “coming to love blurry, pixelated, low-res images.”

Guests hovered their phones over sculptures made by Mr. Raheem to gain access to the new Paradigm issue.Credit…Gabby Jones for The New York Times

Hamzat Raheem, the artist who made the miniature sculptures of Ms. Elsesser’s head, entered the room in a striking ensemble — white rain boots, white Dickies, a white fishing jacket from a hardware store in Japan, white Oakley glasses worn upside-down and a white knitted scarf he said he had commissioned by posting an Instagram story asking his followers if anyone could make him a scarf for $50.

“Man versus machine is something I think about a lot,” Mr. Raheem said. He added that because he had a stroke at age 23, he was mindful of his reliance on technology. “I have a battery in my chest that’s connected via Bluetooth to my phone,” he said, “and I have to keep my phone on me all the time because that’s how my pacemaker communicates with the clinic.”

His sculptures were embedded with near-field communication chips. When I hovered my phone over one of them, the Paradigm Trilogy issue failed to appear on my screen.

The crowd at Holiday Bar on Sunday.Credit…Gabby Jones for The New York Times

“Take this as seriously as you want,” Mr. Raheem said, “but there is a fluttering piece of consciousness inside of it. I do think it gets nervous when the attention is on it.”

When he programmed and tested the sculptures earlier that day, they all worked, he said. But he seemed all right with the idea that they might be a little buggy.

“That’s the thing,” Mr. Raheem said. “You want something to work, generally. But it is way more poetic when it works sometimes and then doesn’t work. I’m trying to find a third thing between working and not working.”

Tags
Art That Time Was York

The Jewelry Designer Bringing Back Teardrops, Hearts and Smiley Rings

The Hospital Makes a House Call

A New Expansion of The 1619 Project 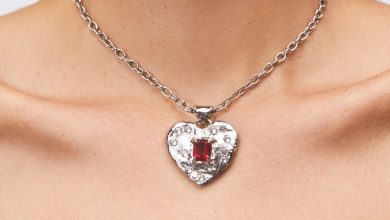 Heart Accessories, Love Them or Hate Them