WASHINGTON — Robert J. Dole — celebrated son of Kansas, lawmaker, presidential and vice-presidential runner-up, champion of the rights of veterans and the disabled, an enduring icon in the life of the Capital — was memorialized Friday in a grand send-off at Washington National Cathedral.

President Biden eulogized Mr. Dole, his longtime Senate colleague who died Sunday at 98, calling him “a genuine hero,” who “never forgot where he came from” and always adhered to the ideal that “no first-class democracy can treat people like second-class citizens.”

It was the second day of tributes in Washington to the former Senate majority leader who worked with Democrats to advance Social Security, protect the disabled and rework the Supplemental Nutrition Assistance Program, or SNAP, commonly known as food stamps. 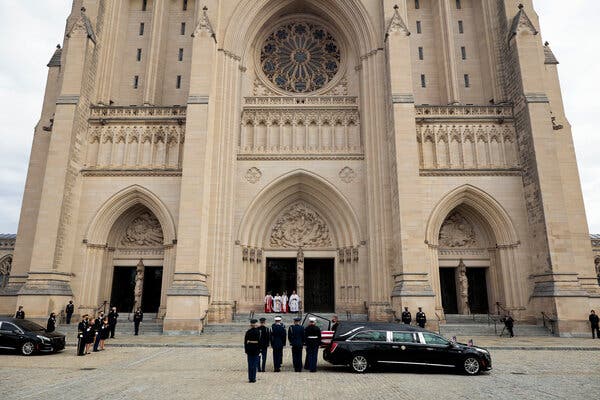 Also present was former President Bill Clinton, who defeated Mr. Dole in his 1996 re-election campaign and then presented his former opponent with the Presidential Medal of Freedom just three days before his second inauguration. “I had a dream that I would be here this historic week receiving something from the president,” Mr. Dole said in accepting the award in the East Room of the White House. “But I thought it would be the front door key.”

Such trademark wit was a recurring theme of the tributes. Mr. Biden recalled a contentious Senate debate over funding for Amtrak, the rail service that then-Senator Biden relied on for his nightly commutes home to Wilmington, Del. To Mr. Biden’s great surprise, Mr. Dole broke with his party to cast a deciding vote to secure the funding

“He was asked, ‘Why, why would you do that?’” Mr. Biden recounted. “He said, ‘It’s the best way to get Joe Biden the hell out of here at night.’” The cathedral filled with laughter. “Excuse my language,” Mr. Biden said, turning to the clergy seated nearby. “True story, absolutely true story.”

The National Cathedral in Washington on Friday.Credit…Kenny Holston for The New York Times

There have been a number of these memorial spectacles at the Cathedral in recent years: Former Secretary of State Colin Powell’s funeral was in November, and former Senator and Navy Secretary John Warner’s was held in June. Senator John McCain’s funeral was at the cathedral in September 2018, followed in December of the same year by the service for former President George H.W. Bush.

The Very Rev. Randolph Hollerith, the dean of the cathedral, referred to this string of losses at the start of the program, noting how recently many of these same guests had convened for Mr. Powell’s farewell. “We have indeed seen too much loss in recent days,” Dean Hollerith said.

Guests began arriving at the cathedral in Northwest Washington just after dawn of what would be a packed day of business from the White House to the Capitol to the Supreme Court. The funeral was a part of it as cable news networks carried the service live and correspondents did live shots from the cathedral lawn.

Mr. Biden, who shortly after his inauguration visited the Doles at their Washington home after his old friend learned he had lung cancer, said Mr. Dole’s love of country always prevailed over tribal political instincts.

“We disagreed, but we were never disagreeable with one another,” said Mr. Biden, who came to the Senate in 1973, four years after Mr. Dole arrived, and served with him for 23 years. “I found Bob to be a man of principle, pragmatism and enormous integrity,” Mr. Biden said. “He came into the arena with certain guiding principles to begin with: devotion to country, to fair play, to decency, to dignity, to honor, to literally attempting to find the common good.”

But Mr. Dole was also a Republican to the core, and fiercely partisan at times. He was the only living former Republican presidential nominee who publicly supported Donald Trump in his general election campaign.

While Mr. Dole retired from the Senate after 27 years in 1996, the year he became his party’s presidential nominee, he has remained a presence across a broad cross-section of cultural spaces. This included his enthusiastic — and lucrative — willingness to serve as a pitchman for products such as Visa, Dunkin’ Donuts and, most notably, Viagra, the erectile dysfunction drug, which invited a fair share of squeamishness at the time.

“Any second thoughts I may have entertained,” Mr. Dole wrote in a 2012 Washington Post opinion piece, briefly addressing his Viagra association, “were put to rest by a couple of wives who approached me in airports to say, simply, ‘Thank you, Senator.’”

In his remarks, Mr. Biden recalled traveling to Normandy with Mr. Dole for the 50th anniversary of D-Day. He told the audience a story of Mr. Dole helping a “fallen comrade” as they took on gunfire.

“There’s something that connects that past and present,” Mr. Biden said. “Wartime and peace. Then and now. The courage, the grit, the goodness and the grace of a second lieutenant named Bob Dole who became Congressman Dole, Senator Dole; a statesman, husband, father, friend.”

After his remarks, Mr. Biden stepped down from the stage and paused for a moment at Mr. Dole’s coffin before returning to his seat.

Will Jussie Smollett Be Sentenced to Prison for Lying to the Police?

Top Jan. 6 Investigator Fired From Post at the University of Virginia

Biden’s Pandemic Fight: Inside the Setbacks of the First Year