BOSTON — When Al Horford was 14 years old, he moved from the Dominican Republic, where he’d been raised by his mother in Santo Domingo, to Michigan, where his father and four of his half-siblings lived.

“That was just so awesome,” said Anna Horford, 29, Al’s half sister. “He helped raise us.”

He babysat his siblings, and they’d play baseball, volleyball or basketball in the backyard. Anna recalled Al skipping high school parties to stay with them.

When they got old enough to go to parties themselves, he’d advise them, urging them to be safe and call him if they needed a ride.

She added: “I joke that he’s like the team dad of the Celtics. Because he’ll always kind of put the guys in line, or when he speaks they kind of really make sure to listen and pay attention and give him that respect.” 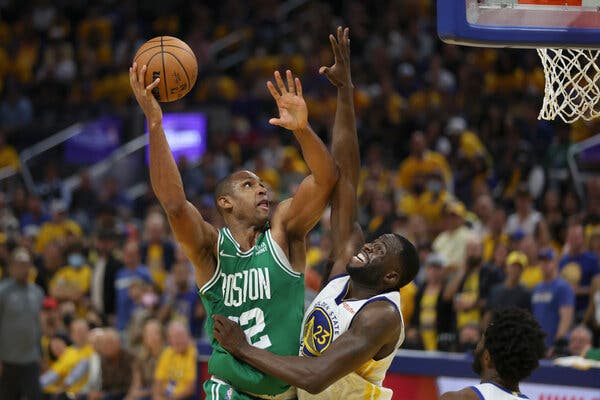 Horford, at 36 years old, is the oldest player on the Celtics.Credit…Jed Jacobsohn/Associated Press

At the start of this season, Al Horford, 36, was the only Celtics player in his 30s. Boston’s core group includes three 20-somethings, Jayson Tatum, Jaylen Brown and Marcus Smart, who were just starting their N.B.A. journeys six years ago when Horford first became a Celtic.

He left Boston briefly before returning this season, and has provided veteran leadership and stability to an otherwise young Celtics team. His presence and his play have helped Boston make a push for the franchise’s 18th championship.

When Boston clinched the Eastern Conference championship with a Game 7 win over the Miami Heat, Horford became the first Dominican player to make it to the N.B.A. finals. Across tenures with Atlanta, Boston and Philadelphia, he had played in 141 playoff games without making a finals appearance — more than any other player.

The outpouring of emotion he displayed as the Celtics celebrated their conference title reflected how much it meant to him. But it meant a lot to his teammates, too.

“Nobody deserves it more than this guy on my right, right here, man,” Brown said that night. “His energy, his demeanor, coming in every day, being a professional, taking care of his body, being a leader — I’m proud to be able to share this moment with a veteran, a mentor, a brother, a guy like Al Horford, man.”

Horford was emotional after the Celtics beat the Miami Heat in the Eastern Conference finals, allowing him to make his first trip to the N.B.A. finals.Credit…Eric Espada/Getty Images

The Celtics drafted Brown in 2016, a few weeks before Horford signed a four-year deal with the team. The next summer, Boston selected Tatum No. 3 overall. Smart had been drafted sixth overall in 2014.

Horford spent three years with Boston — two with Brown, Tatum and Smart — and the Celtics went to the conference finals twice and lost in the conference semifinals once. He opted out of the last year of his contract in 2019 and joined the 76ers as a free agent.

In December 2020, the 76ers traded him to the Oklahoma City Thunder, who hardly used him. In June 2021, Boston traded with the Thunder to get him back.

“I do believe everything happens for a reason,” Horford said. “This was a time for them to grow and also for me to grow as well. Me getting a different perspective and now appreciating even more what I have here.”

When Brad Stevens, the Celtics’ president of basketball operations and the team’s previous head coach, called to tell Horford about the trade, Horford was in a car with his family. They all started screaming with excitement.

“I think it kind of feels like home to him,” Anna Horford said of Boston. “This is the first place he’s played where his kids were old enough to be aware of being at games. Ean was just a baby in Atlanta. Him going to school here, making friends here, his other kids as well. This was the first place that really felt like home as an entire family.”

Home is a particularly meaningful concept to someone as transient as Horford has been.

In Santo Domingo, his mother, Arelis Reynoso, was a sports journalist and occasionally took him on assignment.

“I felt like I was really independent from a really young age over there,” Horford said. “It was just very special, that time with my mom.”

He moved to Michigan for high school, then went to college at Florida, where he won two national championships with two other players who had notable N.B.A. careers: Joakim Noah and Corey Brewer.

The Hawks drafted him third overall in 2007, and he made his first four of his five All-Star teams while playing in Atlanta.

Horford said he grew in his two seasons away from the Celtics, when he left for Philadelphia in free agency and then was traded to Oklahoma City.Credit…Allison Dinner for The New York Times

The seeds of his long career were planted there.

“I saw his daily habits,” said Kenny Atkinson, who was an assistant coach with the Hawks while Horford played there. “Al is going to be like Nolan Ryan: He’s going to play until he’s 45. He’s so impeccable about it.”

Atkinson helped Horford develop a 3-point shooting game, which has also helped lengthen his career in a league that has been phasing out big men who can’t shoot.

Atkinson is now an assistant for Golden State. He spoke the day after Horford scored 26 points and made six 3-pointers in Boston’s Game 1 win over Golden State.

What does he think about how Horford’s career has persisted?

“I hate it,” Atkinson said, deadpan. “But I’m not surprised.”

In his return to Boston, Horford tried to share with his younger teammates the habits he’d developed over time. They were more than happy to accept the counsel.

“When I see them talk to Al it’s almost like a teacher and a student,” said Juwan Morgan, a third-year forward who signed with Boston just before the end of the regular season. “You can just see the respect factor. When Al talks everybody is just silent, listening because they know it’s for the good of the team.”

Horford called it a mutual respect.

It’s the same language Horford uses when he talks about his younger siblings and the ways that he has mentored them.

“To me that’s important to help them in any way so they can thrive in whatever they choose in life,” Horford said.

Al Horford, left, with his son, Ean, center, and his father, Tito, who also played in the N.B.A.Credit…Allison Dinner for The New York Times

He seems to be passing that caretaker mentality on to his son.

Ean is a gregarious 7-year-old with a head full of curly black hair. He loves basketball and hanging out in the locker room with his father’s co-workers. After Games 1 and 3 of the N.B.A. finals, Al Horford held his hand and brought him to the podium so he could be part of the postgame interview. Ean winked at the camera after Game 1.

Unlike her brother, Alia, 5, wasn’t allowed to come to Game 3 because the start time, 9 p.m. Eastern, was too late. But she wanted to go so badly she drew a picture of Al, his wife Amelia Vega, and Ean at the game and left it on her father’s bed so he could see when he got home.

Horford sees a lot of himself in his son, particularly in his observational skills and competitive fire.

In Ean, he also sees a child who loves the responsibility of being a big brother, loves protecting and teaching his younger siblings. That’s another thing he shares with his father.

Tags
Boston Game Play That This

The Race to the Start Line: Returning to Running After Having Covid-19

On a Long Climb to the Top, She Makes Short Work of an Opponent

Who Is Harmony Tan, the Player Who Beat Serena Williams at Wimbledon?

Iga Swiatek, a World No. 1, Gets Comfortable Using Her Clout