In Shark Bay, off the westernmost tip of Australia, meadows of sea grass carpet the ocean floor, undulating in the current and being nibbled on by dugongs, cousins of Florida manatees. A new study revealed something unexpected about those sea grasses: Many of them are the same individual plant that has been cloning itself for about 4,500 years.

The sea grass — not to be confused with seaweed, which is an algae — is Poseidon’s ribbon weed, or Posidonia australis. Jane Edgeloe, a University of Western Australia Ph.D. candidate and an author of the paper, likens its appearance to a spring onion.

Ms. Edgeloe and her colleagues made their discovery as part of a genetic survey of Posidonia grasses in different areas of Shark Bay, where she SCUBA dived in the shallow waters and pulled up shoots ofPosidonia from 10 different meadows. On land, the researchers analyzed and compared the grasses’ DNA.

They published their results Wednesday in the journal Proceedings of the Royal Society B. It turned out the DNA of many of those seemingly different plants were virtually identical. Elizabeth Sinclair, also of the University of Western Australia and an author of the study, recalled excitement in the lab when she realized: “It’s only one plant.”

While some of Shark Bay’s northern meadows reproduce sexually, the rest of its Posidonia clones itself by creating new shoots that branch off from its root system. Even separate meadows were genetically identical, indicating that they were once connected by now-severed roots. Based on how old the bay is and how quickly sea grasses grow, the researchers surmise that the Shark Bay clone is about 4,500 years old.

In addition to being a clone, the grass seems to be a hybrid of two species and possesses two complete sets of chromosomes, a condition called polyploidy. While polyploidy can be lethal for animal embryos, it can be harmless or even helpful in plants. However, it can result in sterility: Much of the clonal grass does not flower and can only reproduce by continuing to clone itself.

This combination of extra genes and cloning might have been the key to the grass’s survival during a period of ancient climate change: Cloning made reproduction easier because the grass did not have to bother finding a mate. The extra genes could have given the sea grass “the ability to cope with a broad range of conditions, which is a great thing in climate change,” Dr. Sinclair said. 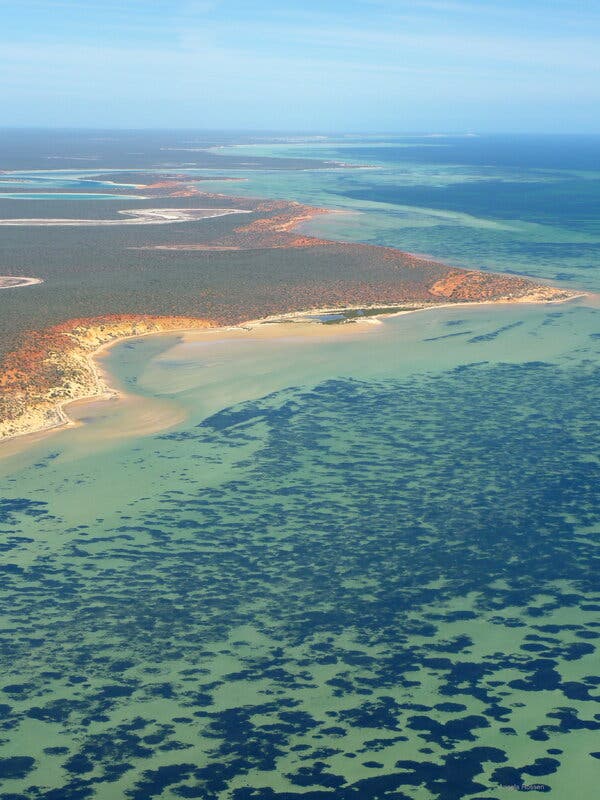 Today, it is arguably the world’s largest living organism. Utah’s Pando, a clonal colony of 40,000 aspen trees connected by their roots, is the reigning “largest individual plant,” covering an area bigger than 80 football fields. The Humongous Fungus is even bigger, weaving a web of mycelial tendrils underground and beneath tree bark across 3.5 square miles of Oregon’s Malheur National Forest. By comparison, the Shark Bay clonal sea grass is 77 square miles, about the size of Cincinnati.

While the Shark Bay clone has reached enormous size and age, the question has remained of whether it would be able to withstand modern climate change. Julia Harenčár, a Ph.D. candidate at the University of California, Santa Cruz who was not involved with the study, praised the project for “trying to understand in greater detail why polyploidy has been advantageous at these big environmental flexion points,” which could offer lessons for the climate crisis.

Sea grasses are particularly important to protect, says Marlene Jahnke, a biologist at the University of Gothenburg in Sweden who also was not involved with the study. She added, “they are comparable to coral reefs, really, in the sense that they host a lot of other species,” along with purifying water and storing atmospheric carbon.

While the stakes are high for sea grasses, Dr. Sinclair remains hopeful that the Shark Bay Posidonia will maintain its status as the world’s largest living plant: While it was harmed in a heat wave from 2010 to 2011, “we’ve seen a lot more increase in shoots, a lot more leaf density, so it’s recovering,” she said. “I think this polyploid is actually probably in a pretty good state in terms of persisting.”

Tags
Can Climate Posidonia That

Earth’s Largest Rodents Were Smaller Than We Once Thought

How Anonymous Is Bitcoin, Really?