BELOKHOROVKE, Ukraine — Out on the riverbank, the scene of mayhem unfolded under a baking spring sun: blown-up tanks, the detritus of pontoon bridges, heaps of branches shorn off by explosions and the bodies of Russian soldiers, some half buried in the mud.

In the forest, a short walk revealed bits of torn Russian military uniforms hanging from trees, an eerie reminder of the troops who died violently here.

The failed river crossing that took place at this spot over several days in early May was one of the most lethal engagements of the war for the Russian army. Its forces had sought to surround Ukrainian soldiers in the nearby town of Sievierodonetsk — but instead became surrounded themselves, boxed in by the river and a Ukrainian frontline. At least 400 Russian soldiers died, mostly from artillery attacks.

As the war grinds across the rolling plains and forests of Eastern Ukraine, the maneuvering of troops has in large part evolved into attempts at entrapment. But as the deadly encounter at the bridge illustrated, the tactic comes with grave risks.

After failing to capture major cities such as Ukraine’s capital, Kyiv, or to cleave off the entire Black Sea coast, the Russian military attempted a major encirclement of Ukrainian troops in the east. That effort is looking difficult now that Ukraine has blocked one main route of advance, near the town of Izyum.

So the Russian forces’ immediate goal has become a smaller encirclement of Sievierodonetsk, the easternmost city in the Donbas region still under Ukrainian control. Artillery bombardments by Russian troops approaching from three sides have ravaged the city, knocking out water and electricity and in the past day killing at least six people. 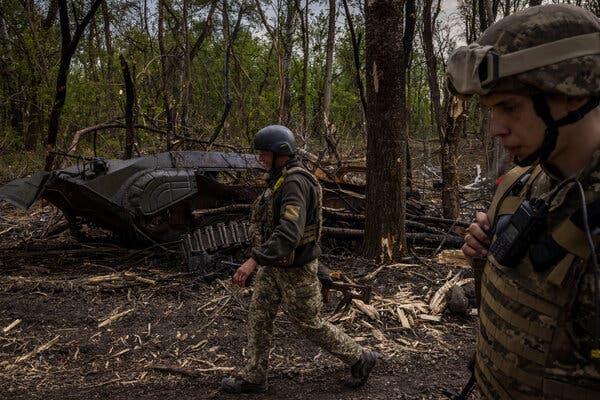 The Russian strategy has been to use the blunt instrument of its army’s vast artillery to pound away at Ukrainian forces, making incremental gains in the Luhansk region of the Donbas. Military analysts and Western intelligence officials believe that Moscow’s forces would face brutal urban combat if they tried to fully capture Sievierodonetsk, and that they would struggle to mount an offensive deeper inside Ukraine.

Encirclement is a harrowing prospect for soldiers.

“I try not to think about it,” said Pvt. Ivan Sichkar, a Ukrainian soldier surveying the destruction of the encircled Russian force. “If I think of being surrounded,there’s no time left to do anything else.”

The Russians’ refashioned goal has focused the battle on a slender, 75-mile front in the Donbas. It is seeking to advance from both the north and the south to close the one remaining supply line for Ukraine into the city of Sievierodonetsk.

On Tuesday, the Russian army advanced from the south, forcing Ukrainian troops to retreat from the small town of Svitlodarsk, lest the Russians envelop the town and trap soldiers inside. And in its Wednesday evening briefing, the Ukrainian general staff described stepped-up attacks by Russian helicopters and jets to support ground troops in the east.

With Russia making only halting progress in Ukraine, President Vladimir V. Putin moved Wednesday to shore up support at home, announcing raises in pensions and the minimum wage and making his first trip to meet with wounded soldiers. “They are all heroes,” he said at a military hospital.

Mr. Putin also signed a decree opening a fast track to Russian citizenship for Ukrainian residents of areas controlled by the Russian military, a further step toward annexing territory in southeastern Ukraine that Russia has occupied.

As Mr. Putin moved to reassure ordinary Russians, Ukraine’s Western allies were trying to maintain pressure on his government. In Ankara on Wednesday, talks took place between Turkey, Finland and Sweden over Turkish concerns about the two Nordic countries’ application to join NATO. At a news conference after five hours of negotiations, Ibrahim Kalin, a spokesman for Turkey’s president, Recep Tayyip Erdogan, said more talks were needed.

“Turkey is not under time pressure,” Mr. Kalin said. “It is not possible for any process to proceed without meeting the security concerns of Turkey.”

The strategy of encirclement has yielded far-reaching political gains for Russia over the course of its longer conflict in the region, in which Russian-backed separatists battled Ukrainian forces for eight years before the full-scale invasion this year. Two cease-fires, known as the Minsk agreements and seen as struck on terms advantageous to Russia, followed successful Russian encirclements of Ukrainian troops in the east in 2014 and 2015.

But in Belokhorovke, a tiny coal mining town on the banks of the Seversky Donets River, the tables were turned earlier this month, at least temporarily slowing the Russian advance.

Ukrainian soldiers who fought in the battle took to calling the site “the ear” for a lobe-like loop in the river where the fiercest fighting took place. The Ukrainian military escorted reporters for The New York Times to the site, which is on a frontline formed in much of the Donbas region by the roiling, fast-flowing river, swollen by spring rain.

Sunlight filters through the foliage of a dense, quiet forest on the river’s floodplain, which was the Ukrainians’ kill zone. Mosquitoes buzz. In places, the smell of decaying corpses is overwhelming.

“The Russian bodies start here,” Private Sichkar said as he rounded a bend in a dirt road extending about mile through the forest to the river’s edge. Just in this one spot, 15 incinerated armored personnel carriers were scattered about.

“The Russians wanted some little victory,” Col. Dmytro Kashenko, the Ukrainian officer who commanded the counterattack on the pontoon bridge, said in an interview. “They tried in Kyiv, they tried in Kharkiv, and they lost. They were trying to win at least something.”

On the ground. Moscow’s military has narrowed its focus to a 75-mile-wide sliver of land in the heart of the eastern Donbas region, which has allowed Russian forces to make incremental gains. Russia’s main immediate target remains Sievierodonetsk, the easternmost city still under Ukrainian control.

A global threat. The president of the European Commission accused Moscow of deliberately trying to provoke a global food crisis by targeting grain warehouses, ports and other critical infrastructure in Ukraine, one of the world’s most important food exporters.

NATO expansion. Delegations from Finland and Sweden are in Turkey to meet with officials in an effort to address President Recep Tayyip Erdogan’s opposition to the Nordic nations’ bids to join NATO. Ahead of the talks, Turkey made a series of security-related demands of Sweden.

In Asia. China and Russia held their first joint military exercise since Moscow’s invasion of Ukraine, as a show of force as President Biden visited the region. At a news conference in Tokyo, the U.S president indicated that, unlike in Ukraine, he would use military force to defend Taiwan if it were attacked by China.

He was ordered to one of the crossings on May 8, after the Russians deployed pontoons and moved soldiers into the forest on the near bank. Ukrainian infantry advanced into the area the next day, but were repulsed, suffering losses, he said.

They then set up a defensive line to box in the Russians as they crossed their pontoon bridge, and rained down artillery fire on the area. They also set about destroying the bridge by placing floating mines upstream, allowing the current to carry them to the Russians’ pontoons, which proved an effective tactic. The Ukrainian forces blew up four separate bridges at the crossing site.

The Russians hastily laid new pontoons and sent armored vehicles across, Colonel Kashenko said, but they were unable to break through the Ukrainian defensive line. Dozens of armored vehicles and infantry soldiers became trapped and were mauled by Ukrainian artillery. The Ukrainians also hit Russian troops involved in the bridge work on the far shore.

The bombardment included some of the first barrages from a newly arrived American artillery gun, the M777, Colonel Kashenko said.

The body of a Russian soldier on the riverbank. Russia took heavy losses there.Credit…

Colonel Kashenko said he had offered the enemy forces a chance to surrender, shouting into a loudspeaker, “‘Russians, give up!’” But, he said, “I don’t know if they heard us.”

Some enemy soldiers escaped by swimming across the river, the Ukrainians said. The Ukrainians have yet to collect the remains of the Russians scattered around the forest.

In the mottled light sifting through the leaves, discarded food and personal items lay all about: a sleeping bag, bottles of shower gel, cans of beef, a bag of potatoes, Russian tea bags, flip-fop sandals.

Ukrainian soldiers found a certificate for a medal granted to a Russian colonel for earlier fighting in the war. It was called an “award for military excellence.”

Beside a disabled Russian tank lay a cardboard box apparently used for carrying supplies. On the box was an odd message for a unit in war: “Always believe something wonderful is about to happen.”

Gen. Philip M. Breedlove, former supreme allied commander in Europe, drew a distinction between the Ukrainian tactics of seeking to target Russian armored vehicles and troops with artillery and the Russian bombardments of towns and cities.

“In the big scheme of things, Ukraine is trying to do maneuver warfare to regain territory and cut off resupply routes,” General Breedlove said. “And Russia is doing more of a grinding, attrition-based warfare.”

Of Russia’s bungled pontoon crossing, he said, “the Russians did something poorly that is difficult even if you do it magnificently.”