SLOVIANSK, Ukraine — A woman berated visiting reporters, accusing them of publishing lies. Others turned away, reluctant to talk. Tensions were running high in the central market of Sloviansk, after rocket strikes earlier this week killed seven people and destroyed shops and houses.

This depleted eastern Ukrainian city is in the cross hairs of the next Russian offensive. After capturing the eastern region of Luhansk, Russian forces have begun a heavier barrage in the neighboring Donetsk region, which includes Sloviansk and several other cities in a pocket of Ukrainian control. The intensified rocket attacks led the mayor to urge remaining residents to leave town ahead of an impending attack.

Visits to Sloviansk by The New York Times over several days revealed a town both angry and defiant, and far from united. While many people have already left and others are preparing to flee, some residents are staying put, with many accusing the Ukrainian Army of shelling the market to scare the population into leaving or even as a ruse to gain more international support. 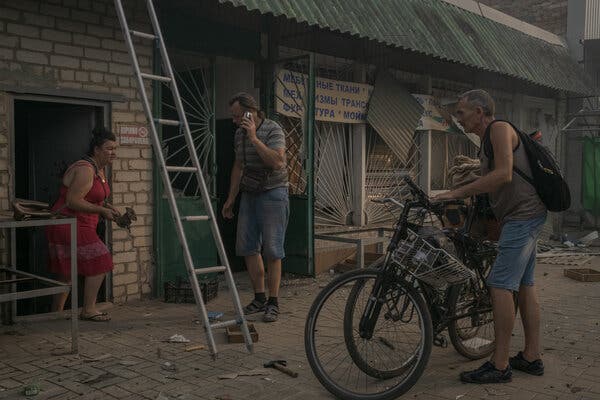 Shopkeepers assessing the damage to their stores. Russian shelling and rocket attacks are picking up in Sloviansk before an expected Russian offensive.

Hennady Kononenko, 74, weeps beside his wife, Nina, 76, in the garden of their destroyed home hit by shelling. Repeating Russian propaganda, he blamed Ukraine for the attack.

“They hit it on purpose,” said Serhii, 62, of the Ukrainian forces as he helped a friend retrieve goods from his damaged store. Like most people interviewed he preferred to be identified only by his first name to avoid censure in time of war.

There is no evidence to back such claims, which have become a staple of a Russian propaganda barrage to try to turn Ukrainians against the government in Kyiv. The head of a fire brigade fighting the flames in the market shook his head when he heard such talk. The direction of the strikes left little doubt that they had come from Russian-held territory, he said.

After failing to seize the capital, Kyiv, early in the war, Moscow concentrated its forces on taking the two eastern regions of the country already partially controlled by separatist forces, Luhansk and Donetsk, known collectively as Donbas.

After seizing control of the city of Lysychansk last weekend — and with it, the entire Luhansk region — Russian troops are regrouping in preparation for a renewed offensive, said the mayor of Sloviansk, Vadym Lyakh.

After seizing control of the city of Lysychansk last weekend, Russian troops are regrouping in preparation for a renewed offensive on Sloviansk, said the city’s mayor, Vadym Lyakh, left.
Most of Sloviansk’s 100,000 residents have cleared out. Of the 23,000 remaining, perhaps half have pro-Russian sympathies.

While Russian troops have not yet unleashed the kind of intense, all-day artillery strikes that they used to capture Lysychansk, they have begun launching daily strikes on the next cluster of cities in neighboring Donetsk — Kramatorsk and Bakhmut, in addition to Sloviansk.

All three cities have been hit by Russian strikes in recent days, and Ukrainian troops have dug in to prepare a defense.

“They are shelling the city, they are shooting at civilians, the number of attacks has increased,” the mayor said of the Russian forces, in an interview in the heavily sandbagged town hall. Previous strikes came in ones and twos, he said, but on Sunday and again on Tuesday, 15 to 20 rockets exploded in intense barrages in the center of town.

“They are actually terrorizing the population,” he added. “In this way, probably, they are preparing for the offensive.” But he was familiar with the line accusing the Ukrainian Army of conducting the strikes.

“Everyone sees what they want,” he said. “They want to believe it.”

A man wounded after a missile struck near his home in Kramatorsk. Russian troops have begun launching daily strikes on a cluster of cities in the Donetsk region — Kramatorsk, Bakhmut and Sloviansk.
A bedroom damaged by an airstrike in Kramatorsk.

Sloviansk has seen its share of tumult since it was founded in the 17th century as an outpost of the Russian empire. It became the first town in Ukraine where pro-Russian separatists seized power in 2014, shortly after Russia’s annexation of Crimea. The Ukrainian Army regained control of the town two and a half months later and it has remained in Ukrainian hands since.

Yet, that history and its continuing affinity and proximity to Russia has colored the way the town and its residents view events and are viewed by others.

While the mayor has urged residents to evacuate the city before it becomes too dangerous to travel, a portion of the population refuses to listen, he said, heavily influenced by anti-Ukrainian propaganda spread by Russian television channels and news media in the separatist areas.

“Apparently, they watch channels and talk with their relatives, who convince them that all this is not true,” Mr. Lyakh said. “It’s very hard to say why this is happening. And what needs to be explained to people in this direction, I am already doing. But they hear the artillery fire, it seems to them that it comes from the Ukrainian army. You won’t convince them.”

He said the pro-Russian portion of the population remained a minority, perhaps half of the 23,000 still remaining out of a prewar population of 100,000.

“These are, apparently, the people who are waiting for the arrival of the Russian Army and the L.D.N.R.,” he said, using a shorthand term for the areas of Luhansk and Donetsk under separatist control. “They already have an ingrained opinion.”

Mr. Lyakh was once seen as a pro-Russian politician. He entered politics as a member of the pro-Russian party of former President Viktor F. Yanukovych and opposed the democracy protests that overthrew him in 2014. He is serving his second term as mayor of Sloviansk, as a member of an opposition bloc that was formed from the remnants of Mr. Yanukovich’s party. The bloc has been banned since the Russian invasion in February.

Yet, appointed by President Volodymyr Zelensky as the head of the civil-military administration in his region, Mr. Lyakh insists there is no question of his loyalty to Ukraine.

Other residents of Sloviansk, however, revealed deeply conflicted views in conversations. Many residents lived through the period under the separatist government in 2014 and said they could do so again.

Russian rule would be no better or worse than Ukrainian, said anotherman who gave his name as Serhii. “It was at least stable,” he said, sitting outside the only working supermarket in town. “They rounded up the drunks and the drug addicts.”

Firefighters extinguished a blaze after a rocket attack on a market area in Sloviansk earlier this week. The unit’s leader dismissed conspiracy theories blaming Ukraine for the attack.
The remains of a house hit by shelling in Sloviansk.

Tetiana, a dance teacher and choreographer whose husband is in the Ukrainian Army, runs a collection center for supplies donated for the military. She said it was hurtful to see videos of residents in Russian-held areas complaining that they had gone hungry before the arrival of Russian troops, when Ukrainian soldiers had risked their lives to ferry in humanitarian aid.

“I love this city so much,” she said, “but some people are not worth the deaths of our soldiers.”

Yet, for most in Sloviansk, the issues are not black and white, but often just confusing.

Oleksandr Feodotov, 49, was working as a porter in the market when the volley of rockets exploded there on Tuesday. “Of course it’s dangerous,” he said. But he said he did not want to leave, because people from eastern Ukraine suffered discrimination in central and western Ukraine.

“Everyone in the west looks down on those from the east,” he said. “They behave badly toward us. They say the war started because of us.” People were telling the refugees to leave and landlords were charging high rents, he said.

Nevertheless, he said he would leave before a Russian takeover. “If the Russians come I will not stay one day,” he said.

Nina and Hennady Kononenko, who narrowly escaped with their lives when a rocket exploded beside their house Tuesday, blowing a hole in their kitchen wall and roof, said they would not be leaving. They were both in their 70s, and did not have the strength to move, Ms. Kononenko said. She is ethnic Russian and her husband is Ukrainian, and she quietly shushed him when he blurted out anti-Ukrainian conspiracy theories he said he had seen on YouTube.

Further down the street, Mikhail, 35, was retrieving belongings from the debris of his girlfriend’s house, which had also been hit by a rocket. “Whoever is firing, it should not be this way. It’s not human,” he said. “Fire in the fields, fight somewhere out there, but not over the heads of civilians. It is not right.”

And he voiced a thought that is not often heard elsewhere in Ukraine.

“We should have negotiated,” he said. “We should have made concessions on both sides, because it won’t lead to anything good. We have to agree, somehow, but we have to. Let there be big financial losses, or some other international relations, but we must find an agreement. We live in the 21st century.”

A Russian rocket blew a hole in the house of Nina and Hennady Kononenko, but they say they don’t have the strength to evacuate.

Tags
Residents Rocket That This Ukraine

Russia’s foreign minister is shunned, but not by all, at a G20 gathering.