JERUSALEM — In life, Shireen Abu Akleh, an acclaimed Palestinian American broadcaster, was one of the leading chroniclers of the Israeli-Palestinian conflict.

Her death, while covering an Israeli raid in the occupied West Bank on Wednesday, turned her into one of the conflict’s most prominent recent victims. Palestinian witnesses and officials said Ms. Abu Akleh, 51, long a familiar face on the Al Jazeera network, was shot by Israeli soldiers, though Israeli officials said she could have been struck by either Palestinian or Israeli fire.

Then, on Friday in Jerusalem, her funeral was marred by another burst of violence. And as with her death, it was marked by clashing narratives.

Early on Friday afternoon, as thousands of people massed in East Jerusalem for one of the largest Palestinian funerals in recent memory, a phalanx of Israeli riot police assaulted a group of mourners carrying the coffin containing Ms. Abu Akleh’s body, causing them to almost drop it.

The Israeli police later said they had intervened because the mourners, who wanted to carry the coffin by foot to the funeral, had refused to put it in a hearse, an arrangement the police said had previously been agreed to with Ms. Abu Akleh’s family.

But the police intervention drew shock and condemnation both in Israel and beyond, with the assault on mourners regarded as egregious regardless of its motive.

It was the latest and perhaps most startling salvo of the most violent period in Israel and the occupied territories, outside of full-scale war, in several years.

The assault occurred outside a hospital in East Jerusalem, where Ms. Abu Akleh’s body had been kept since another memorial on Thursday, and where hundreds had gathered to witness the start of her funeral cortege.

Tensions arose between Palestinians and Israeli police officers after the Palestinians began waving Palestinian flags and chanting nationalist slogans. They escalated after the police refused to allow mourners to take the coffin on their shoulders to the church, according to Sven Kühn von Burgsdorff, a senior foreign diplomat who witnessed the dispute.

That prompted a standoff between mourners, who would not allow the hearse to approach the hospital, and the police, who refused to let them leave with the coffin, Mr. Kühn von Burgsdorff said. 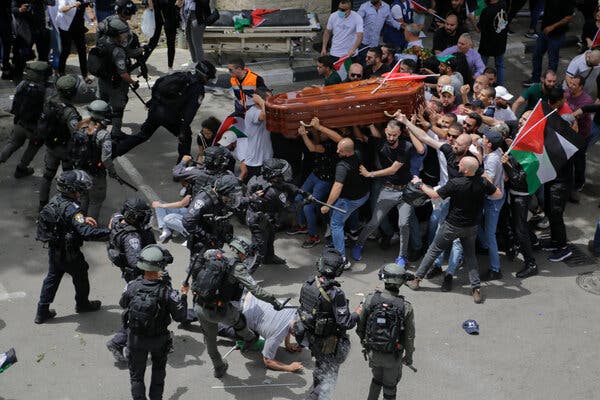 At the White House, the press secretary Jen Psaki described video footage of the clash as “deeply disturbing” and said, “We regret the intrusion into what should have been a peaceful procession.”

Israel’s regional cooperation minister, Esawi Frej, one of the first Arabs to serve as an Israeli minister, said on Twitter that the police force had “desecrated” Ms. Abu Akleh’s memory and funeral, producing “a needless flare-up.” He added: “The police showed zero respect for the mourners and zero understanding of its role as the organization that is responsible for maintaining order, not its violation.”

As the standoff escalated, Mr. Kühn von Burgsdorff, the European Union envoy to the Palestinians, tried to mediate between the police and the mourners, he said. Realizing it was impossible to persuade the police to change their mind, Ms. Abu Akleh’s brother, Anton, also asked the mourners to put the coffin in the hearse, Mr. Kühn von Burgsdorff added.

But neither side would back down, as the mourners held onto the coffin and waved Palestinian flags against the demands of the police. East Jerusalem is mostly populated by Palestinians, and most of the world views it as occupied territory — but Israel has annexed the area, considers it part of its capital, and often prevents expressions of Palestinian nationalism there.

After warning the crowd to stop chanting, unsuccessfully, and after three plastic bottles were thrown in the direction of the police, the police abruptly surged toward the mourners, video showed.

An occasion intended as a moment of catharsis had instead descended into chaos — compounding the indignity and the pain that, to many Palestinians, Ms. Abu Akleh’s death had embodied.

Ms. Abu Akleh had been shot dead early on Wednesday morning, during an Israeli raid on Jenin, a city in the northern West Bank that is home to several perpetrators of recent deadly attacks on Israelis, and which has been the focus of a recent Israeli counterterrorism campaign.

The Palestinian Authority’s public prosecutor, in a report released Friday night, concluded Ms. Abu Akleh had been shot deliberately by Israeli forces. The prosecutors said they based their findings on an autopsy that concluded she had been shot in the head, bullet marks on a tree next to where she was killed and interviews with witnesses, including another Al Jazeera journalist who was shot in the back.

The Israeli Army had released its own preliminary findings into her death just hours earlier, concluding that it was “not possible to unequivocally determine the source of the gunfire which hit and killed Ms. Abu Akleh.”

But for the first time, the Israeli Army also used the report to set out a scenario in which Israeli forces might have hit Ms. Abu Akleh.

The Israeli Army said it would likely need to assess the bullet that killed Ms. Abu Akleh in order to draw a more certain conclusion. The Palestinian Authority, which manages the part of the West Bank where the raid occurred, has possession of the bullet and has refused Israeli requests to assess it in an Israeli laboratory, under joint American and Palestinian supervision.

The confrontation on Friday capped an unusually tense and tumultuous two-month period that has seen 19 Israelis and foreigners killed in five separate Arab attacks in Israel; more than 30 Palestinians killed in the West Bank, mostly in counter raids by the Israeli Army; a spasm of violence at the holiest site in Jerusalem; a new round of rocket fire from Gaza; and the first overlap between Ramadan, Passover and Easter in a generation.

Ms. Abu Akleh had covered such conflict for more than two decades, first making her name as a journalist amid the Palestinian uprising known as the second intifada, which convulsed Israel and the occupied territories from 2000 to 2005.

She had originally studied to be an architect but ultimately chose journalism “to be close to the people,” she said in a short reel shared by Al Jazeera soon after she was killed on Wednesday. “It might not be easy to change the reality, but at least I was able to bring their voice to the world.”

In a 2017 interview with the Palestinian television channel An-Najah NBC, she was asked whether she was ever afraid of being shot.

“We don’t throw ourselves to death,” she said. “We go and we try to find where we can stand and how to protect the team with me before I think about how I am going to go up on the screen and what I am going to say.”

After the attack on the mourners, her coffin was eventually placed in a hearse and driven to an entrance to the Old City of Jerusalem. Thousands of Palestinians had crammed into the alleys leading to the Cathedral of the Annunciation of the Virgin, where her funeral took place.

Her coffin was carried there on foot.

Tags
Had Jerusalem Sai̇d She That