SIX NATIONS OF THE GRAND RIVER, Ontario — The police officers and members of the Mohawk community worked together — pushing two ground-penetrating radar devices resembling electric lawn mowers as they searched for human remains at the site of a former Indigenous boarding school.

Roland Martin, 84 — who had been forced to attend the school, the Mohawk Institute, in 1947 — was watching, and remembering. He recalled that food was so scarce that he and classmates scavenged at a nearby dump for scraps. “Sometimes you have to wonder how we made it through,” he said. “How many people actually did die here?”

Searches for the remains of Indigenous children who died while at Canada’s notorious residential schools have been taking place throughout the country since May. That was when radar scans of the Kamloops Indian Residential School grounds in British Columbia found evidence of 215 human remains buried in unmarked graves, many of them children.

But this search was different.

While most Indigenous communities have been reluctant to work with the police because of a deep distrust of law enforcement, the Mohawk have entered a delicate collaboration with two police forces. Their hope is that by involving law enforcement, they can preserve the option of a formal criminal investigation into any unmarked grave sites — and to obtain justice, as well as to find out the truth of what happened. 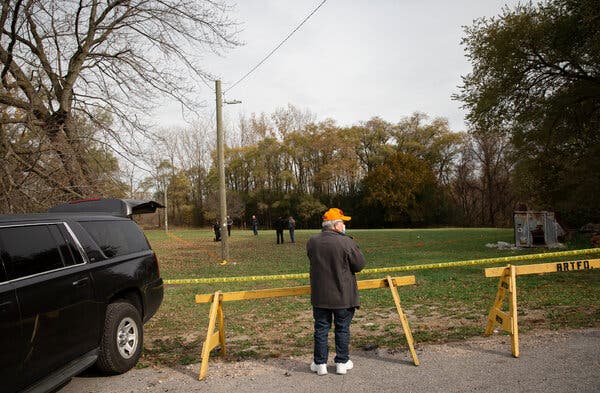 “We recognized that we had to be very cautious because of those trust issues with police,” said Chief Mark B. Hill of the Six Nations of the Grand River reserve, a portion of which contains the school grounds. “Survivors are very on edge about everything, right?”

From the 1880s through the 1990s, the Canadian government forcibly removed at least 150,000 ​Indigenous children from their homes and sent ​them t​o residential schools to assimilate them into Western ways. ​Their languages, religious and cultural practices were banned. In 2015, a ​National Truth and Reconciliation Commission ​called the system “cultural genocide.”

At the schools, which were mostly run for the government by Christian churches, sexual, physical and emotional abuse and violence were commonplace. Thousands of children went missing.

A memorial made up of children’s shoes and toys at the former school in Brantford, Ontario.Credit…Tara Walton for The New York Times

Many Indigenous leaders say the remains being discovered across Canada are the manifestation of criminal activity at the schools ranging from improper burial to neglect and murder.

The national commission found records indicating that at least 54 students died at the Mohawk Institute, which was one of the oldest and longest running schools in the system when it finally closed in 1970.

Still, they have been wary of allowing police officers to investigate the deaths because, as RoseAnne Archibald, the national chief of the Assembly of First Nations, and other leaders, say, they were an integral part of the system. Officers tore Indigenous children from their homes, and delivered them to the schools. They also tracked down runaways from the schools and brought them back.

“There must be an examination to determine if some of our children were murdered,” Chief Archibald said last month at Kamloops when she called on the United Nations to appoint an independent investigator. “Canada must be held accountable for their genocidal laws and policies. Canada must not be allowed to investigate itself.”

Compounding this sense of distrust is a documented history of racist abuse of Indigenous people by police officers, particularly from the Royal Canadian Mounted Police, as well as a tendency among police officers to overlook or downplay crimes against them.

So the decision to involve law enforcement in the search for remains at the Mohawk Institute was not an easy one for the Mohawk community to make.

Chief Mark B. Hill of Six Nations in November.Credit…Tara Walton for The New York Times

Like many reserves in Ontario and Quebec, Six Nations has its own police force. While that force is one of the few staffed entirely by Indigenous officers — most of whom have relatives who attended the school — it lacks the personnel, forensic skills, budgets and other resources to carry out the search, and any criminal investigation, on its own.

“We need the assistance,” Chief Hill said. “We are already under capacity, underfunded at Six Nations Police.”

Chief Hill said that after the findings at the Kamloops school, he met with former institute students, or survivors as they prefer to be known, for guidance on whether their community should involve the Ontario Provincial Police, and if so, how.

That force had recently been locked in a sometimes tense standoff with several Mohawks from Six Nations who were trying to halt a construction project on land deeded to them by Britain in 1784.

And in 2007, an inquiry criticized the provincial police for shooting and killing Dudley George, a 38-year-old Ojibwa man during a protest over the ownership of land that had been seized from his community and eventually turned into a park.

But many survivors said it was important to determine how the students died and who was responsible, if anyone, even if it is likely that any perpetrators have died or are no longer mentally fit to stand trial under Canadian law.

The Truth and Reconciliation Commission found records indicating that at least 54 students died at the Mohawk Institute, which was opened by a British missionary group in 1828 and operated until 1970. Credit…Tara Walton for The New York Times

“They said, ‘If these were white kids, there would be police on the ground immediately,’” Kimberly R. Murray, a lawyer and the former executive director of the national commission, recalled of her initial conversations with the institute’s survivors.

The survivors also said the students who died deserved at least the dignity of having their graves located.

So the Mohawks determined to seek the help of the provincial police, as well as of the police department in Brantford, Ontario, the city that surrounds the former school and that neighbors the main part of the Six Nations’ land.

But to address the community’s mistrust of the provincial police and other government bodies, Six Nations’ band council established a “survivors’ secretariat” run by Ms. Murray, a member of the Kanesatake Mohawk Nation near Montreal. That group has the final say over all matters related to the grounds search.

The provincial police called the collaboration a “community-led search for grave sites” in a statement to The New York Times and said it would offer their support by “laying out a grid pattern for the area and conducting aerial photography” and assigning a case manager to assist.

The two systems are “working together: traditional knowledge and colonial tools,” Ms. Murray said on the morning the search began. “Community search teams have the knowledge, they have the skills. Police just need to know how to work with them.”

One of Ms. Murray’s first actions was to appoint Beverly Jacobs, a Mohawk and law school professor, to oversee the police work from a human rights perspective, and other monitors to ensure that the search and investigation comply with cultural practices.

Police barriers at the schools grounds. Ms. Murray said she didn’t know if any criminal prosecutions will come out of the search, and if any did, they would likely be years in the futureCredit…Tara Walton for The New York Times

Ms. Murray said that any criminal prosecutions to come out of the search would likely be years in the future. The search itself could take years, since the institute also operated a 500-acre farm and the school’s complete records have been hard to obtain.

Another issue is whether the Six Nations will decide to exhume remains to identify them through D.N.A. tests and determine cause of death — a prelude to holding anyone accountable in court. The question of whether to exhume remains has been divisive in many Indigenous communities.

The only other Indigenous community where the police are known to be investigating missing residential school children is in Manitoba, where an R.C.M.P. investigation that began in 2010 has yet to produce any charges.

The day that Mr. Martin watched the police search the grounds, Geronimo Henry, another survivor, walked the property and found where he’d scratched his nickname, Fish, into one of its red bricks. Mr. Henry spent 11 years at the school after arriving as a 6-year-old in 1942.

“With the radar, searching for unmarked graves, it’s part of the truth and reconciliation,” he said. “The natives are telling the truth. Now it’s up to the government to try to reconcile with all the wrongs.”

A Controversy Lingers, but a Driver Holds Firm: ‘We Won It on Track’