ERBIL, Iraq — It was cold in Belarus, bitterly cold, but at least it offered hope, however illusory.

Nazar Shamsaldin was one of thousands of Iraqis who made their way to the Eastern European country in recent months, hoping it would prove a jumping-off point to new lives in the West, only to become pawns in a geopolitical game.

But this weekend he was back in Iraq, sitting on the cold floor of a tiny unfinished concrete house, newly deported from Belarus. Nearby a small boy, one of a dozen children crammed into the house, was trying to warm his hands over a single, battered kerosene heater.

Mr. Shamsaldin, a laborer, and 35 of his relatives had risked everything to travel West. Like many of the hundreds of other Iraqis deported last week, they are now deep in debt and despair.

The Iraqis are at the heart of a crisis that erupted after Belarus loosened its visa rules this summer, luring migrants but then pushing them across borders to punish the European Union for imposing sanctions against the autocratic Belarusian president.

Once in Belarus, many of the migrant families were abandoned in deep forests with no shelter, food or water, sometimes thrust into dangerous confrontations as they tried to make it into Poland, Lithuania or Latvia, all members of the European Union.

A Polish forest near the border with  Belarus last week.Credit…Maciek Nabrdalik for The New York Times

“A Belarusian police officer pointed a pistol at my head, so I had to go back to Lithuania,” said Mr. Shamsaldin, 24, who had three small children with him. “In Lithuania, the commandos had guns pointed at me and told me, ‘If you don’t go back, we will kill you.’”

He got the message.

On Thursday, Mr. Shamsaldin returned with his family on an Iraqi Airways flight evacuating 431 migrants from Minsk, the capital of Belarus.

Several thousand other migrants remain in Belarus near the border. They are mostly Iraqi Kurds, like Mr. Shamsaldin, as well as Iraqi Arabs, Syrians, Yemenis and even some Cubans.But with their usefulness to Belarus diminished, the now-penniless Iraqi migrants are now being deported.

Most are traumatized. Some have lingering injuries.

“The Belarusians beat us with sticks, but the Lithuanians attacked us with sticks and tasers,” said Dhiab Zaydan, a cousin of Mr. Shamsaldin’s. Mr. Zaydan, 30, had a large bandage around his leg where, he said, he was beaten with night sticks. Photographs showed his entire side to be a deep purple, which he attributed to electric shocks.

Dhiab Zaydan says he was beaten by border guards in Lithuania.Credit…Hawre Khalid for The New York Times

Reports of assaults at the border are common.

“People have been beaten up, and they are in distress,” said Safeen Dizayee, head of the Foreign Relations Department of the semiautonomous Kurdistan Regional Government. “We have told these authorities that they should be treated humanely and, at least until this problem is resolved, they should be treated like normal human beings with some kind of shelter or some food.”

For many of the migrants, it was not their first attempt to leave. Mr. Shamsaldin had been trying to get to Germany, where he spent six months in 2015 before returning to Iraq to care for his sick father.

“Germany is the only country where we have experienced human rights,” he said.

Mr. Shamsaldin said that after walking for two days, he and his relatives were captured by the Belarusian police, pushed into the back of a military truck and driven to the Lithuanian border. There, they were told to cross the fence.

Video shows Mr. Zaydan walking with his family in Lithuania along the Belarus border before being deported, like hundreds of other Iraqi migrants. 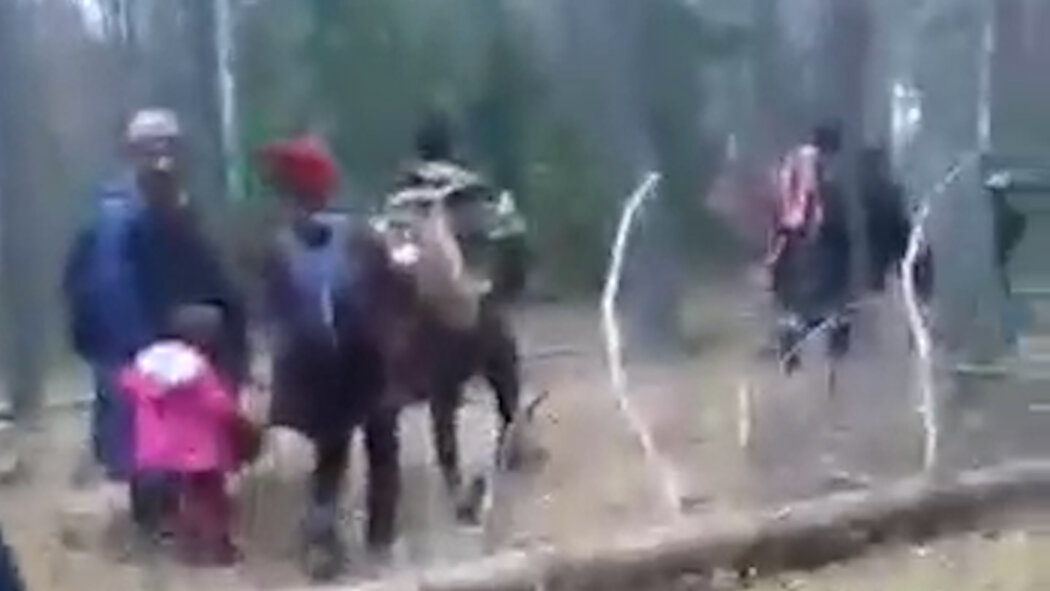 Video shows Mr. Zaydan walking with his family in Lithuania along the Belarus border before being deported, like hundreds of other Iraqi migrants.CreditCredit…Zedan Jameel

Once they were in Lithuania, an aid organization gave them bread and water, and medical staff assessed any injuries while a cameraman filmed the operation, they recounted. Mr. Shamsaldin’s 2-month-old son was taken to a hospital to be treated for exposure.

But once the aid organization and the cameras left, Lithuanian soldiers started using sticks and tasers, the Kurds said, trying to drive them back over the border.

Mr. Shamsaldin said he reprimanded one Lithuanian officer, telling him, “‘You destroyed our country, and now we are coming to you, and you don’t have any humanity.’”

The reference was to the American-led invasion of Iraq in 2003, but the Lithuanian was quick to offer a correction. “That was Poland,” he replied.

While Lithuania provided support during the United States occupation, Poland was part of the invading force.

Mr. Shamsaldin said hesold his car to pay $11,000 for airfare and visas for his wife and three children, which he said were issued by a Belarus travel agency. After they were stranded in the forest in Belarus, he said, a Belarusian soldier in civilian clothes demanded their last $3,000 to drive them back to Minsk.

Mr. Zaydan and his family at his cousin’s home in Erbil on Sunday.Credit…Hawre Khalid for The New York Times

His cousins, most of whom make $10 a day working in construction, borrowed tens of thousands of dollars and now cannot pay rent. More than a dozen children were crammed into the only living area of the two-room house. None go to school, their families unable to afford the transportation fees of about $20 per month per child.

On Thursday, another family deported from Belarus sat on the sidewalk outside the air terminal in Erbil, the capital of Iraqi Kurdistan, dazed and silent and unable even to come up with the taxi fare to return to the camp for displaced Iraqis where they had been living. They were Yazidis, members of a religious minority, many of whom still languish in camps seven years after the Islamic State began a campaign of genocide against them.

One of the Yazidis, Naam Khalo, 56, said she, her son and her daughter-in-law had spent 24 nights in the deep forest, only to be sent back to Belarus each time they made it across the border.

To raise the $20,000 needed for the trip, Ms. Khalo said, she borrowed money and sold her gold jewelry.

“Now we don’t have anything,” she said.

In a middle-class neighborhood of Erbil, Yadgar Hussein described her own tortuous journey, which led to her deportation from Poland three weeks earlier with her children. In October, they had waded through stream of sewage, she said, and walked through the forest for days in freezing temperatures after the Belarusian police cut the border fence. But once in Poland, a driver led them into a police checkpoint, where they were arrested, with her 19-year-old son and another migrant hiding in the trunk of the car.

Yadgar Hussein and her sons in Erbil after being expelled from Poland.Credit…Hawre Khalid for The New York Times

She still cannot sleep, she said.

“The only thing I know is my life is destroyed,” said Ms. Hussein, who was married at 14 and widowed four years later when her husband stepped on a land mine. She is divorced from the father of her three youngest children.

Ms. Hussein says she has not given up on leaving Erbil again, perhaps next time by the perilous sea crossing from Turkey to Greece.

“If I had money, I would go by sea tomorrow for the sake of my children,” she said. “Either you die or you make it there. But nobody gets arrested.”

Tags
Back Belarus Had Sai̇d She

Manchester United and the Perils of Living in the Past