KABUL, Afghanistan — A young Taliban fighter with a pair of handcuffs dangling from his finger warily watched the stream of approaching cars as he stood in front of a set of steel barricades.

Friday prayers would begin soon at the Sakhi Shah-e Mardan shrine and mosque, a holy Shiite site in central Kabul that he was guarding.

There had been two bombings of Shiite mosques in Afghanistan by the Islamic State in recent months, killing dozens, and this 18-year-old Taliban fighter, Mohammad Khalid Omer, wasn’t taking any chances.

He and his police unit of five other fighters, colloquially known as the Sakhi unit after the shrine they defend, represents the Taliban’s vanguard in their newest struggle after the group’s stunning takeover of the country in August: They won the war, but can they secure the peace in a multiethnic country racked by more than 40 years of violence?

Journalists from The New York Times spent 12 days with the small Taliban unit this fall, going on several patrols with them in their zone, Police District 3, and traveling to their homes in Wardak Province, a neighboring mountainous area. 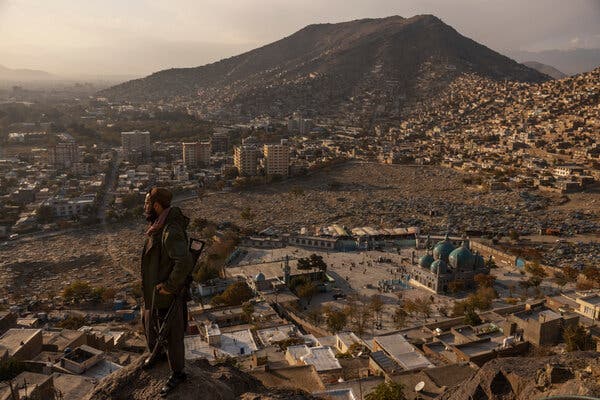 Hekmatullah Sahel, a Talib assigned to Kabul’s Police District 3, in the hills above the Sakhi Shah-e Mardan shrine and mosque, which his unit is charged with protecting.

Members of the police unit talking with local residents near the shrine.
Inside the Sakhi shrine, a Shiite holy site.

So far, the new government’s approach to policing has been ad hoc at best: Local Taliban units have assumed the role at checkpoints across the country, while in large cities, such as Kabul, Taliban fighters have been imported from surrounding provinces.

Even with only half a dozen members, the Sakhi unit offers a telling snapshot of the Taliban, both in terms of who their core fighters are and what the biggest challenge is for them as Afghanistan’s new rulers: Once a mainly rural insurgency, the movement is now being forced to contend with governing and securing the unfamiliar urban centers it had been kept out of for decades.

No longer are fighters like Mr. Omer sleeping under the stars, avoiding airstrikes and planning ambushes against foreign troops or the Western-backed Afghan government.

Instead, they are wrestling with the same economic hardships gripping their countrymen, with the same threat of Islamic State attacks and with the raucous, puzzling, winding streets and back alleys of Kabul, a city of about 4.5 million people that they are practically strangers to.

The Sakhi unit lives full time next to the shrine in a small concrete room painted bright green with a single electric heater. Steel bunk beds line the walls. The only decoration is a single poster of the sacred Kaaba in Mecca.

Members of the Taliban police unit at their cramped living quarters.
Dinner in their quarters.
The unit had a single electric heater for the cold autumn nights. Their phones are the focus of much of their downtime.

In Afghanistan, many Shiites belong to the Hazara ethnic minority; the Taliban, a Sunni Pashtun movement, severely persecuted Hazaras the last time they ruled the country. But the seeming implausibility of a Talib unit actually guarding such an emblematic Shiite site is belied by how seriously the men appeared to take their assignment.

“We do not care which ethnic group we serve, our goal is to serve and provide security for Afghans,” said Habib Rahman Inqayad, 25, the unit leader and most experienced of them. “We never think that these people are Pashtun or Hazara.”

But Mr. Inqayad’s sentiments contrast with the Taliban’s interim government, composed almost entirely of Pashtun hard-liners who are emblematic of the movement’s harsh rule in the 1990s, and who are perceived as anti-Hazara.

As he spoke in the unit’s cramped barracks, a small speaker often played “taranas,” the spoken prayer songs, without musical accompaniment, popular with the Talibs.

One of the group’s favorites was a song about losing one’s comrades, and the tragedy of youth lost. In a high thin voice, the singer intones, “O death, you break and kill our hearts.”

On a fall day last year as the Sakhi unit looked on, families gathered on the tiled terraces around the shrine, drinking tea and sharing food.

Some cautiously eyed the Talibs patrolling the site, and one group of young men rushed to put out their cigarettes as they approached. The Taliban generally frown on smoking, and the unit has at times physically punished smokers.

Mr. Sahel guarding the shrine.
From left, the Taliban fighters Habib Rahman Inqayad, Mr. Sahel and Mr. Omer at the shrine with a young visitor.
Mr. Omer watching over a road near the shrine.

Another day, two teenage boys came to the shrine, brazenly strolling with their two girlfriends. They were confronted by the Sakhi unit, who asked what they were doing. Unsatisfied with their answers, the Talibs dragged the boys into their bunk room to answer for the transgression. In conservative Afghanistan, such public consorting is taboo, doubly so in a holy site under Taliban guard.

Inside their room, there was an argument among the Sakhi unit about how to handle the two boys: good cop versus bad cop. Hekmatullah Sahel, one of the more experienced members of the unit, disagreed with his comrades. He pushed for a verbal lashing rather than a physical one. He was overruled.

When the teenagers were finally allowed to leave, shaken by the beating they had just received, Mr. Sahel called out to the boys, telling them to come back again — but without their girlfriends.

The episode was a reminder to the shrine’s visitors that the Taliban fighters, while generally friendly, could still revert to the tactics that defined their religious hard-line rule in the 1990s.

For the group of six fighters, contending with flirting teenagers was just another indicator that their days of fighting a guerrilla war were over. Now they spend their time preoccupied by more quotidian policing considerations, like spotting possible bootleggers (alcohol in Afghanistan is banned), finding fuel for their unit’s pickup and wondering whether their commander will grant them leave for the weekend.

Mr. Omer had joined the unit only months before. “I joined the Islamic Emirate because I had a great desire to serve my religion and country,” he said.

But to some Talibs, Mr. Omer is what is derisively called a “21-er” — a fighter who only joined the movement in 2021, as victory loomed. This new generation of Talibs bring new expectations with them, chief among them the desire for a salary.

They and most other rank-and-file fighters have never received a salary from the movement. Despite seizing billions in American-supplied weapons and matériel, the Taliban are still far from being well equipped. Fighters are dependent on their commanders for basic supplies, and they have to scrounge for anything extra.

Mr. Sahel, at 28, is older than most of his comrades, slower to excite and more restrained. He spent four years studying at a university, working the whole time as a clandestine operative for the movement. “None of my classmates knew that I was in the Taliban,” he said. He graduated with a degree in physics and math education, but returned to the fight.

Relieved the war is over, he and his comrades still miss the sense of purpose it provided. “We are happy that our country was liberated and we are currently living in peace,” he said, but added, “we are very sad for our friends who were martyred.”

Mr. Inqayad in the unit’s patrol vehicle on the streets of Kabul.
Mr. Inqayad admiring a Taliban patch he acquired at the main military goods mall in Kabul, which used to be known as the Bush Bazaar, after the U.S. president, and has since been renamed the Mujahideen Bazaar. Wearing such a patch could have gotten him killed if spotted by the troops of the former Afghan government.
A member of the unit cleaning his weapon.

Every few weeks, the men are allowed to visit their families back in Wardak for two days. On a crisp morning in November, Mr. Inqayad sat in his home in the Masjid Gardena valley, a beautiful collection of orchards and fields hemmed in by mountain peaks.

Mr. Inqayad attended school until the seventh grade, but had to drop out. Religious studies filled in some gaps. He joined the Taliban at 15.

Recently married, he faces new challenges now that the movement is in power. The only potential breadwinner in his family, he needs a salary to support his wife, mother and sisters, but so far he has not been drawing one.

Mr. Inqayad back home in Wardak Province, greeting a group of boys whose fathers were Taliban fighters who were killed in the war, as his was.
Mr. Omer, left, reaching out to his 1-year-old sister at his family home in Qurbani village in the Chak District of Wardak Province.
Mr. Inqayad’s father, Mullah Gul-Wali, top right, was a Talib in the previous regime. He was killed fighting in the northern province of Balkh during the U.S. invasion in 2001, when his son was just 4.

Back in Kabul, the Sakhi unit loaded up for a night patrol, bundling up to combat the cold wind that blows incessantly from the mountains ringing the city.

Mr. Omer rode in the bed of the unit’s truck, a machine gun resting on his lap and bands of ammunition wrapped around his neck like party beads.

But there was little to warrant the heavy weaponry meant for suppressing enemy troops. Their area of responsibility was quiet, and the men seemed bored as they spun around the city as packs of street dogs chased and snapped at the tires of passing cars.

Mr. Inqayad in Wardak visiting the hilltop grave of his uncle, Gul Rahman, a Talib who was killed in fighting four years ago.“We will never forget our memories of the war or our friends from that time,” he said. “Every time that I remember him, I miss him a lot.”

Tags
Omer Tali̇ban That Unit Who

Clad in a Kimono, a Painter of Warriors Returns to Downtown New York