Lava from a volcanic eruption on La Palma, one of the Spanish Canary Islands, spread a path of havoc on Wednesday, destroying hundreds of homes, forcing the evacuation of thousands of people and prompting warnings of toxic explosions.

The eruption on La Palma — the first major one there in 50 years — began Sunday, and some experts warned that lava might continue to spew for weeks.

About 320 houses on the island off northwestern Africa had been engulfed by fire and lava by Wednesday morning, some 6,000 residents have been evacuated, and a few hundred other homes remain at risk, according to the local authorities. Despite the widespread destruction, there have been no reports of deaths or injuries so far.

“We have always lived here fearing an eruption,” said Antonio Rodríguez Acosta, a retired schoolteacher who lives close to the village of Todoque and was evacuated on Sunday.

His house has been spared by the lava flow so far, he said, but he has lost a small vineyard nearby.

“This is a complete disaster,” he said. “It is one thing knowing that it could happen one day, and another to have to suddenly live through this.”

Firefighters and other emergency workers were scrambling on Wednesday to excavate a ravine to divert lava away from Todoque.

Arnau Folch, a volcanologist at the Spanish National Research Council, said, “The main uncertainty is how long this will last.”

But Mr. Folch noted that a 1971 eruption lasted about three weeks.

“It seems that what is happening now will resemble pretty closely what happened 50 years ago,” he said.

One major danger, Mr. Folch said, is from powerful blasts that might be set of if the lava flow reaches the ocean. As the water expands explosively into jets of steam, it can fragment the lava into exceptionally fine-grained ash. Another concern is the possible release of toxic gases from reactions between the lava and the seawater.

La Palma is one of the smaller and least-populated Canary Islands, which also include Lanzarote and Tenerife, well-established tourism destinations.

Given that the archipelago sits on a volcanic hot spot, the islands are closely monitored by scientists, who have set up several stations to analyze earthquakes.

La Palma has been under especially close scrutiny since 2017, when seismic activity intensified there — telltale signs that an eruption may occur. This month, scientists issued warnings after recording thousands of small quakes. The tremors, and images of the eruption, have also been recorded by the European Union’s observation satellite program, Copernicus. 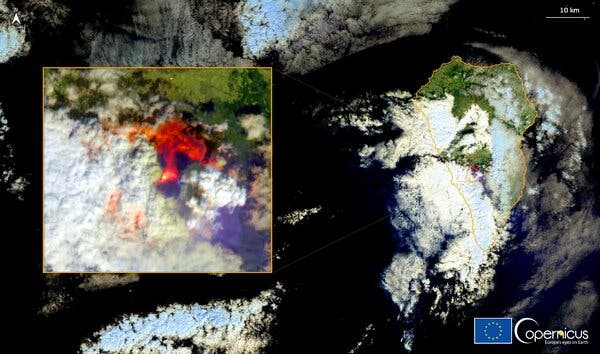 A satellite image showing the spread of the lava on Monday.Credit…European Union’s Earth Observation Programme, via EPA

The geology of the Canary Islands allows lava and gases to escape from fissures, which can result in eruptions of various intensity and in various locations. The eruption Sunday was followed by the opening of another vent two days later, which in turn induced more earthquakes.

Since Tuesday, the lava’s advance toward the ocean has been slowed by flatter terrain, but the local authorities declared a two-nautical-mile exclusion zone in the waters around the island in case volcanic activity sets off underwater explosions that could threaten shipping.

Lava tumbling down a mountainside into an irrigation pool on Monday.Credit…Europa Press, via Associated Press

Scientists say it is too early to whether more eruptions could occur and how much more lava might be released.

Thousand have been evacuated as the fiery mass of lava creeps across the island.Credit…Agence France-Presse — Getty Images

Héctor Lamolda Ordóñez, an earth sciences engineer who teaches at the Complutense University in Madrid, said the eruption was still in its first phase, during which new vents can appear while others get plugged. Eventually, “activity is likely to be concentrated in just a few vents,” he said.

On Tuesday and Wednesday, inhabitants of some of the evacuated hamlets and villages close to the national park where the volcano is located, Cumbre Vieja, were permitted to return to their homes under close supervision from the emergency services to salvage personal belongings.

Hundreds of houses have been engulfed by fire and lava, and hundreds more are considered at risk.Credit…Borja Suarez/Reuters

But others were urged to keep their distance.

Tourists, at least initially, got a more mixed message.

The Spanish tourism minister, Reyes Maroto, was forced to walk back comments made in a radio interview suggesting that the eruption could be “an attraction” for visitors who might “enjoy what nature has brought to La Palma.” After a backlash, Ms. Maroto said the priority was helping the thousands of islanders affected.

Inhabitants of some areas were permitted to return home to salvage personal belongings.Credit…Ramon De La Rocha/EPA, via Shutterstock
Scientists say that it is too early to say whether more eruptions could occur on La Palma and how much more lava will be released. Credit…Alfonso Escalero/iLoveTheWorld, via Associated Press

Veronika Siewers, who operates a scuba diving club at the southern end of La Palma, said she had already had a slew of canceled bookings.

“I’m getting calls every hour from people asking whether or not they can still come, and I honestly don’t know what to tell them,” she said.

The Canary Islands sit on a volcanic hot spot, and are closely monitored by scientists.Credit…Kike Rincon/Europa Press, via Associated Press
Tags
Can La Palma Lava One Sai̇d

In Argentina, a Political Marriage of Convenience Comes Undone

Review: With Balanchine and Confetti, City Ballet Is Back