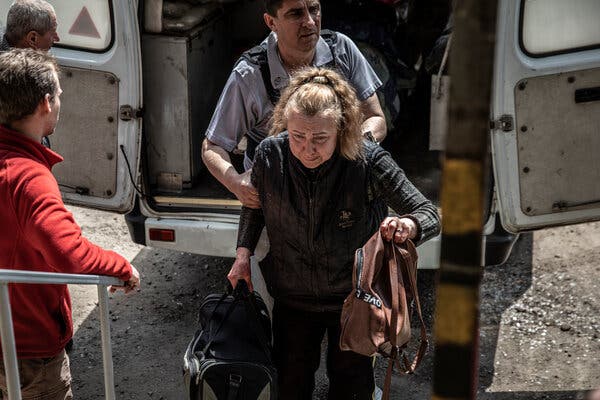 Olha, a resident of Sievierodonetsk, climbing down from the ambulance that was carrying her husband on Tuesday.Credit…Finbarr O’Reilly for The New York Times

SIEVIERODONETSK, Ukraine — The eastern Ukrainian town of Sievierodonetsk was flanked on three sides by Russian forces and panic was in the air.

“Please God let him live,” one woman wailed as she climbed down from an ambulance bearing her husband, her hands covered in blood. “You cannot imagine what a person he is. He is a golden person.”

Police medics drew the woman, who gave her name as Olha, inside their first aid post as she appealed for help for her husband who lay in the ambulance.

But the stretcher bearers were already standing down. Her husband, Serhii, had died, the latest victim of the relentless barrage of artillery and gunfire Russian forces have rained down on the city, one of the last major Ukrainian strongholds in the region.

Russia is trying to encircle and lay siege to the city, a mining and industrial town that is critical to controlling the Donbas region — a major objective.

When a New York Times reporting team visited Sievierodonetsk on Tuesday, we drove through small villages and fields to avoid Russian shelling and sped across the single lane bridge that is the only remaining route in.

Debris from the bombardment could be seen on almost every street. The fins of rockets stuck out of craters in the asphalt. A broken electricity pylon and cables were draped across the streets, and burned-out cars, shredded by shrapnel, lay abandoned wherever a blast had thrown them — some on sidewalks or overturned. A truck hung precariously off the side of the bridge.

Advancing Russian forces have destroyed the main bridge into town and repeatedly targeted a second. They have also come close to cutting off the main highway into the town from the south, and fire on vehicles using the road, making travel perilous. Several mortar shells hit close to the main bridge on Tuesday.

Apple Store Showdown: Inside the Battle for Union Representation

Your Wednesday Briefing: Calls to Free Up Ukraine’s Grain Exports

Cassidy Hutchinson Did Her Job