LONDON — A police officer found guilty of the murder of Sarah Everard in London earlier this year used the false pretense that she was violating Covid-19 regulations to abduct her before he raped and killed her, a prosecutor told a London courtroom on Wednesday.

Her abduction and murder in March galvanized a national movement demanding better protections for women, but the harrowing details of how the officer, Wayne Couzens, used his official police credentials, equipment and training to carry out the crime were detailed publicly for the first time during his sentencing hearing.

When Ms. Everard was abducted on March 3, Britain was in the midst of a national lockdown because of the coronavirus pandemic. People’s movements were restricted and the regulations were often enforced by the local police.

Tom Little, a prosecutor, described in court how Mr. Couzens confronted Ms. Everard in South London as she walked home from a friend’s house and conducted “a false arrest” for breaching lockdown guidelines, to get Ms. Everard into his car.

Mr. Couzens, who was a diplomatic protection officer with the Metropolitan Police, used his warrant card — a type of police identification card — before restraining her with handcuffs and then driving away, according to the prosecutor.

Her remains were discovered seven days later in wooded area near Ashford in Kent, roughly 60 miles from London.

Sarah Everard. The crime set off a national movement as women shared their own stories of harassment on the streets.Credit…-/Agence France-Presse, via Metropolitan Police/Afp Via Getty Images

Mr. Couzens had worked on Covid patrols a few months earlier, the prosecutor told the court, giving him an understanding of the protocols regarding potential lockdown breaches.

A witness passing by in a vehicle saw what was happening and noted that it looked abnormal, but thought it was just a police officer detaining a woman “who had done something wrong,” the prosecutor told the court.

Footage from surveillance cameras showed that Ms. Everard complied with Mr. Couzens’ demand to get into the car, as she most likely believed she was being arrested.

Rights groups reacted with outrage to the new information.

The Women’s Equality Party said the abduction in this manner was “a disgusting abuse of power,” and called for an independent inquiry into sexism in the Metropolitan Police force and for violence against women and girls to be treated as a national threat.

“Women cannot be expected to trust the police when we have to live with the fear of this,” the party said in a statement. “Misogyny is steeped in our institutions.”

Many have been critical of the failure by the police to investigate allegations of other sexual offenses by Mr. Couzens before the murder of Ms. Everard, including reports that he exposed himself in public days before the attack.

On Wednesday, London’s Metropolitan Police posted a statement ahead of the sentencing hearing acknowledging that Mr. Couzens’ “actions raise many concerns.

“We are sickened, angered and devastated by this man’s crimes which betray everything we stand for,” the police said in a statement.

Ms. Everard was reported missing by her boyfriend the day after being abducted, when she failed to return home, and soon a missing persons poster spread on social media.

Crowds gathered in London’s Parliament Square in March calling for an end to violence against women and girls after the death of Ms. Everard.Credit…Mary Turner for The New York Times

The urgency over her disappearance soon turned to grief and then anger after her body was found.

The crime set off a national movement as women shared their own stories of harassment on the streets and accounts of sexual violence, calling for action to address the issue of women’s safety.

It spurred street protests in the midst of the lockdown, with demonstrators calling for systemic changes to the way the police handle crimes against women.

The fact that Mr. Couzens was a police officer only intensified the public anger over Ms. Everard’s death. He could face up to life in prison for his crimes.

In July, after Ms. Everard’s murder and other instances of fatal violence against women, the British government announced a new strategy to tackle this type of violence. The measures included proposed harsher penalties for offenders and increased policing of public spaces.

After Ms. Everard’s death and subsequent protests against policing, Priti Patel, the home secretary, commissioned a report from an independent watchdog group to review the policing response to violence against women and girls.

The report, released this month, called for a “radical change of approach across the whole system involving the police, criminal justice system, local authorities, health and education.”

Do Germany’s Election Results Signal a Left Turn for Europe? 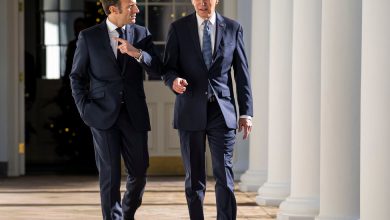