DHAKA, Bangladesh — Its name translates into “floating island,” and for up to 100,000 desperate war refugees, the low-slung landmass is supposed to be home.

One refugee, Munazar Islam, initially thought it would be his. He and his family of four fled Myanmar in 2017 after the military there unleashed a campaign of murder and rape that the United Nations has called ethnic cleansing. After years in a refugee camp prone to fires and floods, he accepted an invitation from the government of neighboring Bangladesh to move to the island, Bhasan Char.

Mr. Islam’s relief was short lived. Jobs on the island were nonexistent. Police officers controlled the refugees’ movements and sometimes barred residents from mingling with neighbors, or children from playing together outside. The island was vulnerable to flooding and cyclones and, until relatively recently, would occasionally disappear underwater.

So, in August, Mr. Islam paid human smugglers about $400 to ferry his family somewhere else.

“When I got the chance, I paid and left,” said Mr. Islam, who asked that his location not be revealed because leaving Bhasan Char is illegal. “I died every day on that island, and I didn’t want to be stuck there.”

Bangladesh is struggling to find a long-term solution for more than one million members of the largely Muslim Rohingya minority group who fled persecution in Myanmar.

The first plan — stick them on an island — looks increasingly difficult to pull off. Growing numbers of migrants are fleeing Bhasan Char, risking drowning in the waters of the Bay of Bengal as well as prosecution if they are caught by the authorities. For human rights groups, the exodus stands as testament to the deplorable conditions on the island. 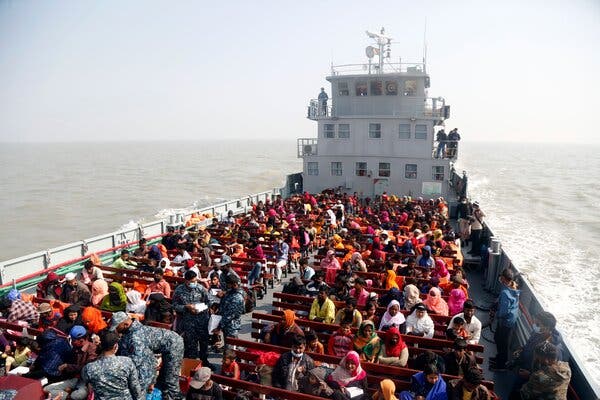 A group of Rohingya refugees aboard a ship arriving at Bhasan Char in December.Credit…Monirul Alam/EPA, via Shutterstock

“Thousands of Rohingya refugees are confined to the island and not granted permission to leave,” said Zaw Win of Fortify Rights, a human rights organization. “They lack freedom of movement, access to quality health care and livelihoods.”

The Bangladesh government, which hopes to eventually send the Rohingya back to Myanmar, said refugees will be happier once their relatives begin arriving and a local economy develops.

“A community needs to be developed there, and it requires more people to come to the island,” said Shah Rezwan Hayat, the country’s refugee, relief and repatriation commissioner. “Once more people start coming to the island, the existing people will not need to leave the island to meet their relatives.”

“We are working to develop the livelihood of the island,” he added. “But restrictions on their movement will continue. They won’t be allowed to move outside the camp. And they are served food every day, so it’s not Bangladesh’s responsibilities to arrange jobs for them to earn money.”

The Bangladeshi government hopes Bhasan Char will help alleviate worsening conditions for refugees elsewhere. At the moment, nearly 890,000 Rohingya live in camps along a coastal region in eastern Bangladesh called Cox’s Bazar, according to the U.N.

The refugees disembarked to an island prone to flooding.Credit…Rehman Asad/Agence France-Presse — Getty Images

Bhasan Char is one of a number of unstable islands made largely of silt from the Meghna River, which empties into the bay. The island became permanent only in recent years, when the surrounding area was dredged to build an earthen embankment around the island.

The island may not be as permanent as it might appear, however. Environmental experts say Bhasan Char’s existence is under threat from climate change, which has worsened storms and sent sea levels rising. Human Rights Watch, in a recent report, said refugees and humanitarian workers alike fear that inadequate storm and flood protection could put those on the island at serious risk.

Nevertheless, the Bangladesh government has moved ahead with resettling Rohingya refugees there. They have built housing for more than 100,000 people, with a series of red-roofed dormitories checkering more than two square miles of the western side of the island.

The number of people trying to escape the island has become a growing problem. About 700 have tried to flee, according to the police, sometimes paying $150 per person to find rides on rickety boats. The police have arrested at least 200 people who attempted to leave.

“A community needs to be developed there, and it requires more people to come to the island,” said Bangladesh’s refugee commissioner. Credit…Mukta Dinwiddie Maclaren Archite, via Agence France-Presse/Getty Images

“When we catch them, we send them back to the island,” said Abul Kalam Azad, a police officer in the port city of Chattogram on the southeastern coast of Bangladesh. “They say they are mostly upset for not having any job in Bhasan Char. They are eager to work and earn money.”

Some simply want to see their families again.

Last year, Jannat Ara left her hut in Cox’s Bazar for a dangerous sea journey to take a job in Malaysia that would provide food for eight members of her family. Her boat was intercepted by the Bangladesh navy. She was sent to Bhasan Char, where she lived with three other women.

Alone and desperate to leave, in May she seized the first chance she could get to escape. Her parents paid around $600 for the journey back to Cox’s Bazar, she said. She traveled for hours in pitch dark before arriving back at the camp.

“Only Allah knows how I lived there for a year,” Ms. Ara said. “It is a jail with red roof buildings and surrounded by the sea from all sides. I used to call my parents and cry every day.”

Human rights groups have questioned whether the refugees at Bhasan Char have enough access to food, water, schooling and health care. In an emergency, they say, the island also lacks an ability to evacuate residents.

“The fear is always there,” said Dil Mohammad, a Rohingya refugee who arrived on the island in December. “We are surrounded by the sea.”

But the biggest worry, Mr. Mohammad said, is the education of his children.

Bhasan Char has housing for more than 100,000 people, with a series of red-roofed dormitories checkering more than two square miles of the western side of the island.Credit…Mukta Dinwiddie Maclaren Architects, via Agence France-Presse/Getty Images

“My elder son used to go to the community school when we were in Cox’s Bazar,” he said, “but he is about to forget everything he learned, as there is no option for him to study in Bhasan Char.”

The fear of being stuck on the vulnerable island without any means of getting out has led to protests against Bangladeshi authorities by the refugees. The protests began in May, when U.N. human rights investigators paid a visit. They continued in August after the boat incident, with protesters carrying signs criticizing the Bangladesh government and appealing to the U.N. to get sent back to Cox’s Bazar.

Mr. Islam, the Rohingya refugee who fled in August, was one of the protesters. But he was already thinking about getting out.

He lost three cousins during a killing spree carried out by the Myanmar military in Rakhine state in 2017. Once they arrived in Cox’s Bazar, he and his family built a hillside hut out of sticks and plastic tarpaulins and shared it with another family of three.

During hot summer nights, Mr. Islam said, he and the other man slept outside so that their children and wives could sleep comfortably inside.

The promise of an apartment on Bhasan Char held appeal. In January, while other families were forced to go there, he volunteered. They carried a few blankets and two bags of clothes.

He came to regret the decision. When he arrived back at Cox’s Bazar in August, he saw it with new eyes.