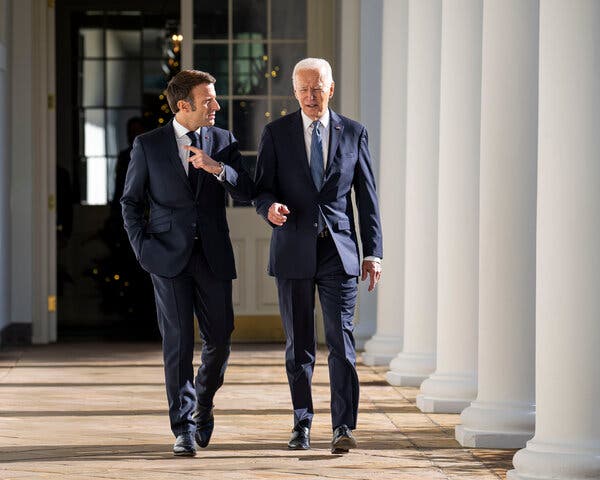 A united front from Biden and Macron

On a state visit from Emmanuel Macron, the French leader, President Biden said he would talk to Vladimir Putin, Russia’s president, but only in consultation with NATO allies and only if Putin indicated he was “looking for a way to end the war.” It was a significant show of trans-Atlantic unity.

Macron said that France would increase its military support for Ukraine and “will never urge Ukrainians to make a compromise that will not be acceptable for them.” In effect, the two leaders met each other halfway, with Biden showing more openness to a negotiated settlement and Macron showing more unequivocal support for the Ukrainian cause.

French officials said that during their meeting, the two leaders agreed that more Ukrainian battlefield gains would constitute important leverage in any talks with Moscow. In practice, negotiation seems unlikely at a time when Putin has nothing he can call victory, and Ukraine has military momentum.

Tone: The pair, oozing camaraderie, referred to each other as “my friend,” “Emmanuel” and “Dear Joe” throughout the day.

Menu: The dinner, with more than 300 guests, included butter-poached Maine lobster, followed by beef with shallot marmalade and triple-cooked butter potatoes — as well as a course of American cheeses.

China’s ruling Communist Party may be starting to back down on unpopular Covid restrictions in response to mass protests that have been the most widespread challenge to Beijing in decades. The party, to some extent and in some places, appears to be signaling a willingness to address the intrusive controls at the root of the public anger.

In the city of Guangzhou, residents returned to work yesterday for the first time in weeks after lockdowns were lifted. In Chongqing, some residents were no longer required to take regular Covid tests. And in Beijing, a senior health official played down the severity of current Omicron variants, a rare move for the government.

It is unclear how far the party would be willing to go in lifting restrictions or if the shift is led by Xi Jinping, China’s leader, who has been the chief enforcer of the country’s “zero Covid” policy. He has staked the party’s legitimacy on controlling the virus better than other countries, and any reversal or abandonment of the policy could undercut his authority.

Quotable: Sun Chunlan, the vice premier overseeing pandemic efforts, said for the second time in two days that the country was entering a new phase in its campaign against the virus. “After three years fighting against Covid, our medical and disease control system has met the challenge,” she said.

A Ukrainian cannon firing toward a Russian ammunition depot in the Kherson region.Credit…Finbarr O’Reilly for The New York Times

Russia is continuing its assault on Ukraine’s power grid, despite condemnation from world leaders as winter approaches. As Ukrainian officials warned that Russia was preparing to launch yet more missile strikes aimed at infrastructure, Russian officials insisted that the power grid was a legitimate military target.

Sergei Lavrov, Russia’s foreign minister, said that his country was using high-precision weapons against energy facilities that support combat operations and are used “to pump up Ukraine with Western weapons for it to kill Russians.” The Ukrainian military said that its forces used an autonomous energy supply and that the strikes had no effect on their fighting capability.

Even as crews race to restore basic utilities, new attacks threaten to undo their work. Ukrainian officials have appealed for help from the U.S. and Europe and are preparing centers where civilians can find warmth, light and internet access.

Details: Russian shellfire crashed into the power grid of the city of Kherson, officials said Thursday, cutting electricity. Ukrainian officials said that six million people across the country were still without power because of the airstrikes.

In other news from the war:

The Week in Culture

The U.S. Justice Department is taking steps to seize the Madame Gu, a 324-foot, $156 million luxury yacht linked to Andrei Skoch, a Russian steel magnate and lawmaker under sanctions. But doing so will be diplomatically thorny.

SPORTS NEWS FROM THE ATHLETIC

“Absolute catastrophe” for Germany: Despite beating Costa Rica, 4-2, yesterday, Germany crashed out of Qatar thanks to Japan’s shocking win over Spain. Germany, the 2014 World Cup champion, exited in the group stage in 2018 and this year.

The family tragedy of Aliou Cissé, Senegal’s “lion” of a coach: It’s been 20 years since a ferry sank off the coast of Senegal, claiming the lives of 1,863 people — including 12 members of Cissé’s family.

Christian Pulisic keeps coming up big for the U.S.: The American star shows his best form in the biggest moments, and after a frustrating start to the season with Chelsea, he is once again coming through when his country needs him most.

From The Times: Brazil’s World Cup team has become a political lightning rod at home after an ugly election. A championship might be the only thing that can bring Brazil together.

The greatest film of all time

A once-in-a-decade poll conducted by the British magazine Sight and Sound named the film “Jeanne Dielman, 23, Quai du Commerce, 1080 Bruxelles” from 1975 as the best ever made. Written and directed by the Belgian auteur Chantal Akerman when she was 25, the film is the first by a female director to top the list.

“Jeanne Dielman,” the first of several Akerman films that explore the interior lives of women, meticulously tracks the daily routine of a middle-aged widow, slowly building to a dramatic climax. Here’s why the film is important and where you can watch it.

Critic’s notebook: There are fewer films now that allow an actor to grow a persona and a Tom Cruise level of stardom, Wesley Morris writes. It’s a crisis, and the movies know it.

This jiggly Japanese cheesecake melts in the mouth.

Our television critics selected the best shows of 2022.

Go beyond carbonara and the Colosseum over 36 hours in Rome.

Here’s today’s Mini Crossword, and a clue: Have heart eyes for (five letters).

And here are today’s Wordle and the Spelling Bee.

That’s it for today’s briefing. Have a fabulous weekend, and see you next week. — Natasha

P.S. Sign up here for 31 days of delight and distraction over the month of December.

The latest episode of “The Daily” is on a Jan. 6 verdict.

You can reach Natasha and the team at [email protected].

Tags
From That Time Was With 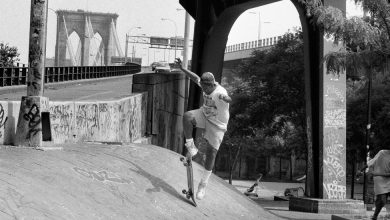