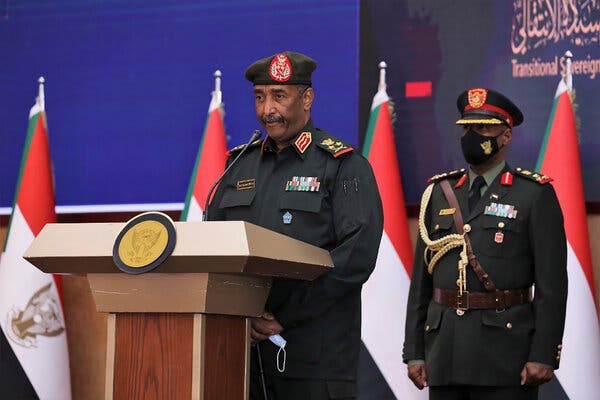 After four weeks under house arrest, Abdalla Hamdok, Sudan’s ousted prime minister, was reinstated yesterday. At a televised ceremony in the presidential palace, he signed a deal with the military intended to end a bloody standoff that has led to dozens of protester deaths and threatened to derail Sudan’s fragile transition to democracy.

The 14-point agreement met with a wave of anger on the streets. Vocal critics slammed it as an unacceptable concession to a military that has controlled Sudan for 52 years of its 60-year history and that has sought to weaken the democracy transition from the start in 2019. Police officers fired tear gas and live bullets at jeering protesters.

Hamdok will be allowed to form his own government, said a Western official familiar with the negotiations, though important points of contention between the two sides have not been worked out, including crucial arrangements for sharing power.

Analysis: “Hamdok preferred to become the secretary of a dictator over a symbol of an emancipatory movement,” said Magdi el-Gizouli of the Rift Valley Institute, a research body in East Africa. “Whoever marketed this as realpolitik underestimated the depth of the desire for change, and a new future, among the new generation in Sudan.”

A family scheduled for eviction waiting outside their home, owned by Cerberus, in Piera, near Barcelona, Spain, this month. Credit…Samuel Aranda for The New York Times

Protesters and activists in Barcelona are pushing back against foreign investment firms such as Cerberus, Blackstone and Lone Star, which have bought up thousands of homes in Spain and are now forcing out residents who can’t pay the rent after suffering financially during the pandemic.

In some cases, protesters have physically blocked lawyers and accompanying police officers from gaining entry to buildings where they intend to force people from their homes. As residents are pushed out of apartments, the group sends squatters to occupy properties owned by the firms elsewhere in the city — sometimes breaking in to gain entry.

The problem has caught the attention of Spain’s national government, led by a left-wing coalition. It has proposed the imposition of rent controls on investment funds and other large landlords, which would cap rent for owners with more than 10 properties in areas where rent increases have outpaced inflation.

Quotable: Miquel Hernández, a spokesman for the activist group War Against Cerberus, accused the firms of profiting from the economic distress caused by the pandemic. “They’re treating them like any other asset,” he said, referring to the homes.

In other virus developments:

The Tenke Fungurume mine, now controlled by a Chinese company, produces twice as much cobalt as any other country in the world.Credit…Ashley Gilbertson for The New York Times

China’s victory in the contest for clean energy

As the world’s largest economies shift to cleaner energy, countries rich in cobalt, lithium and other raw materials needed for batteries are suddenly playing the role of oil giants.

Since 2016, China has closed its grip on the global cobalt supply after it acquired major mines in the Democratic Republic of Congo, paving the way for the end of major U.S. investment in Congo’s cobalt and copper mines. China’s pursuit of the metal has given it anenormous head start in the race to dominate the electrification of the auto industry.

China’s cobalt mine acquisitions, an investigation by The Times shows, occurred after the U.S. essentially surrendered the resources, failing to safeguard decades of diplomatic and financial investments in Congo. Fifteen of the country’s 19 cobalt-producing mines are owned or financed by state-backed Chinese companies, some of which are accused of withholding payments and ignoring promises to their Congolese partners.

Background: The American president’s son, Hunter Biden, was part owner of a firm that helped facilitate a Chinese company’s purchase of one of the world’s richest cobalt mines from a U.S. company.

Thirty years ago, the brutal killing of a wealthy socialite became one of France’s most enduring murder mysteries. The subsequent conviction of her Moroccan gardener, Omar Raddad, above, who has always maintained his innocence, is now in question, thanks to new DNA technology — potentially reopening a case that has long unsettled France.

The real ‘House of Gucci’

From those first photos of Lady Gaga and Adam Driver in over-the-top après-ski looks on set, it was clear the biopic “House of Gucci” would be a spectacle. Gaga plays Patrizia Reggiani, the former wife of Maurizio Gucci, heir to the luxury brand’s fortune. In 1998, Reggiani — dubbed “the Black Widow” in the Italian press — was convicted of plotting Gucci’s murder.

Before her divorce from Gucci, Reggiani was an eccentric among the Italian jet set — she once said, “I would rather weep in a Rolls-Royce than be happy on a bicycle.” After Gucci was shot outside his Milan office in 1995, Reggiani told friends and reporters that she had wanted him dead. In her diary, on the day Gucci was killed, there was a single-word entry: “Paradeisos,” the Greek word for “paradise.”

In 1998, The Times called Reggiani’s trial “the ultimate real-life soap opera.” It combined “some of the country’s favorite obsessions: sex, money, designer footwear and astrology.” (Reggiani’s personal psychic was among the co-conspirators, admitting that she helped hire the man who shot Gucci at her client’s instruction.)

Reggiani spent 16 years in prison. Since getting out, The Guardian reports, she has often been photographed around Milan with a parrot perched on her shoulder. — Sanam Yar

Fans of a classic tarte au citron will love this cranberry version.

“King Richard,” about the father of Venus and Serena Williams, is an old-fashioned sports drama.

That’s it for today’s briefing. See you tomorrow. — Natasha

The latest episode of “The Daily” is about Belarus.

Sanam Yar wrote today’s Arts & Ideas. You can reach Natasha and the team at briefing@nytimes.com.