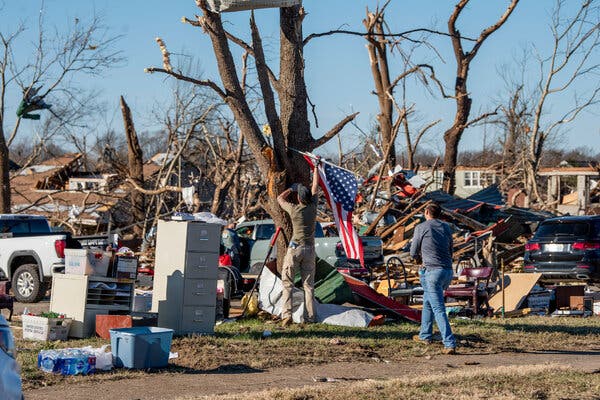 At least 90 people were killed by devastating storms across six states on Friday night, including at least 80 in Kentucky. The largest of the tornadoes, which left more than 220 miles of devastating destruction, will “ultimately be the longest tornado in certainly U.S. history,” Andy Beshear, Kentucky’s governor, said. Follow the latest updates here.

Scores of people remained unaccounted for last night, and there was dwindling hope of finding them alive as recovery workers across the middle of the country resumed their search efforts. The tornadoes tore through parts of Arkansas, Illinois, Kentucky, Mississippi, Missouri and Tennessee, the National Weather Service said.

At least 300 National Guard members were going “door to door, though many of these communities don’t have doors anymore,” Beshear said. Instead, he added, they were looking for survivors by “going rubble to rubble.” More than $2 million has been donated to help with recovery efforts, and the first grants will go toward funeral costs, he said.

Britain will speed up its coronavirus vaccine booster program to counter the rapidly spreading Omicron variant, Boris Johnson, the prime minister, announced last night. The government aims to offer booster shots to everyone eligible — adults over 18 for whom three months has elapsed since their second shots — by Jan. 1.

To reach the new goal, the National Health Service will have to defer some other medical procedures between now and the end of the year, Johnson said. The government plans to deploy 42 military planning units to help with the effort.

The first real-world study of how vaccines hold up against the Omicron variant, published by British government scientists on Friday, indicated that third vaccine doses provided considerable defense against Omicron, though there was a significant drop in protection after only two doses.

Alert level change: The government raised the Covid alert level from three to four — its second-highest level — amid signs that Omicron was spreading rapidly throughout the country.

Political climate: The announcement comes ahead of a potentially perilous week in which Johnson faces a difficult vote in Parliament on Covid restrictions that he announced last week, as well as an election in which the Conservative Party is at risk of losing a once-safe seat.

Here are the latest updates, maps and information about Omicron.

‘Our boat was surrounded by dead bodies’

The boat packed with migrants was about halfway across the English Channel, with its engine beginning to fail, when Zana Hamawandani, one of the passengers, spotted two orange life jackets bobbing in the rough seas. Only when they got closer was it clear that the vests contained dead bodies. Soon, other corpses began to appear.

“Our boat was surrounded by dead bodies,” said Karzan Mangury, another migrant aboard the boat. Mangury’s account, and those of others on the boat, are among the only witness descriptions of the last minutes of the disaster in which at least 27 people are believed to have died — the biggest loss of life in the channel since 2014, when records began.

Their descriptions also tell a story of hours of frantic and futile calls for help to the French and English authorities as the migrant boat was sinking. The British Coast Guard eventually rescued those on the struggling vessel, and a French fishing boat picked up two survivors of the sunken boat.

Back story: Reporters at The Times first heard about Hamawandani from his family, who feared he was among the victims of the disaster. A location app later indicated he and Mangury were at a migrant center in Crawley, a town in southern England.

Context: The disaster has injected a new sense of urgency into efforts by European countries to control high-risk channel crossings better. Activists say the deaths highlight the failures of the partnership between Britain and France to rescue migrants in distress.

The modernization of Notre-Dame’s interior has been given the green light, after experts approved proposals to bring in contemporary art and move some furniture to make more space for visitors. Critics say it will debase the centuries-old Parisian church.

Yoko and the band

If you’ve watched “The Beatles: Get Back,” Peter Jackson’s documentary about the making of the album “Let It Be,” you’ll have noticed Yoko Ono, sitting by John Lennon’s side and performing mundane tasks like opening mail.

“At first I found Ono’s omnipresence in the documentary bizarre” The Times’s Amanda Hess writes. But as more of the footage played, “I found myself impressed by her stamina, then entranced by the provocation of her existence and ultimately dazzled by her.”

Some people are seeing the documentary as proof that Ono wasn’t responsible for the band’s 1970 breakup, a rumor that, Amanda writes, was always tinged with misogyny and racism.

“What’s clear from the footage from these studio sessions,” Liz Kocan writes at Decider, “is that Yoko, despite her constant presence, didn’t try to make anything about her and doesn’t steer John away from the band at any point.”

But Ono was vigilant about not being a typical artist’s wife, Amanda writes. Or, as Ono herself said about women in rock in a 1997 interview: “My first impression was that they were all wives, kind of sitting in the next room while the guys were talking. I was afraid of being something like that.”

The best poetry of the year, according to our columnist.

Silent films shot by an American ornithologist in the early years of Irish independence offer a rare glimpse of 1920s Ireland.

P.S. Join us for a Times virtual event on Wednesday to explore the role of music in protest movements. R.S.V.P. here.

The latest episode of “The Daily” is about Peng Shuai, the Chinese tennis star.

Claire Moses wrote today’s Arts and Ideas. You can reach Natasha and the team at briefing@nytimes.com.

Your Monday Briefing: Flooding in Australia

Her Instagram Handle Was ‘Metaverse.’ Last Month, It Vanished.