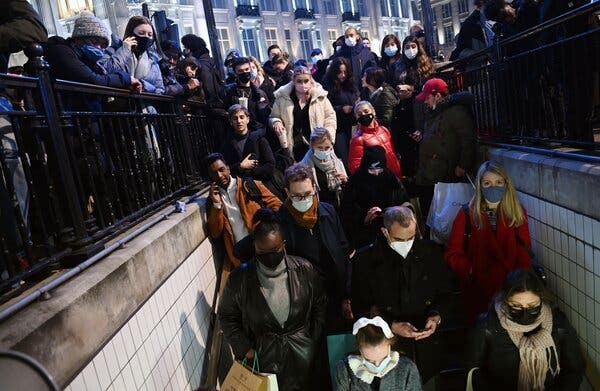 Commuters at Oxford Circus in London on Saturday.Credit…Andy Rain/EPA, via Shutterstock

With coronavirus cases in Britain exploding, driven by the highly transmissible Omicron variant, the government has not ruled out imposing further restrictions, the country’s health secretary said yesterday. So far, 85 people with confirmed Omicron cases have been hospitalized in England, and seven have died, after the country hit record case counts several days in a row.

Sajid Javid, the health secretary, did not deny speculation that the government was considering a two-week “circuit breaker” lockdown. The government’s emergency committee held a private meeting yesterday with national leaders about the rise in cases, and over the weekend London’s mayor declared a “major incident” — an emergency status that frees up resources.

Scientific advisers have warned lawmakers that more action is needed. The surge is threatening to overwhelm England’s health system, even after the government this month announced a long-resisted coronavirus contingency plan, urging people to work from home if possible and extending a face-mask mandate.

Political crisis: The fears of a public health emergency only days before Christmas have coincided with cascading troubles for Boris Johnson, the prime minister, including the resignation of David Frost, the Brexit negotiator and a key ally of Johnson’s.

Global vaccine failures: A growing body of research suggests most Covid-19 vaccines other than those produced by Moderna and Pfizer-BioNTech offer almost no defense against infection from the highly contagious Omicron variant.

The site of a strike in the Yabisat neighborhood in western Mosul, Iraq.Credit…Ivor Prickett for The New York Times

The human toll of years of U.S. airstrikes

A five-year Times investigation found that the American air wars in Iraq, Syria and Afghanistan have been plagued by deeply flawed intelligence, rushed and often imprecise targeting, thousands of civilian deaths — and scant accountability. The findings offers a sharp contrast to the U.S. government’s image of war waged by all-seeing drones and precision bombs.

The military’s own confidential assessments, obtained by The Times, document more than 1,300 reports of civilian casualties, many of them children, since 2014. Here are key takeaways and the first part of the investigation. The second installment will be published in the coming days. Read our magazine feature focused on the human cost of airstrikes.

Despite the Pentagon’s highly codified system for examining civilian casualties, pledges of transparency and accountability have given way to opacity and impunity. In only a few cases were the assessments made public. Not a single record provided includes a finding of wrongdoing or disciplinary action.

Records: The Times obtained the records through Freedom of Information requests and lawsuits filed against the Defense Department and the U.S. Central Command. Click here to view the full trove.

The Chinese tennis star Peng Shuai, whose account of sexual coercion by a former Communist Party leader ignited weeks of tensions and galvanized calls for boycotts of the Winter Olympics in Beijing, reversed her assertion that she had been sexually assaulted by the official.

The retraction, made in comments to a Chinese-language newspaper in Singapore, appeared unlikely to extinguish global concerns about her well-being and suspicions that she had been the target of well-honed pressure techniques and a propaganda campaign by Chinese officials. Her comments quickly drew skepticism from human rights advocates.

The Chinese authorities are likely to seize on her statement to the newspaper to push back against calls for a full investigation of her claims and to oppose the Women’s Tennis Association’s suspension of matches in China.

Turnaround: In a post last month on Weibo, a Chinese social media platform, Peng described how, in one encounter with the official, she had “never consented” and that she was “crying all the time.” But in the comments published in the newspaper, she said: “I want to stress a very important point — I never said or wrote that anyone sexually assaulted me.”

T Magazine asked six chefs and food experts to create a list of the 25 essential dishes to eat in New York City. The final selection of the most delicious and memorable plates in town, appearing in unranked, alphabetical order, is far from what you might expect.

The New York Times Faces Quiz offers a chance to see how well you know some of the defining personalities of 2021, featuring 52 familiar — or less familiar — faces. Give us the name that matches each face. (And, yes, we’re lenient on spelling.)

Play it here and see how well you do compared with other Times readers.

Traditional Yorkshire puddings rely on eggs and dairy for their crowning puff. This vegan alternative, from Paul McCartney’s daughter Mary, uses neither. Here’s the back story.

Set aside some time for holiday reading and explore these nine new books.

Why do women sprout chin hairs as they age? And what’s the best way to remove them?

Here’s today’s Mini Crossword, and a clue: How Google makes the bulk of its revenue (three letters).

P.S. Carlos Tejada, The Times’s deputy Asia editor and a fierce advocate for our journalism, died on Friday. He will be deeply missed.

The latest episode of “The Daily” is about the next phase of the pandemic.

West Ups Pressure on Putin, Including Sanctions on Reputed Girlfriend