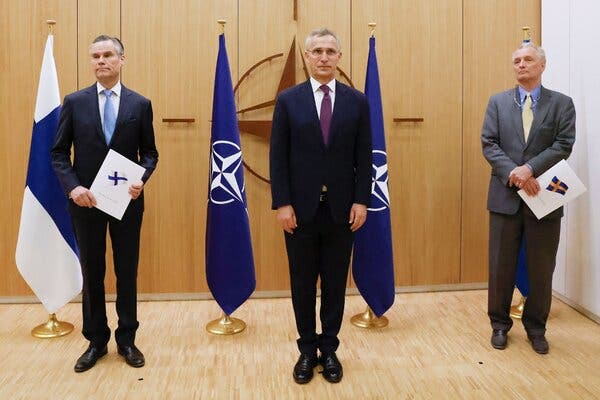 Finland and Sweden formally asked to join NATO on Wednesday, heralding what could be the alliance’s biggest expansion in decades, and one that would increase its presence on Russia’s doorstep.

But later in the day, Turkey, a NATO member, blocked an initial effort to move ahead quickly with the applications. Analysts said it was an attempt to squeeze out political concessions and win President Recep Tayyip Erdogan domestic accolades.

Turkey presented NATO ambassadors with a list of grievances. Most address the issue of Western support for Kurdish groups that it regards as terrorists. Turkey also wants to unblock military sales of American F-16s. Here are live updates.

Analysis: “He is trying to give a message: ‘You cannot discipline me and my country. You have to make a broad bargain with me about Turkey’s problems with the West,’” a professor of international relations in Turkey said of Erdogan.

Energy: The E.U. outlined plans to wean itself from Russian fossil fuels before 2027. But Prime Minister Viktor Orban of Hungary is also parrying Western diplomatic efforts: He continues to block even the watered-down effort.

The front: Doctors in eastern Ukraine are opting to amputate limbs rather than trying to repair them, a desperate attempt to save lives.

If North Koreans were placed under the kind of extreme lockdowns seen in China, experts say, the government would be unable to provide basic needs.Credit…Cha Song Ho/Associated Press

China has used strict lockdowns, mass testing and vaccinations to keep cases low throughout the pandemic. But outside health experts say an attempt to mimic its pandemic response could send Kim’s impoverished country into an outright catastrophe.

North Korea cannot feed its own people in the best of times, and lacks the basic therapeutics and food supplies that China has mobilized for the extreme restrictions seen in cities like Wuhan, Xi’an and Shanghai. It does not have vaccines, either, so people have developed no immunity against the virus.

History: North Korea’s state rations system collapsed during a famine in the mid-1990s, which killed an estimated two million people. It has never recovered. The country is so isolated that the outside world didn’t know about the famine until the bodies of famished citizens started washing up along the shallow river on its border with China.

Details: The suspected ​number of new patients in North Korea has soared from 18,000 last Thursday to hundreds of thousands a day today. Without enough testing kits​ to accurately measure the ​outbreak, the country has relied on figures for the number of “people found with fevers” instead of positive test results.

A new tactic for China’s censors

Beijing’s internet censors are starting to reveal the locations of users beneath their posts, a rapidly expanding practice which has further chilled online speech in China.

But the move increasingly links Chinese citizens’ locations with their national loyalty. Chinese people posting from overseas, and even from provinces deemed insufficiently patriotic, are now easily targeted by nationalist influencers, whose fans harass them or report their accounts.

Details: People writing from Shanghai, where bungled Covid-19 shutdowns have triggered food shortages, are called selfish by nationalist trolls. Those criticizing the government from coastal provinces near Taiwan and Hong Kong have been called separatists and scammers. And those who appear to be going online from abroad, even if they’re just using a virtual private network, are treated as foreign agitators and spies.

Background: The locations were first applied to posts that mentioned the Russian invasion of Ukraine, but have since expanded to most social media posts. The move follows months of online anger about Covid-19 lockdowns, which has sometimes overwhelmed the censors.

A Saga Between Tries, Novak Djokovic Again Aims for His 21st Slam

Rosmarie Trapp of the ‘Sound of Music’ Family Dies at 93

In Blow to Putin, Turkey Won’t Bar Sweden and Finland From NATO