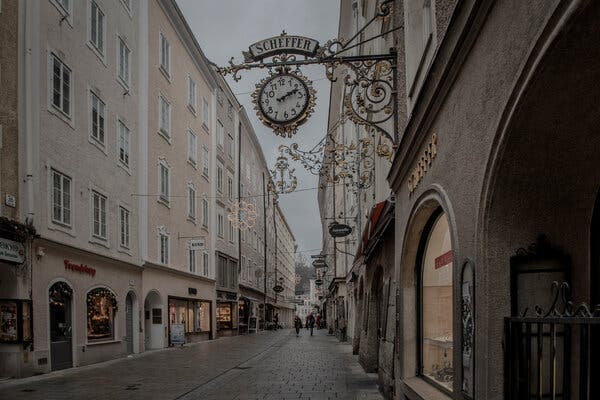 The streets of Salzburg were empty on Monday as Austria enters another coronavirus lockdown.Credit…Laetitia Vancon for The New York Times

As Europe experiences a menacing fourth wave of the coronavirus, Austria entered a nationwide lockdown on Monday, and the possibility of a vaccine mandate in Germany was under discussion as the only way to overcome the pandemic.

“Probably by the end of this winter, as is sometimes cynically said, pretty much everyone in Germany will be vaccinated, recovered or dead,” said the German health minister, Jens Spahn, who has spoken against a universal vaccine mandate.

The lockdown in Austria — in which people are allowed to leave their homes only to go to work, shop for groceries and pick up medicines — will last 10 to 20 days. It is the first lockdown of its kind in Europe this winter and comes after months of struggles to limit cases through widespread testing and partial restrictions. Austria has also announced that vaccination will be compulsory as of Feb. 1, the first Western country to take that step.

Germany has said it is not ruling out a lockdown, with officials calling it the worst Covid wave yet. Chancellor Angela Merkel said vaccinations alone were not enough, according to Bloomberg.

Other countries, including Slovakia and Greece, were imposing restrictions on unvaccinated populations.

Opposition: Protests erupted in Austria, the Netherlands, Belgium, Denmark, Italy, Switzerland and Croatia over the weekend against official crackdowns and vaccine requirements. The crowd in Vienna numbered 40,000, officials said.

Data: Austria, where 66 percent of the population is vaccinated, reported more than 14,000 new cases within 24 hours on Sunday. Over the past week, the Netherlands has been averaging more than 20,000 cases. Germany has reported roughly double that number of infections.

At 35, Peng Shuai is one of her country’s most recognized athletes, a doubles champion at Wimbledon and the French Open. State news outlets once hailed her as “our Chinese princess,” but she fought the state for control of her career — and won.

If anyone were able to break through the country’s icy resistance to #MeToo allegations, it would be someone like her. But she has been silenced by Beijing, and support for her online has been censored since she accused a former vice premier of sexual assault.

Over the weekend, the state’s propaganda apparatus produced a series of photographs and videos purporting to show Peng carrying on as if nothing had happened. And she appeared in a video call with the head of the International Olympic Committee.

But the rights group Amnesty International said the I.O.C. should be “extremely careful not to participate in any whitewash of possible human rights violations.” A #WhereisPengShuai campaign has taken root, and the official responses to her accusations have inflamed the criticism and frustration.

The group, which preserves the memories of those persecuted in the gulags of the former Soviet Union, grew in the period after the bloc’s collapse, when free expression could flourish. Now prosecutors are moving to liquidate Memorial International’s archive and human rights center. Two court hearings may decide the center’s fate.

Activists and dissidents consider the threat to Memorial a watershed moment for independent thinkers in Russia — a sobering example of the government’s determination to silence its critics and sanitize the narrative surrounding the Soviet Union.

Quotable: “Putin’s Russia builds itself on the denial” of the reform and social upheaval of the 1990s, said Aleksandr Baunov, editor in chief of the Carnegie Moscow Center’s website.

Details: On Tuesday, Moscow’s City Court will consider allegations that the center “justifies terrorist activities” because it included members of imprisoned religious groups as political prisoners. Later in the week, the Supreme Court will take up charges that the center violated a draconian “foreign agent” law.

Farmers shouting slogans during a mass rally in Lucknow, India, on Monday.Credit…Pawan Kumar/Reuters

Seventeen members of the Christian Aid Ministries were kidnapped in Ganthier, Haiti, in October.Credit…Adriana Zehbrauskas for The New York Times

A Cambodian temple looter sold away his people’s heritage. He’s trying to redeem himself.

The real ‘House of Gucci’

From the first photos of Lady Gaga and Adam Driver in over-the-top, après-ski looks on set, it was clear that the biopic “House of Gucci” would be a spectacle. Gaga plays Patrizia Reggiani, the former wife of Maurizio Gucci, heir to the luxury brand’s fortune. In 1998, Reggiani — called “the Black Widow” in the Italian press — was convicted of plotting Gucci’s murder.

Before her divorce from Gucci, Reggiani was an eccentric among the Italian jet set — she once said, “I would rather weep in a Rolls-Royce than be happy on a bicycle.” After Gucci was shot outside his Milan office in 1995, Reggiani told friends and reporters that she had wanted him dead. In her diary, on the day Gucci was killed, there was a single-word entry: “Paradeisos,” the Greek word for “paradise.”

In 1998, The Times called Reggiani’s trial “the ultimate real-life soap opera.” It combined “some of the country’s favorite obsessions: sex, money, designer footwear and astrology.” (Reggiani’s personal psychic was among the co-conspirators, admitting that she helped hire the man who shot Gucci at her client’s instruction.)

Reggiani spent 16 years in prison. Since she was released, The Guardian reports, she has often been photographed around Milan with a parrot perched on her shoulder.

More on the film: The Times has a Q. and A. with the costume designer, and The Cut breaks down some of the movie’s colorful accents.

The editors of the Times Book Review selected the 100 notable books of 2021.

Here’s how to clean vinyl records.

P.S. Molly Young, who wrote Read Like the Wind at Vulture, has brought the book recommendation newsletter to The Times.

The latest episode of “The Daily” is about the acquittal of Kyle Rittenhouse, an American who shot and killed two people at racial justice protests in Kenosha, Wis.

Sanam Yar wrote the Arts and Ideas section. You can reach Melina and the team at briefing@nytimes.com.

Australia will allow some visa holders to return in December.