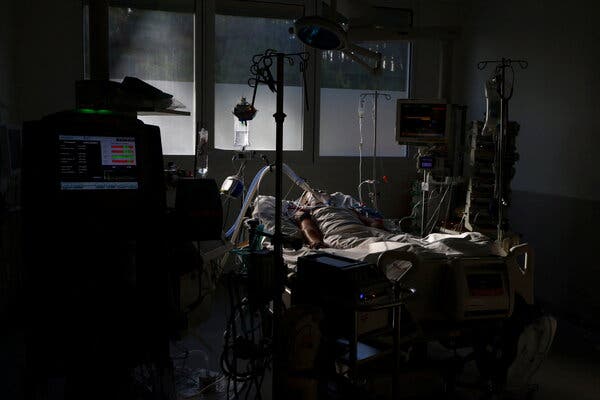 After two years of zigzagging policy and roller coaster emotions, terrible loss and tantalizing false dawns, closing borders and intermittently shuttered schools, people’s resilience across the globe has dwindled. For their leaders, this poses a quandary: How can they impose yet more restrictions on a fragile, exhausted populace after so much forced separation?

Yet the Omicron variant is a dismal reminder that the Covid era is far from over, dragging on like plagues of old. Health authorities in Denmark and Norway yesterday warned of a sharp increase in Omicron cases, predicting that the new variant will soon dominate both countries. England had already reported similar findings.

In the U.S., Covid has now been responsible for almost 800,000 deaths. One in every 100 Americans ages 65 or older has died from the virus. For people younger than 65, that ratio is closer to 1 in 1,400. The total number of known coronavirus cases in the U.S. yesterday surpassed 50 million.

Quotable: “I know it will only get worse, it won’t stop, the pandemic will only turn more life-consuming,” said Natalia Shishkova, a teacher in Moscow. “It is all chaos, like a fantasy film. You watch all these apocalypse films and realize their writers were real prophets.”

A protest against high gas prices in São Paulo, Brazil, in October.Credit…Amanda Perobelli/Reuters

A global wave of inflation is changing the political terrain for the right-wing populists leading countries like Turkey, Brazil and Hungary who have enjoyed wide support for years. Instead of the hot-button cultural issues that once stirred the electorate, voters are now primarily focused on the economy.

Prices are climbing faster than they have in almost two decades in Brazil, a country with a relatively recent history of disastrous inflationary episodes. In Turkey, the unorthodox economic policies of its president, Recep Tayyip Erdogan, have set off a full-on currency crisis. And in Hungary, voters are most concerned with the cost of living and low wages.

As the global economy began to heal from the pandemic this year, a combination of supply chain disruptions, central bank money-printing and government stimulus spending ignited a sharp rise in prices around the world. That prompted leaders in many developing countries to tweak their policies — and global investors to rethink their investments in those markets.

Related: Workers in Europe are increasingly demanding wages that keep up with inflation, which last month reached 4.9 percent.

How much trouble is Boris Johnson in?

Boris Johnson, the tousle-haired British prime minister, faces the most difficult stretch of his leadership yet: a threat of mutiny from his rebellious Conservative Party; collapsing poll ratings; and persistent questions about whether he or his staff flouted the very lockdown rules they imposed on the public by hosting a Christmas party last year.

The cascade of bad news is so extreme that it has raised questions about whether Johnson will even hang on to power until the next election. It is an ominous turn for a leader who has long defied political gravity, surviving scandals and setbacks that would have sunk many other politicians.

With no general election likely for at least two years, Johnson is not under immediate threat from voters. But if Conservative lawmakers feel it would be politically expedient, they can eject him through an internal leadership vote or a vote of no confidence. For the first time, political analysts and party members said, such a challenge seems plausible.

Analysis: “It’s not the end for him, but I think it’s the beginning of the end,” said Jonathan Powell, who served as chief of staff to a Labour prime minister, Tony Blair. “The problem is that these crises have a cumulative effect. As soon as he ceases to be an asset and the party is facing an election, they’ll get rid of him.”

By the numbers: Johnson’s rating has plummeted to 24 percent approval and 59 percent disapproval, the lowest of his tenure, according to a recent poll. The opposition Labour Party now leads the Conservatives by nine percentage points, its largest advantage since February 2014.

The raid, in the Indian city of Ahmedabad, came just after sunset. Plainclothes municipal workers swarmed into a busy neighborhood, seizing contraband as dealers scattered or watched helplessly. It was yet another successful crackdown on eggs.

The place of the humble egg — and other animal products — has become the latest flashpoint in the growing role of religion in everyday life under Narendra Modi, the Indian prime minister.

These 193 stories show the reality of climate change in every country in the world.

For the Golden Globes, the show must go on, even when there’s no show. NBC said it would not air next year’s ceremony because of ethical failings by the Hollywood Foreign Press Association, the scandal-ridden group behind the awards. Yet the H.F.P.A. has announced its list of nominees all the same — one only marginally more diverse than in previous years.

Some background: A series of bombshell reports in The Los Angeles Times and The New York Times revealed financial and ethical lapses within a cloistered membership with zero Black voters. Though the H.F.P.A has since claimed to be cleaning up its act, what little reforms it has made came only after a lot of heel-dragging and half measures.

While the group’s president, Helen Hoehne, projected positivity in her remarks yesterday, it remains unclear what form the Jan. 9 ceremony will take, especially after a rival awards show, the Critics Choice Awards, swooped in to claim the date for its own televised ceremony.

The best director category this year made room for two women, Jane Campion (“The Power of the Dog”) and Maggie Gyllenhaal (“The Lost Daughter”), and the race for best actor in a drama featured three Black contenders, Will Smith (“King Richard”), Denzel Washington (“The Tragedy of Macbeth”) and Mahershala Ali (“Swan Song”).

On the drama side, “The Power of the Dog,” “King Richard” and “Belfast” dominated, while in the comedy-musical categories, significant attention was showered on “West Side Story,” “Licorice Pizza” and “Don’t Look Up.”

You won’t miss the meat in this vegan Bolognese.

Transport yourself to the slopes of Mount Etna, in northeastern Sicily, where farmers have cultivated lush olive groves for millenniums.

“A Natural History of the Future,” by Rob Dunn, reminds us that we live on nature’s terms.

Here’s today’s Mini Crossword, and a clue: patriarch of the Roy family on “Succession” (five letters).

P.S. Women first voted in a general election in Britain 103 years ago today. In some places, The Times reported, they outnumbered male voters 10 to one.

The latest episode of “The Daily” is about the quiet death of the Steele dossier.

U.S. Unlikely to Deliver Aircraft to Israel Before 2024, Officials Say

West Ups Pressure on Putin, Including Sanctions on Reputed Girlfriend