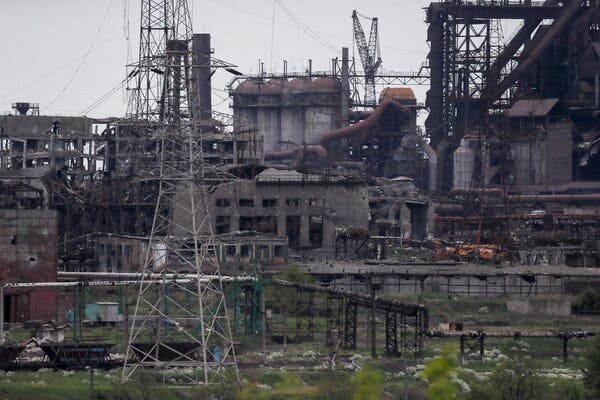 The Azovstal steel complex in the southern port city of Mariupol on Sunday.Credit…Alexander Ermochenko/Reuters

Russia appears to triumph in Mariupol

The battle to hold off Russian forces at the Azovstal steel complex in Mariupol ended yesterday in an apparent Russian victory, as Ukraine’s military declared an end to the weekslong “combat mission” there. Officials reported that fighters were being evacuated. Follow the latest updates from the war.

Volodymyr Zelensky, the Ukrainian president, saluted the defenders who had sheltered civilians and fought desperately under weeks of constant Russian assault, inspiring Ukrainians with their bravery. As the focus shifted to evacuations, he said bluntly and with a tone of finality, “We hope to save the lives of our boys.”

The victory was one of few bright spots for Russia, which has suffered repeated setbacks. After failing to seize the capital, Kyiv, and topple the government, Russian forces regrouped last month for what was meant to be a broad assault in eastern Ukraine. Until yesterday, they had not secured a single major strategic gain, even as their losses mounted.

Isolation: Vladimir Putin, the Russian president, met with his five closest international allies. Only one of them, Belarus, spoke up in support of his war. Moscow now appears to be focusing on a narrow objective: widening its holdings in Ukraine’s eastern region of Donbas.

U.S. troops to be deployed in Somalia

The U.S. military will once again deploy hundreds of Special Operations forces inside Somalia, a decision by President Biden that will largely reverse Donald Trump’s withdrawal of nearly all 700 ground troops who had been stationed there.

Biden also approved a Pentagon request for standing authority to target about a dozen suspected leaders of the Somali terrorist group Al Shabab, officials said. Together, the decisions will revive an open-ended American counterterrorism operation that has amounted to a slow-burn war through three administrations.

The number of troops to be deployed is expected to be capped at around 450, replacing a system in which members of the U.S. military made short stays to train and advise Somali and African Union forces. The Biden administration’s strategy intends to suppress Al Shabab’s ability to plot and carry out complicated operations.

Al Shabab: Intelligence officials estimate that the group, which formally pledged allegiance to Al Qaeda in 2012, has about 5,000 to 10,000 members. It has sought to impose its extremist version of Islam on the chaotic country in the Horn of Africa.

Élisabeth Borne during a handover ceremony on Monday in Paris.Credit…Pool photo by Christian Hartmann

With an eye on left-leaning voters, Emmanuel Macron, the French president, appointed Élisabeth Borne as the prime minister yesterday. The second woman to hold the position, she dedicated her nomination to young girls across France. “Nothing must slow down the fight for the place of women in our societies,” Borne said in a speech.

The decision is in line with Macron’s promise to prioritize environmental issues — Borne is a former minister of the environment — and a long-expressed wish to select a woman for that role, which he first stated in 2017. Macron’s failure to do so until now was often cited as evidence of insufficient efforts to advance the place of women in politics.

Borne, a career civil servant, has never held elected office and is not seen as harboring political ambitions. She will be running in legislative elections in Normandy in June and is seen as a competent centrist who will not alienate too many voters on either side of France’s left-right divide.

Alternative outcome: If the president’s political opponents prevail in parliamentary elections, they can force the appointment of a prime minister and cabinet to their liking — a situation that Jean-Luc Mélenchon, the leftist candidate, is hoping to achieve in June through a broad left-wing victory. Such occasions have been rare in France’s history.

News From the U.S.

Nuns are joining TikTok, offering a window into their cloistered experiences: special holiday meals, pranks and dances (sometimes with Jesus and sometimes with walkers). They lip sync, ride lawn mowers and play basketball.

“We’re not all grim old ladies reading the Bible,” Sister Monica Clare said. “There’s joy and laughter, the full range of human experience. The women in my community are very intelligent, very feisty. They know what they want.”

Rescuing the cuisine of besieged Mariupol

As a child, Olga Koutseridi would return with her family each summer to Mariupol, the coastal city whose name has become synonymous with the worst devastation Russia has inflicted on Ukraine and her parents’ hometown, where her grandmother lived until she was displaced by the invasion.

Since the war began, Koutseridi has begun collecting recipes from scattered family members via Telegram, Skype and WhatsApp. She researched archives in Russian, Ukrainian and English, and she contacted other Ukrainian expatriates and food experts around the world. “I had this urge to record,” she said. “It suddenly seemed like it was all going to disappear so fast.”

So far, she has collated 74 recipes, including her grandmother’s varenyky, dumplings stuffed with sour cherries and the cheese tvorog, her mother’s hearty but light borsch — the Ukrainian spelling of the dish — and fried eggplant slices showered with raw garlic.

Ukrainian food covers a wide territory, with countless influences over distance and time: from ancient Greece, the Ottoman Empire, the Carpathian Mountains, the Russian steppe and beyond. “Maybe now is not the time to celebrate Ukrainian food,” Koutseridi said. “But this feels like the only chance we have to preserve it.”

Read more about the cuisine of Mariupol.

This 15-minute dinner combines silky salmon with a vibrant medley of asparagus and peas.

Take an intimate look at Mexico’s Indigenous Seri people, who live in a stark, unforgiving and intensely biodiverse corner of the desert.

What to Listen to

In “Mr. Morale & the Big Steppers,” Kendrick Lamar grapples with the past.

And here’s today’s Wordle and the Spelling Bee.

P.S. The word “techopalypse” — about cratering tech stocks — appeared for the first time in The Times recently.

The latest episode of “The Daily” is on the racist theory fueling mass shootings.

Beware the Dangers of Sado-Monetarism