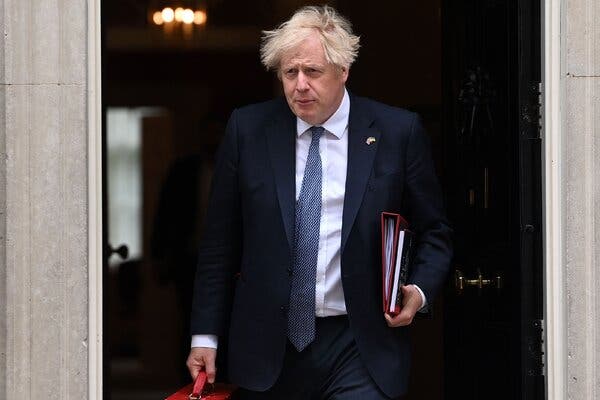 Prime Minister Boris Johnson will continue to lead the Conservative Party — and, therefore, Britain — after a dramatic late-night decision on Monday threatened his grasp on power.

In a secret no-confidence vote, which allowed even those who professed loyalty publicly to quietly withdraw their support, 211 out of 359 Conservative lawmakers voted for Johnson to stay in power. Here are live updates.

Johnson scraped by after he touted his prowess as a bona fide election winner: “I will lead you to victory again,” he told colleagues as he made his case. His cabinet publicly supported him before the vote.

But his days in power could still be numbered. Even by triggering a vote, lawmakers in his own party dealt Johnson a potentially lethal blow. The decision could have forced him from power a little more than two years after his landslide election victory.

He has survived other scrapes, but Johnson’s handling of the pandemic reached a new low. The vote came after claims that Johnson misled Parliament about lockdown-breaking parties held at Downing Street at the height of a coronavirus outbreak.

Background: Last month, a report painted a lurid picture of lawbreaking parties where staff members drank heavily, sang karaoke for hours, damaged property and, on one occasion, fought — while the public mourned relatives amid grinding lockdowns.

History: The last time a similar no-confidence vote took place was in 2018. Theresa May, then the prime minister, survived the contest but was still forced to resign several months later.

Analysis: Johnson has been brought low by the same baffling mix of strengths and foibles that propelled his rise: rare political intuition, and breathtaking personal recklessness.

Fighters in the armed wing of the National Unity Government.Credit…Agence France-Presse — Getty Images

Guerrilla fighters in Myanmar have started killing local officials appointed by the military junta as the movement to restore democracy evolves into deadly, daily warfare.

It is a David and Goliath strategy. The ruthless military, which has ruled the country since February 2021, has far more weapons at its disposal, so the resistance has to improvise. Organized battalions fight in the jungles; resistance groups carry out guerrilla attacks in towns and cities. The regime said that military-appointed ward administrators were being killed at a rate of more than one a day.

Civilians bear the brunt: The military is increasing its assault on the country, torching villages and waging a relentless bombing campaign. Experts say the brutality is a sign of the military’s inability to contain rebel forces and is “indicative of a loss of control on the ground.”

Geopolitics: Russia has been a major supplier of weapons to Myanmar’s regime. But as the war in Ukraine continues to drain Moscow’s resources, an expert said, the military junta will find it harder to get arms.

Details: The National Unity Government, formed by ousted elected officials and some ethnic leaders, says that it now controls half the country’s territory, and that it has more than 60,000 fighters in battalions and a similar number in local resistance groups.

Britain, embroiled in its own political scandals this week, has joined the U.S. in pledging advanced rocket systems to Ukraine. President Vladimir Putin has repeatedly warned the West against supplying Ukraine with such arms.

The British multiple-launch rocket system can hit targets up to 50 miles away. President Biden said last week that the U.S. would soon deliver a precision rocket system with a similar range, far beyond what Ukraine has in its arsenal. Here are live updates.

The fighting in eastern Ukraine has increasingly become an artillery war, and Western rockets could dent Moscow’s weaponry advantage in the battle for the Donbas. The barrages have exacted a heavy toll on the Ukrainian army: The Ukrainian government has said that as many as 100 soldiers are dying every day.

But there are complications: Ukrainian soldiers do not always know how to use high-tech weapons from the West. Some have been forced to resort to Google. “It’s like being given an iPhone 13 and only being able to make phone calls,” a sergeant said.

Monastery: One of the five holiest sites in the Russian Orthodox Church is directly in Russia’s line of fire. But even as shells kill monks and nuns, the monastery in eastern Ukraine remains faithful to the church — and to its pro-Putin leader, Patriarch Kirill.

Grain: Russia is trying to sell stolen Ukrainian grain to countries facing food shortages, most of them in Africa, the U.S. said. As hundreds of thousands of their people starve, governments now face a terrible choice.

Venomous, beautiful lionfish, native to the Pacific and Indian oceans, are wreaking havoc on Caribbean reef habitats. Some islands have started employing lionfish hunters and traps to try to cull the invasive predatory species.

Military aid. Britain said that it would join the United States in providing long-range rocket systems to help Ukraine hold off Russia’s assault in the east. The announcement came a day after President Vladimir V. Putin threatened to attack new targets if Western nations supplied Ukraine with the weapons.

On the ground. The seesaw battle for Sievierodonetsk, a city that is key to controlling the entire eastern region of Donbas, continues as the Russians ramped up artillery attacks and erased some of the Ukrainians’ gains. Ukrainian forces had clawed back ground in recent days in pitched street-by-street battles.

Grain exports. Russia is trying to sell stolen Ukrainian grain to countries in Africa, American officials warned. Western leaders have accused Russia of holding up food supplies in order to weaponize them; many countries across Africa and the Middle East have been facing alarming levels of hunger and starvation as a result of the blockade.

The secrets of an optical illusion

Do not be alarmed. The hole you see is not really moving, growing or expanding. The darkness will not swallow you.

Psychologists tested this static image on 50 people with normal vision, tracked their pupil dilation and published their findings last week. Most people saw the illusion, which gives insight into a disconnect between their vision and perception.

Pupils unconsciously adjust to the light in an environment, but the image itself isn’t changing. Instead, researchers hypothesized, the gradient makes it look as if the viewer is entering a dark hole or tunnel, prompting the pupils to dilate in anticipation. In other words: The brain is trying to prepare for the future.

Another famous example of this phenomenon is The Dress, a viral photograph that left viewers debating whether the dress was white and gold or blue and black. With the dress, as with the expanding hole illusion, our brains are making assumptions about what is to come based on past experience and visual inputs.

This elegant sesame, cucumber and avocado salad comes together in minutes.

“Metaphysical Animals” traces the careers and friendships of four women at Oxford who transformed moral philosophy.

That’s it for today’s briefing. See you next time. — Amelia

P.S. Our newsroom fellows started yesterday! The young journalists will spend a year in the Times newsroom. We can’t wait to see what they make.

The latest episode of “The Daily” is on the Depp-Heard trial.

You can reach Amelia and the team at briefing@nytimes.com.

A political escape artist finds his career on the brink.

Paul Vance, Lyricist Behind an ‘Itsy Bitsy’ Bikini, Dies at 92

Beware the Dangers of Sado-Monetarism