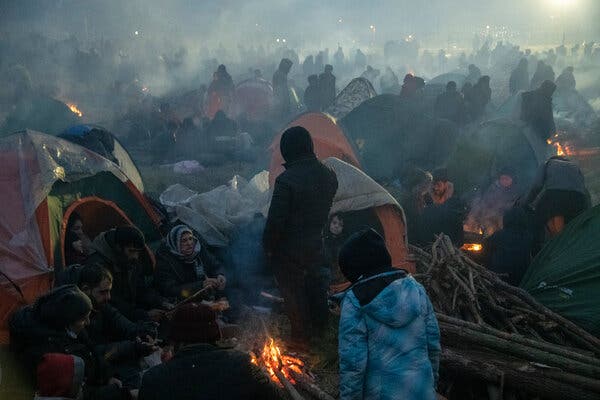 Migrants in the Belarusian-Polish border camps on Tuesday night after a day of clashes with the Polish authorities.Credit…James Hill for The New York Times

A dangerous melee at the Belarus-Poland border

Hundreds of desperate and increasingly angry migrants, marooned at the border between Belarus and Poland, stampeded toward a frontier checkpoint yesterday, hurling stones and debris at Polish security personnel a few yards away.

Polish officers responded with volleys from water cannons and blasts of tear gas. “I am angry,” one migrant said. “Everyone is angry. This is the last thing we could do. There is no other solution if we ever want to get to Europe.” At least 11 people have died at the border in recent weeks.

Hours later, Belarusian border guards began moving hundreds of migrants from their frozen encampment to the shelter of a nearby warehouse. It was not immediately clear what plans the authorities had for those they were moving, but many feared that the relocation was a prelude to deportation.

Context: Yesterday’s clash, the worst in a monthslong impasse on the European Union’s eastern flank, underscored the perils of a standoff between Belarus, a close ally of Russia, and Poland, a member of NATO and the European Union, each determined not to bend.

E.U.-Belarus relations: European officials have called the crisis a “hybrid war” engineered by Belarus’s leader, Aleksandr Lukashenko, to pressure the bloc into lifting sanctions on his country. Belarus insists that it is a humanitarian catastrophe created by Europe’s refusal to accept migrants.

Health workers carried coolers of the Pfizer Covid-19 vaccine during a door-to-door vaccination campaign on the outskirts of Lima, Peru, on Tuesday.Credit…Guadalupe Pardo/Associated Press

Pfizer’s Covid pill to be sold in poor countries

Pfizer, the pharmaceutical giant, announced a deal yesterday to allow its promising Covid-19 antiviral treatment to be made and sold inexpensively in 95 developing countries, mostly in Africa and Asia, many of which are lagging in their vaccine rollout. It follows a similar agreement by Merck.

“The fact that we now have two manufacturer-anywhere licenses for these two drugs is a big change, and it draws a big contrast with the restrictive licensing so far for vaccines,” said James Love, who leads Knowledge Ecology International, a nonprofit organization that researches access to medical products.

Pfizer has applied to the Food and Drug Administration to authorize the pill. The U.S. is planning to pay more than $5 billion for a stockpile, enough for about 10 million courses of treatment, after the company gears up production next year, according to people familiar with the agreement.

Challenges: The impact of the pills from Pfizer and Merck will depend on whether patients have easy access to Covid testing. The treatments must be given within a few days after symptoms start. Experts predict that will be more difficult in countries where people have less reliable access to health care providers.

Ethiopian soldiers parading at a rally organized by the authorities to show support for the military.Credit…Associated Press

A ‘climate of fear’ in Ethiopia

Hundreds, and perhaps thousands, of Ethiopians belonging to the Tigrayan ethnic group have been rounded up and detained in the capital and beyond in recent weeks. The crackdown comes amid a grisly war between the prime minister, Abiy Ahmed, and Tigrayan rebels in the country’s northernmost region.

Tigrayans had dominated the Ethiopian government and army for decades until Abiy took power in 2018 and sidelined their leaders. But since the war began, the Tigrayans have routed the Ethiopian Army in Tigray and swept south. They recently captured two strategic towns and threatened to advance toward the capital.

The resulting government roundups have swept up anyone of Tigrayan descent, many of whom had no ties to the rebels or even any affinity for them. Among them are older people and mothers. People have been seized off the streets, in their homes and even in workplaces and taken to overcrowded cells in police stations and detention facilities.

Background: The ethnically motivated detentions come amid a significant rise in online hate speech, which is adding fuel to the civil war that is tearing apart Africa’s second-most- populous nation. Antony Blinken, the U.S. secretary of state, who is traveling to Kenya, Nigeria and Senegal this week, has expressed worry that Ethiopia could “implode.”

On social media, Refaat Alareer, a professor at the Islamic University of Gaza, rages against Israel. But in the lecture hall, he studiously analyzes the work of some of the country’s leading poets — and surprises some of his students.

“Maybe this changed something in my mind about their experience,” one Palestinian student said of studying Israeli poetry. “It’s like we share things. We relate.”

The ‘Fearless Girl’ statue is in limbo

A bronze statue of a girl with fists on her hips first appeared a short distance from Wall Street in 2017. Since then, her defiant expression has captured the imagination of women looking for a symbol of economic empowerment, and she became known as “Fearless Girl.”

“Fearless Girl” has since 2018 graced the steps of the New York Stock Exchange — but she may be facing eviction, Zachary Small reports for The Times, after public officials delayed a hearing on making the bronze a more permanent part of the city’s landscape. The artwork’s three-year permit to remain in place will expire on Nov. 29.

“We are being left in limbo,” said Kristen Visbal, the artist who created “Fearless Girl.”

The 250-pound statue was commissioned by the financial firm State Street Global Advisors to push for more gender diversity in the corporate world. Though thousands of tourists gather every year for selfies with the 4-foot-tall sculpture, detractors have called the work an act of “corporate feminism” and a “marketing coup” for a firm that months later agreed to pay $5 million mostly to settle gender-discrimination claims.

Read more about the uncertain future of “Fearless Girl.”

This hearty dish is inspired by moussaka, but is simpler to prepare.

“American Comics” offers a sweeping history of the medium, from the 19th century to “Maus.”

What to Listen To

Bruno Mars and Anderson .Paak pay tribute to 1970s R&B in their new album, “An Evening With Silk Sonic.”

That’s it for today’s briefing. See you tomorrow. — Natasha

P.S. Anthony Tommasini is stepping down as The Times’s chief classical music critic.

The latest episode of “The Daily” is about how U.S. school boards are emerging as a new battleground.

Mass Detentions of Civilians Fan ‘Climate of Fear’ in Ethiopia