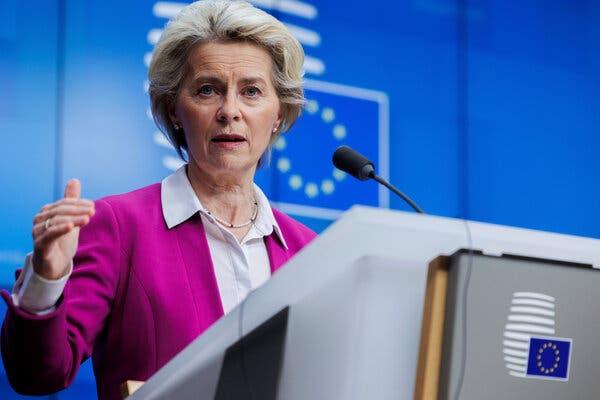 E.U. ratchets up its Ukraine response

A day after the European Union agreed to punish Russia with an oil embargo, European leaders announced a 9 billion euro aid package for Ukraine and moved to tackle a blockade of Ukrainian crops that is threatening a global food crisis.

The deal to ban most Russian oil imports by the end of the year exempts Hungary, whose leader, Viktor Orban, has friendly ties with President Vladimir Putin of Russia.

As European leaders wrapped up a two-day summit in Brussels, Ursula von der Leyen, the president of the European Commission, said the developing global food crisis was “only the fault of Russia,” which has seized or blockaded all of Ukraine’s Black Sea ports, preventing 22 million tons of grain from leaving.

On the ground: Fighting raged in Sievierodonetsk on Tuesday as Russian troops advanced toward the center of the city, which is the last in the Luhansk region of eastern Ukraine to remain outside Russian control.

The military: A new Russian commander, Gen. Aleksandr Dvornikov, was sent to Ukraine in April to oversee a refocused invasion in the east. U.S. officials say he is repeating the same mistakes in the new campaign that forced Russia to abandon its push to take the entire country.

Finances: European officials are pressing the U.S. to seize more than $300 billion worth of Russian central bank assets and give that money to Ukraine. But that could be illegal, U.S. officials warn, and may discourage other countries from relying on the U.S. as a haven for investment.

“They terminated all the youth in the area,” said Bara, a 40-year-old trader who was held captive for days in Moura.Credit…The New York Times

In Mali, a massacre with a Russian footprint

In late March, Malian soldiers in pursuit of Islamist militants arrived in the village of Moura and executed hundreds of men. But the soldiers weren’t alone. They were accompanied by members of the shadowy Russian paramilitary group known as Wagner, according to diplomats, officials and human rights groups.

In Moura, Malian soldiers and their Russian allies looted houses, held villagers captive in a dried-out riverbed and executed between 300 and 400 people, mostly civilians, according to witnesses and analysts. The Malian authorities hailed the Moura attack as a major victory in their fight against extremist groups, claiming to have killed 203 fighters, but making no mention of civilian casualties.

The death toll in Moura is the highest in a growing list of human rights abuses committed by the Malian military, which diplomats and human rights observers say have increased since the military began conducting joint operations with the Wagner Group in January.

Context: Since the Wagner Group appeared in Ukraine in 2014, its operatives have been identified working in Libya, Syria and countries in sub-Saharan Africa. The group also mines diamonds, spreads disinformation and props up autocrats in an effort to grow Russia’s footprint.

Signing the trade deal in Dubai, in the United Arab Emirates.Credit…Anuj Taylor/Agence France-Presse, via Gpo/Afp Via Getty Images

Government ministers from Israel and the United Arab Emirates signed a free-trade agreement yesterday that, once ratified, would be the widest-ranging deal of its kind between Israel and an Arab country.

The speed at which the deal took shape — it was sealed less than two years after the establishment of formal ties between Israel and the Emirates — highlights the readiness with which Israel is now being accepted by some Arab leaders after years of diplomatic isolation.

Background: For decades, Israel was ostracized by all but two Arab countries amid an unresolved Israeli-Palestinian conflict. But in 2020, Israel established or improved relations with Bahrain, the U.A.E., Morocco and Sudan, reflecting a shift in those countries’ priorities away from a Palestinian state and toward building a united front against Iran.

Whatever your connection (or lack thereof) to baseball, you may find something to like in the Savannah Bananas. This collegiate summer league team in the state of Georgia has amassed a huge following by leaning into entertainment — including on-the-field dancing. They also wear stilts, crowd surf and sing karaoke.

The Banana method is working. While major league games can sometimes attract fewer than 3,000 fans, the Bananas have sold out every home game at their 4,000-seat stadium since the team’s founding in 2016.

Cuba’s amateur boxing program is the best in the world: Fighters have won 15 Olympic medals since 2012, compared with nine for the U.S. during that time.

Now, 60 years after the island nation outlawed professional sports, Cuban boxers are stepping into the prizefighting chase. In May, Cuba’s communist government blessed a move to allow boxers to fight professionally.

The move expands opportunities for competition. But money also matters. The national team’s base salary is just 3,500 Cuban pesos a month, the equivalent of a dollar a day, while each Olympic gold medal earns a fighter the equivalent of $300 per month for life.

Under a deal with Golden Ring, a Mexican promotional company, boxers will keep 80 percent of the net pay from each fight. The remainder will be divided among coaches, medical staff and the national federation.

The athletes interviewed by The Times seemed pleased with the new arrangement, saying they hoped the deal would stem a wave of defections that has risen in their sport in recent years.

This ham and jam sandwich is an expansion of the Parisian sandwich known as jambon-beurre: jam for sweetness, ham for salt and Dijon mustard for a little heat.

“Adriatic” is a travelogue that looks for Europe’s future on or near the eponymous sea.

Here’s a guide to biking from Italy to Croatia along the coast — and essential gear for a summer of cycling.

And here’s today’s Wordle and the Spelling Bee.

That’s it for today’s briefing. Thanks for joining me. — Jonathan

The latest episode of “The Daily” is on the police response to the Texas school shooting.

You can reach Jonathan and the team at briefing@nytimes.com. Amelia Nierenberg contributed to this newsletter.

I Thought Putin Invaded Only Ukraine. I Was Wrong.

A cap on the price of Russian oil comes with many questions.

NATO says it will significantly increase troops assigned to its eastern flank.